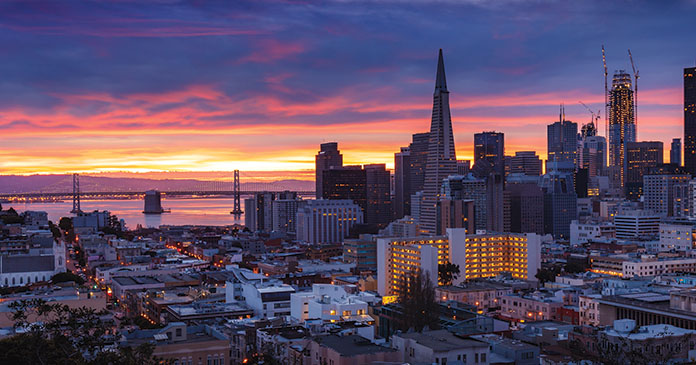 The apartment vacancy rate in San Francisco rose to 6.2 percent in May, according to apartment data firm RealPage. That’s up from 3.9 percent only three months ago, after stay-at-home orders went into effect and more people in the city decided not to renew their leases.

San Francisco’s median rent in May for a one-bedroom apartment was also down 9.2 percent compared with a year ago at $3,360 a month, according to listings platform Zumper.

That was still the highest monthly rent of all major U.S. markets, Zumper said, and a reminder of how steeply rents in the city climbed before their more recent descent.

In more recent years, a growing number of tech employees have flocked to San Francisco, with more opting to take buses to nearby Silicon Valley corporate campuses from the city rather than living in the suburbs.

Now, the pandemic is upending San Francisco’s workforce more than in most cities, remaking part of its corporate landscape. Several large, high-paying companies, including Yelp Inc., and Lyft Inc., have begun laying off workers in the city. LendingClub reported to the California Employment Development Department earlier this month that it was permanently laying off 306 San Francisco employees.

San Francisco-based startup Stitch Fix Inc., meanwhile, is looking to save costs by hiring or relocating staff to cheaper cities outside of California like Pittsburgh and Cleveland. PG&E Corp. said this month it plans to move to Oakland, ending more than 100 years in San Francisco.

Other Bay Area businesses are allowing their employees to work from home indefinitely, making some San Franciscans question whether it still makes sense to pay exorbitant rents when they no longer have to live in the same city as their office.

San Francisco isn’t the only high-rent city brought back to earth. In Manhattan, the rental apartment vacancy rate is now at its highest point in at least 14 years, according to a report by real estate appraiser Jonathan Miller and brokerage Douglas Elliman. And RealPage found that for all of New York City, renters are signing leases at more than 8 percent off asking price on average.

Meanwhile, home sales are booming in the city’s suburbs.

Other cities that experienced high rent growth, like Nashville, Tenn.; Orlando, Fla.; Atlanta, Ga. and Charlotte, N.C., have seen rental vacancy rates grow to 5 percent or more, according to data from RealPage.

In places where rents aren’t falling, price growth is easing.

The pace of rent growth has slowed in 27 major markets over the past year, including Seattle and Austin, Texas, with rents actually falling in 11 of those 27 markets in just the past month, according to real estate firm Zillow.

But Northern California is among the hardest hit. Rents for one-bedroom apartments are falling in San Francisco, San Jose and Fresno, and are close to flat in Oakland and Sacramento, according to Zumper. Rent cuts on new leases are 8 percent or more on average in both San Francisco and San Jose, RealPage said.

Still, a few hundred dollars shaved off the rent doesn’t bring prices down to what most people would think of as affordable.

The Bay Area has a higher rate of rent-burdened households than do most parts of the country, defined as households spending more than 30 percent of their gross income on rent.

San Francisco’s City Hall is helping out. Last week, it decided to make permanent a temporary eviction moratorium, which was put in place to protect resident from being evicted for failure to pay rent during the pandemic.

The many renters protected from eviction could actually be preventing the city’s vacancy rate from being even higher.

Some market analysts think tenants shouldn’t expect rents to fall much further. Prices of homes for sale are also not coming down, and that ultimately pushes more people in renting, propping up demand for apartments.

For now, however, it is a renter’s market for a change. Sandeep Giri and his wife, Sunita, began searching for a new San Francisco home in April. For the first several weeks, they offered less than the asking rent.

Rental managers wouldn’t even respond. But in June, the couple found a three-bedroom, single-family home with an asking price of $5,800. The Giris’ lower offer of $5,400 was accepted without question.

“We were really pleasantly surprised,” he said.

The hunt played out very differently when Giri rented his first apartment during the late 1990s dot-com boom. “We had to literally stand in a long line of applicants, with a résumé and our credit score all printed out in our hands and people would like, outbid you, right in front of you,” he said.