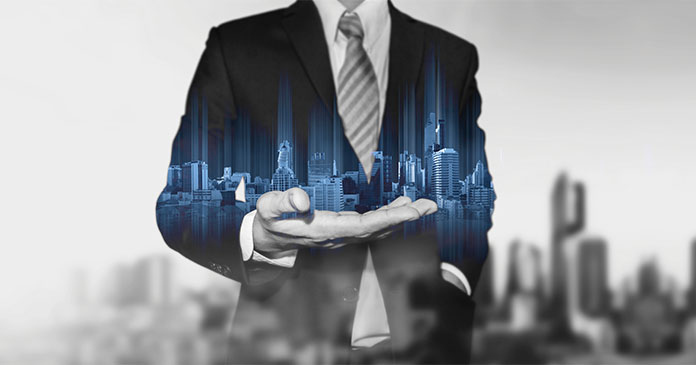 Most knowledge workers in 2020 are familiar with mixed reality tools like Zoom, Teams, and Slack that enable them to meet in virtual locations. By merging real and virtual worlds to produce new environments, employees who relied on in-person office interactions as recently as nine months ago now meet on virtual tropical islands, virtually “stand” in front of presentations beamed around the world, or maintain banter and team spirit with timely GIFs and emojis mixed into their workday messages.

But these experiences are just the tip of the iceberg of mixed reality offerings. Augmented reality technologies have become regular features in product offerings, along assembly lines, and even in surgeries.

Now, with 42 percent of American full-time employees working from home for the foreseeable future as the pandemic lingers, new forms of mixed reality technologies are creating mainstream virtual substitutes for offices, and redefining the future of work in the process.

These new mixed reality applications can help companies cut costs and boost revenues. Many companies we work with are using them to shrink their real-world office footprints by about a third on average and energize far-flung employees, many of whom are already more productive while working from home with no commute.

Longer term, companies will use mixed reality to create conditions for remote collaboration and innovation that are as good as, or even better than, in person. Below are three key areas where we see early versions of what could be called multidimensional “collaboratories” that are improving knowledge worker productivity and collaboration.

The reason: when distributed team members couldn’t see each other, they felt disconnected and isolated. A lack of serendipitous encounters hurt not only their morale, but also their ability to collaborate and innovate.

Now teams in some of the world’s largest financial services companies and retailers meet in virtual offices using mixed reality programs like Sneek and Pukkateam. These create a feeling of togetherness by showing colleagues in tiles with periodically updated snapshots, so they know who is at their desk, on a call, or drinking a coffee and perhaps up for a chat.

With a mouse click, teammates can instantly turn a snapshot into a live video call, eliminating the burden of setting up videoconferences. Meanwhile, team chat messages with a steady flow of emojis, status updates (“gotta connect the kid to school!”) and GIF-supported jokes keep the work atmosphere fun, friendly, and open. For teams that prefer not to display their actual images throughout the day, other programs like Sococo rely on avatars to bring employees together across continents in illustrated virtual offices complete with conference rooms, guest waiting areas and pantries.

Demand is also growing for artificial intelligence-powered virtual focus groups that permit companies to go beyond what’s possible in physical conference rooms. Virtual environments created by platforms like Remesh enable companies to tap into the kinds of insights gleaned from small focus groups but at the scale of massive digital surveys, without the drawback of only capturing one-way feedback.

Companies use these platforms for market research. They collect and summarize the anonymized views of up to 1,000 participants on a topic or new product concept. Equipped with an artificial intelligence and upvoting engine that clusters and aggregates responses, facilitators can also react and adapt the discussion in real time to explore ideas as they arise.

Finally, companies are turning to mixed reality environments as a solution for running projects and brainstorming innovations. When the pandemic struck, many companies were forced to freeze projects and research and development because they could not convene the people involved in person.

But some didn’t miss a beat, turning to collaboration tools like online sticky notes, shared digital whiteboards and live co-editing of wikis, slides and documents to bring people together. One bank we worked with this summer, for example, discovered that it could design and launch a new digital banking business line and product in a virtual workspace just as well, and in a fraction of the time, as it had one year earlier for another product, when it flew in people to brainstorm in person.

A major reason for this success was that the combination of video, voice, chat, and collaboration tools created more opportunities for all team members to contribute, rather than be drowned out by those with loud voices or a forceful presence—or if they simply missed the session because they couldn’t fly in. With greater representation in the virtual room, teams were able to realize better and more holistic solutions in a way that just wasn’t happening before.

The anonymity and scale of the online platform let managers hear more voices, including those who typically would not speak up in person. More employees participated, as peers freely validated each other’s observations. One participant said they had “never felt this listened to before.” The quantifiable data, quotes and revealing themes provided by the platform’s artificial intelligence engine showed that inappropriate behavior was not isolated to pockets of the firm, convincing the bank’s leadership team to commit to improve diversity and inclusion.

More ideas were shared and reviewed simultaneously on multi-editor collaboration tools than if they all had to flow through a live facilitator at a whiteboard. And the outputs were instantly well-formatted and digital, so they could be immediately used in reports and documentation—as opposed to another cryptic whiteboard photo.

We are just starting to see what the future of mixed reality work will look like. A year ago, nobody would have believed we would work from home at the scale we are now. Yet practically every large corporation we speak with today is asking for innovations to make virtual working sustainably productive.

This will drive the next wave of mixed reality, with solutions like artificial intelligence tools that can create optimal rotations of “serendipitous” encounters across teams and functions; affordable home smart boards and large multi-monitor displays that will move virtual collaboration from laptop screens to a more immersive full-size format; 3-D printers that will allow design teams to physically test prototypes around the world from their home offices; and for things that can’t be produced at home, fast cross-town home deliveries by drones of virtual happy hour supplies like wine and painting kits.

Like the grainy Skype calls of 2010 that pre-dated today’s Zoom boom, mixed reality technologies becoming popular today will likely be far surpassed in the near future. Ten years from now, we will look at the current crop of virtual office, focus group and collaboration tools with the same disdain we now have for crackly phone calls.

Source Excerpt: Ethan Murray is a partner in Oliver Wyman’s Digital practice and part of the firm’s task force on post-COVID office and home working.