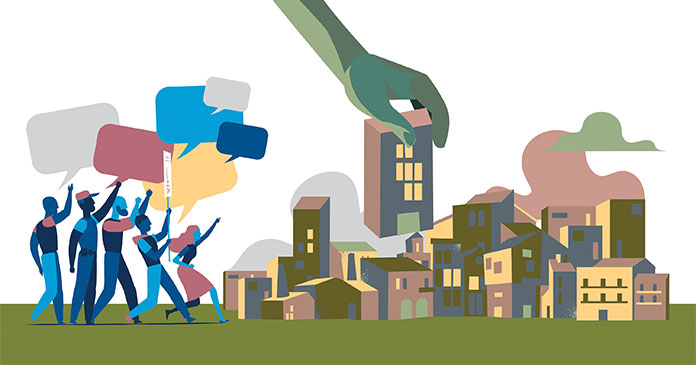 By any reasonable metric, the empty lot on the corner of First and Lorena Street in the Boyle Heights neighborhood of Los Angeles is a natural place to build housing. With a bus stop next door and an Expo Line light-rail station less than a quarter mile away, residents would enjoy an easy 30-minute commute to one of the densest business districts in North America. They could walk to daily necessities such as grocery stores, pharmacies, and restaurants, making car ownership mostly optional. And thanks to the energy efficiencies of multifamily living, folks moving in from the sprawl that otherwise defines L.A. would see their environmental impact plummet.

Yet when a local nonprofit developer proposed several years ago to build a 49-unit apartment building on the lot—with 24 homes set aside for disabled veterans experiencing homelessness—it was slammed with an environmental lawsuit.

A single angry neighbor was able to delay the project, thanks to a piece of legislation known as the California Environmental Quality Act (CEQA). Although a 189-page assessment found that all possible environmental effects could be mitigated, the suit demanded that planners spend years conducting additional environmental research. The site—covered in cracked concrete and lined with a barbed-wire-topped chain-link fence—remains empty to this day.

As incidents like the one at First and Lorena multiply, CEQA has emerged as an unexpected impediment to California’s going green. Across the Golden State, CEQA lawsuits have imperiled infill housing in Sacramento, solar farms in San Diego, and transit in San Francisco.

The mere threat of a lawsuit is enough to stop small projects—especially housing—from starting in the first place. Indeed, one of the main effects of CEQA has been to exacerbate the state’s crippling housing-affordability crisis.

The genesis of CEQA

How did such a conservative institution take root in one of America’s most progressive states? And what can California leaders do to get environmental review out of the way of saving the environment?

CEQA as we know it today is a bit of an accident. Adopted in 1970 under the auspices of then-Governor Ronald Reagan, the bill rode to passage on a wave of nationwide environmental consciousness.

With environmental disasters such as the Cuyahoga River fire and the trauma of highway-construction-related urban clearances fresh in the American mind, the concept was straightforward: The government should consider and mitigate the environmental impacts of public projects. Fifteen other states joined in with their own environmental-policy acts, most modeled on California’s approach.

The acts work like so: For any public project, the state must conduct an initial environmental study, considering a range of possible effects relating to issues such as air quality, noise, and protected natural areas.

If a project crosses certain thresholds—say, by encroaching too much on wetlands or generating too much stormwater runoff—the agency must conduct an environmental-impact report (EIR), extensively documenting all possible harms, setting out potential alternatives, and organizing public hearings for feedback.

In this sense, CEQA’s purpose is strictly informational: Legislatures and agencies are always free to go forward with a project, as long as they acknowledge, disclose, and mitigate its impacts.

In the early days, initial studies and EIRs were generally quite short, and covered only truly public projects. But in 1972, the California courts interpreted a “public project” to include any private development that required governmental approvals.

In cities such as San Francisco and Los Angeles, where almost nothing can be built without some form of discretionary permit, this effectively meant that every apartment building and office tower in the state now had to conduct an environmental assessment. Notably, no other state applies its environmental-policy act in this way.

Oh a litigious web we weave

This mandate wouldn’t have been such a problem if bringing a CEQA suit weren’t so easy. As a “self-executing” statute, CEQA is enforced by aggrieved parties requesting that a court mandate either a full environmental review—in cases where none was initially deemed necessary—or heavy revisions to an existing EIR.

Litigants can even file these lawsuits anonymously. In theory, the system was meant to protect those most affected by proposed projects. In practice, it has made CEQA the preferred lever of California’s infamously litigious NIMBYs (not-in-my-back-yards). Anyone with a few hundred bucks can drag developers to court, forcing projects to undergo years of delays and to pay hundreds of thousands of dollars in legal fees.

This mechanism has utterly transformed development in California.

For starters, enforcement by litigation adds risk to any project that has to undertake an environmental review. This risk is most acute in dense urban areas—particularly those with residents wealthy enough to bankroll lawsuits—making infill development in California prohibitively difficult.

In fact, attorneys at Holland & Knight estimate that 80 percent of CEQA lawsuits now target infill development. Others dispute these findings. Another study found that multifamily housing is the most popular target of CEQA litigation against private projects, while developments that would intuitively raise environmental concerns—think industry or mining—collectively make up less than a fifth of such litigation.

Habitat for Humanity of San Francisco learned this lesson in 2017, when it attempted to build 20 affordable homes on an empty lot in the heart of Redwood City, mere blocks away from a train station.

Thanks to one cynical neighbor’s CEQA suit, Habitat faced delays and mounting environmental-review costs. The project is only now nearing completion. Had Habitat proposed 20 homes out on the exurban periphery of the Bay Area, where new construction is less needed and less controversial, the project might already be full of people. But housing isn’t CEQA’s only victim; desperately needed infrastructure languishes in the name of the environment, as well. Although San Francisco’s bicycle plan encountered years of environmental litigation, typical suburban arterial roads tend to skate by unchallenged. In this way, CEQA has the effect of encouraging urban sprawl.

To minimize the risk of litigation, EIRs have ballooned into thousand-page documents covering potential impacts that few would normally associate with the environment. California’s CEQA Guidelines, which set the parameters for how environmental review must be conducted, have swelled from a 10-page checklist to a nearly 500-page tome, covering a range of issues including aesthetics.

In 2018, a proposal to redevelop a San Francisco laundromat as a 75-unit apartment building was held up on the basis that the developer had not fully considered the project’s effect on “community character.” This followed a similar bad-faith attempt by project opponents to get the laundromat—a squat, one-story building hemmed in by a parking lot—designated as a historic landmark.

A CEQA suit is now so terrifying to developers—the delays so long, the legal fees so excessive—that the mere threat of one is enough to force a developer to the table.

As with so much about California’s environmental-review law, this might sound great in theory. But in practice, it has given rise to the phenomenon of “greenmailing,” whereby special interests as varied as construction unions, neighborhood groups, and business associations can force concessions from a project before the public review even starts.

At times, this can end up looking a lot like extortion: In one recent case, a CEQA litigant allegedly demanded $5.5 million from a developer in exchange for dropping a baseless environmental suit.

This type of backdoor haggling represents a fundamental usurpation of the very idea of planning. If a lone NIMBY can second-guess the decisions of local city councils and city-planning commissions, what good are institutions such as comprehensive planning, public hearings, or disclosure requirements?

The original idea of CEQA was to strengthen the California planning process by informing the public. Instead, what we’ve ended up with is a system that subjects even humdrum infill proposals to obtuse multi-binder reports and shady dealings, leaving a housing-affordability crisis in its wake.

The good news about CEQA is that these problems are now widely recognized within the state. But what can California leadership do?

One solution has been to exempt more projects from review altogether. Since CEQA’s inception, certain small projects have always been beyond its scope.

In 2020, the state legislature expanded that list to include certain green transportation projects, including pedestrian, bicycle, and transit improvements along existing rights-of-way, though these exemptions will sunset in 2023. This move followed an earlier 2019 bill, which exempted homeless shelters and permanent supportive housing within Los Angeles from CEQA requirements.

To the extent possible, these exemptions should be made permanent and applied statewide.

For the infill housing that California so urgently needs, a simpler solution might be to free more development from discretionary permitting in the first place. If a project is “ministerial”—meaning that the government has no discretion in issuing the relevant permits—it doesn’t need to conduct a full CEQA study.

Cities such as Los Angeles and San Francisco could ease up on the strict zoning rules that force developers to seek discretionary relief in the form of special permits, rezonings, and site-plan reviews.

This would mean getting rid of onerous minimum parking requirements and exclusionary single-family zoning. But state legislators shouldn’t wait around: The shorter the state can make the time frame for infill housing, the better.

Creating a viable path to housing

Californians need fewer messes like the one at First and Lorena, and more projects like Jordan Court, a 34-unit North Berkeley development that will house low-income seniors. It’s the neighborhood’s first affordable- housing development in nearly 30 years.

All Souls Episcopal Parish, the project’s sponsor, was able to access streamlined permitting, thanks to S.B. 35. The 2017 bill, sponsored by State Sen. Scott Wiener of San Francisco, created a straight path to approval for affordable-housing proposals in cities that aren’t building their fair share—no CEQA required.

Without S.B. 35, the church today might have been embroiled in environmental litigation. Instead, it broke ground in the fall. Local NIMBYs who might have misused the 50-year-old law to kill the project aren’t happy. But at least 34 Californians will now have homes.

Author M. Nolan Gray is a professional city planner and a housing researcher at UCLA.