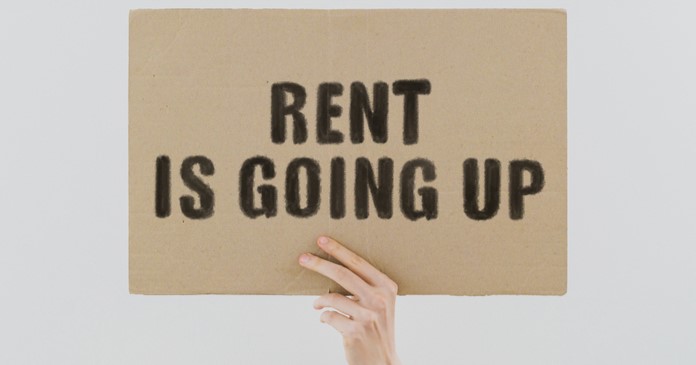 The latest rent report from Apartment List shows strongly positive rent growth for the country as-a-whole. In addition, rents were up for the month in all of the 50 largest metro areas.

Rents surge higher in May

The first chart, below, shows the history of the national average rent since 2017. This is the period in which Apartment List has been compiling this data. The chart shows that rents generally rise in the spring through summer before declining in the fall and winter. However, in recent years, rent growth has been consistently positive on a year-over-year basis. That is until COVID hit. 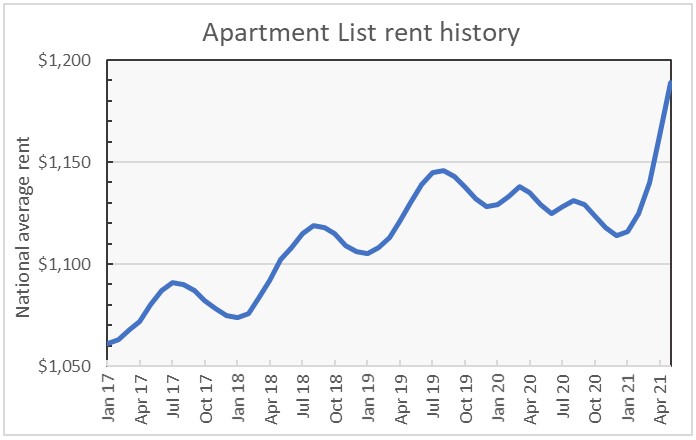 The chart shows that 2020 began with the same pattern as in years past but rent growth turned negative in the spring before rebounding somewhat in the summer. Rents fell in the winter as usual. However, rent growth has been unprecedently strong in the last few months.

The second chart, below, shows the annual pattern of rent growth for the years for which Apartment List has data. In each year, the level of rent in January of that year is set to a value of 100, so that the differences in the rates of rent growth throughout the year from one year to the next are more apparent. The chart makes clear how different the rent growth patterns in the years 2020 and 2021 are from those of the three preceding years. While rent growth stumbled its way through 2020, it has taken off like a rocket in 2021. 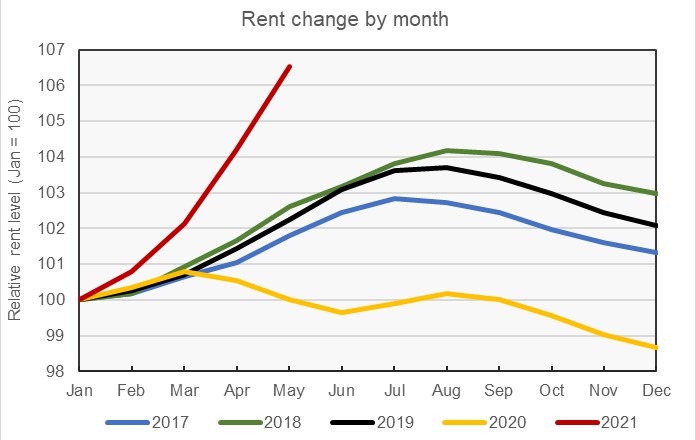 The first table shows the 10 metros with the largest annual rent decreases. For most of the metros, the rent drop in the core city of the metro area greatly exceeds that of the metro area as-a-whole. This is consistent with reports that renters have been fleeing the urban core for suburbs or exurbs. The other thing to note from this chart is that all of these metro areas experienced strong rent growth during the month.

There are metros with much bigger losses in rent levels than those listed in the table above, but they are smaller metros, so they did not make the list. The three showing the greatest drops in rent are the oil-patch metros of Odessa, Tex. (-24.6 percent), Williston, N. Dak. (-20.4 percent) and Midland, Tex. (-16.9 percent).

The major metros with the largest year-over-year rent increases are listed in the next table, below. The archetype for strong performance during the pandemic, Boise, is not listed because it is not a top 50 metro by population. However, for reference, its year-over-year rent growth hit 29.9 percent in May.