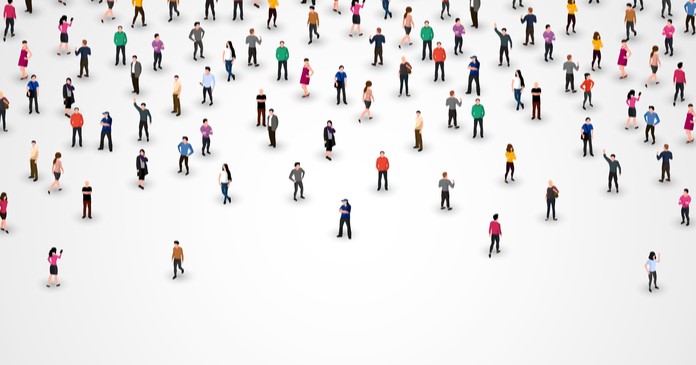 The latest Employment Situation Report from the Bureau of Labor Statistics shows that 3 out of the 4 jobs categories we track that are of interest to builders and operators of multifamily housing had flat or lower employment in July.

Total employment growth up for the month

The first chart shows the long-term history of the levels of employment in these four categories of the multifamily jobs market. 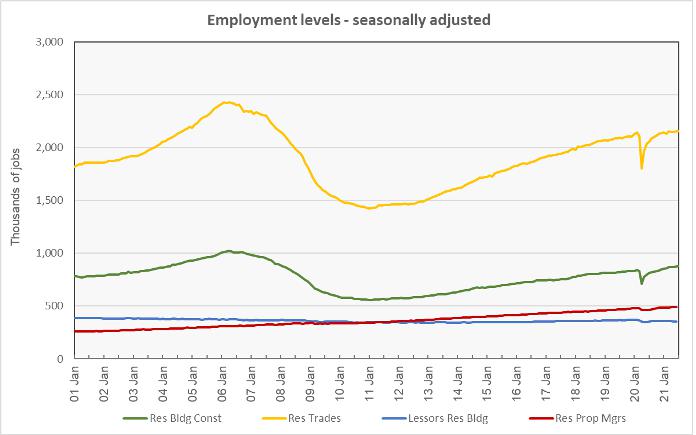 Employment in residential building construction in July, usually with general contractors, was reported to be up 8,300 (1.0 percent) from the revised employment level for June at 882,500 jobs. This is despite June’s preliminary figure being adjusted upward by 1,300 jobs. Employment in this category is now 5.1 percent higher than its level in February 2020, before the effects of the pandemic were felt.

Employment in residential building trades, i.e. plumbers, electricians, etc., in July was reported to be unchanged from June’s revised figure at a level of 2,157,200 jobs. However, June’s preliminary employment figure was revised downward by 2,000 jobs, so July’s preliminary figure is lower than the figure given for June in last month’s report. The employment level in this category is now 0.7 percent above its level in February 2020.

Total employment in these two categories of residential construction jobs combined was up 0.5 percent in July from the revised level of the month before and was 1.7 percent above its level in February 2020.

Employment for lessors of residential buildings fell again in June, dropping by 800 jobs (0.2 percent) to a level of 354,700 jobs. This is despite May’s preliminary figure being revised downward by 200 jobs. Employment in this category is now down 3.9 percent from its pre-pandemic level.

Total employment in these two categories combined is now 0.5 percent below its level in February 2020.

The final chart, below, presents the employment data in a slightly different format. It focuses on the monthly change in employment levels, based on weighted three-month moving averages. This shows more clearly the magnitudes of the jobs gains and losses for the the four categories of the multifamily jobs market that we track. 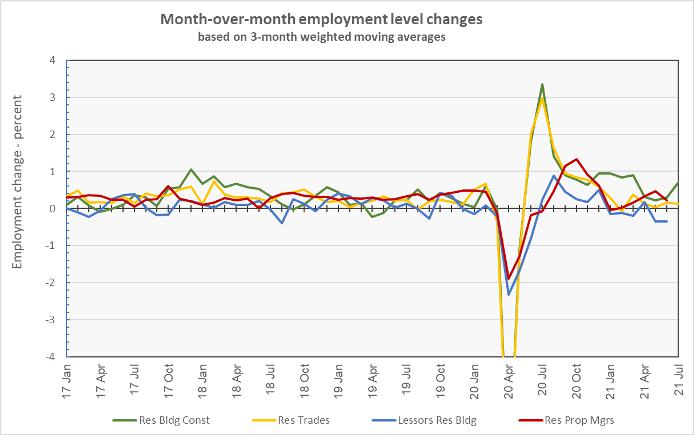