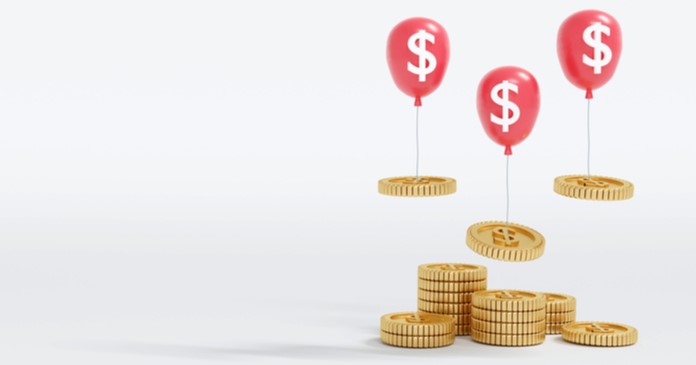 A pair of economic forecasts, one from Fannie Mae and one from the Federal Reserve predict higher inflation ahead and higher interest rates as a result.

The forecast from the Federal Reserve (Fed) was released in conjunction with the recent meeting of the Federal Open Market Committee (FOMC), which meets 8 times per year. The Fed forecast presents yearly figures through 2024 and a “longer run” forecast for the more distant future. The consensus Fed forecast is developed by the combining the forecasts of 18 economists. Each of the economists assumes that the Fed will follow “appropriate” monetary policy during the term of the forecast, although their individual ideas of what this policy is may vary.

The surge in inflation which started in May caught most forecasters by surprise. This has led to the frequent revision of inflation forecasts, mostly to predict higher rates of inflation.

Several of Fannie Mae’s recent PCE inflation forecasts are shown in the chart, below. It shows that Fannie now expects inflation to rise higher and last longer than in any of their other recent forecasts. It is significant that their forecast does not show inflation dropping back down to the Fed’s target level of 2.0 percent within the forecast period. 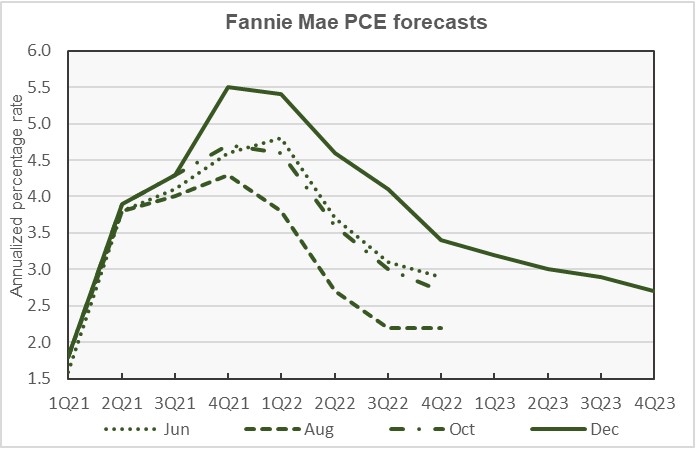 The history of the Fed’s recent annual inflation forecasts is shown in the next chart. It is clear that the Fed’s inflation expectations have risen throughout the year. 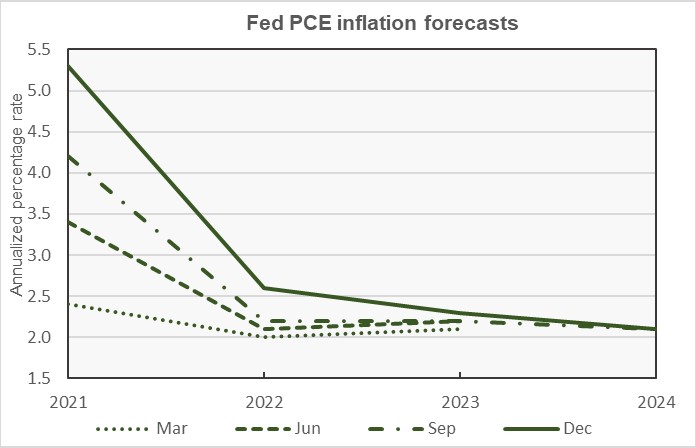 Keeping an eye on interest rates

The big news coming out of the recent Fed meeting was their accelerating the pace at which they plan to phase out their asset purchases and their rising expectations for the federal funds rate. The current forecast for this rate is shown in the next chart, along with other recent fed funds rate forecasts from the Fed. 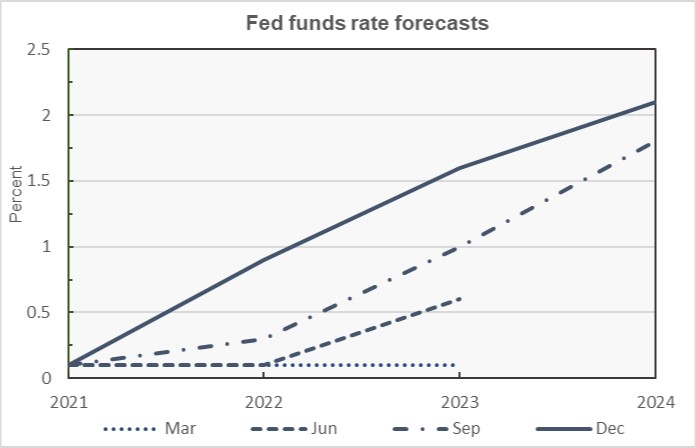 In September, the Fed had projected a federal funds rate of 0.3 percent in 2022. This implied a single increase in this interest rate of 25 basis points over the current rate of 0.1 percent. At the December meeting, this forecast was raised to 0.9 percent, suggesting that three 25 basis point increases may be made in 2022.

In recent economic forecasts, Fannie Mae has become more pessimistic about GDP growth in Q3 2021 but more optimistic about growth in Q4. While Q3 is history at this point, the trend continued for Q4 this month with the GDP forecast being revised upward to a 6.9 percent annualized growth rate. This was up from the 4.3 percent rate predicted in the last two monthly forecasts. At the same time, Fannie Mae is now predicting slower growth later in 2022 than they had done in their recent monthly forecasts. 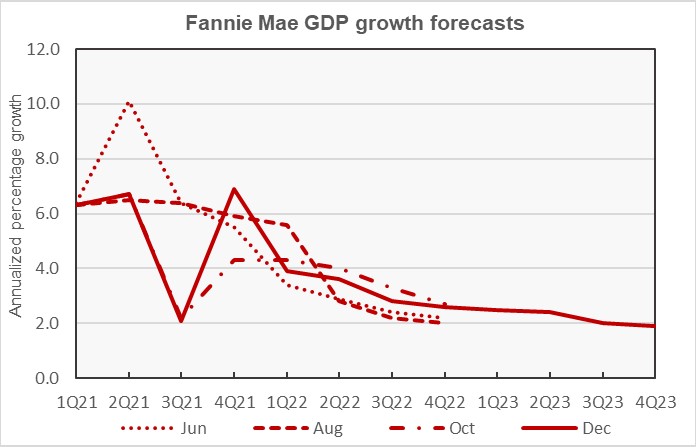 The Fed does not release quarterly projections for their economic metrics, instead focusing on each year as-a-whole. The Fed’s current forecast for GDP growth in 2021 matches that of Fannie Mae at 5.5 percent. This is down from the 5.9 percent GDP growth that the Fed predicted in their last forecast, released in September. That the forecasts from the two agencies would converge at his point is not surprising given that the year is nearly over.

The Fed’s current forecast for GDP growth in 2022 is now 4.0 percent, up from the 3.8 percent they forecast in September, and well above Fannie Mae’s prediction. However, the Fed agrees with Fannie Mae’s assessment that GDP growth will fall to 2.2 percent in 2023. Recent Fed GDP forecasts are illustrated in the next chart, below. 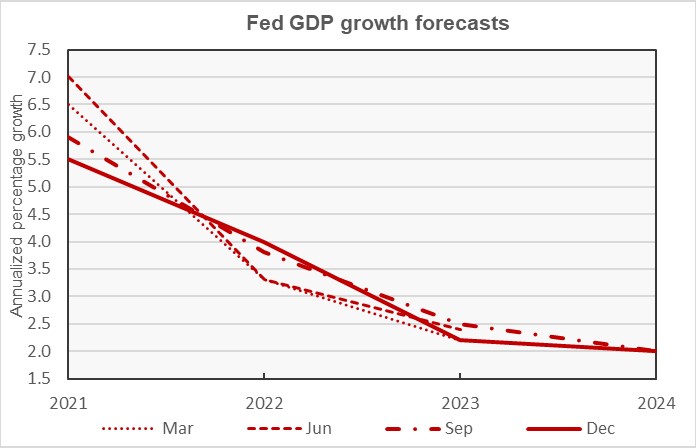 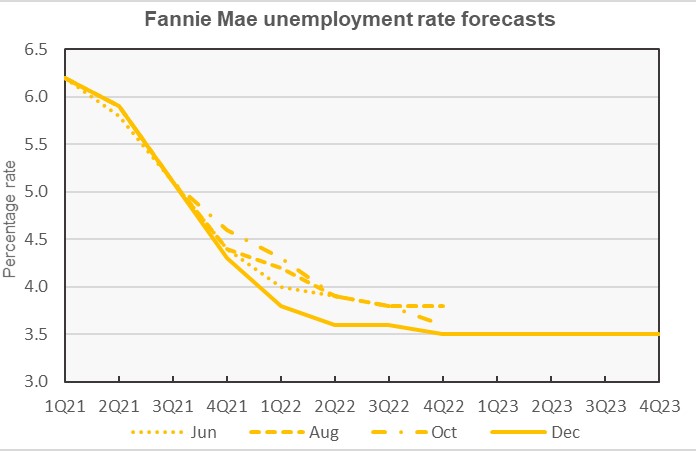 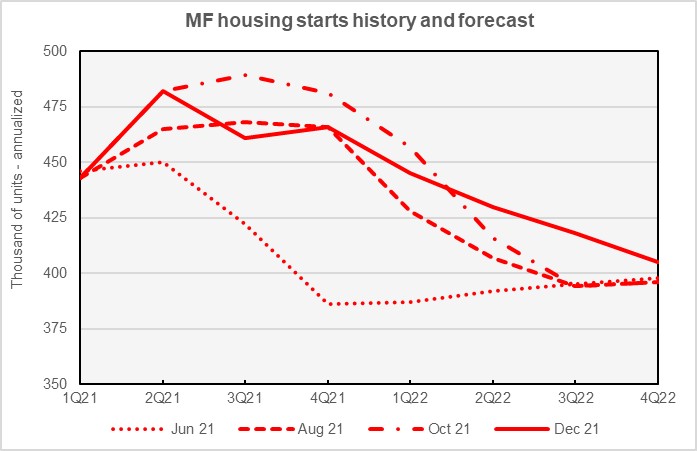 Fannie Mae’s forecasts for the single-family housing construction market is shown in the next chart below, along with older forecasts. The chart illustrates a more exaggerated version of the trend described above, with fewer starts in late 2021 followed by more starts in late 2022. For 2021 as-a-whole, Fannie Mae now expects single family starts to be 1,116,000 units, down 9,000 units from the level forecast in November. Fannie Mae has been revising their forecast of single family housing starts down steadily since April, when they were forecasting 1,236,000 starts. However, the forecast for single-family starts in 2022 was adjusted upward by 12,000 units to 1,191,000 units. 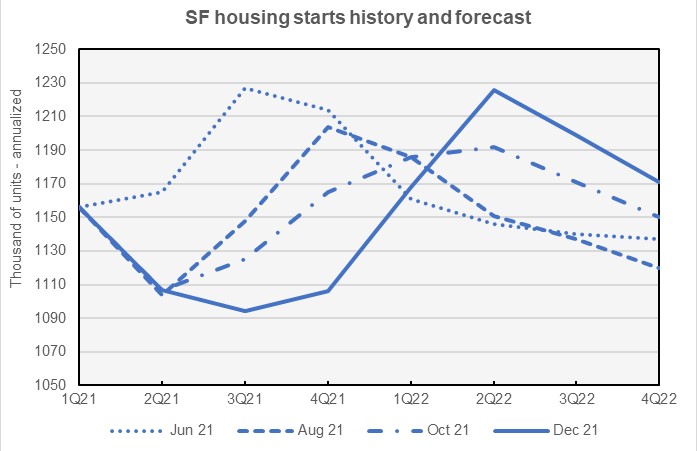 The Fannie Mae economic forecast summary can be found here. There are links on that page to the detailed economic and housing forecasts.