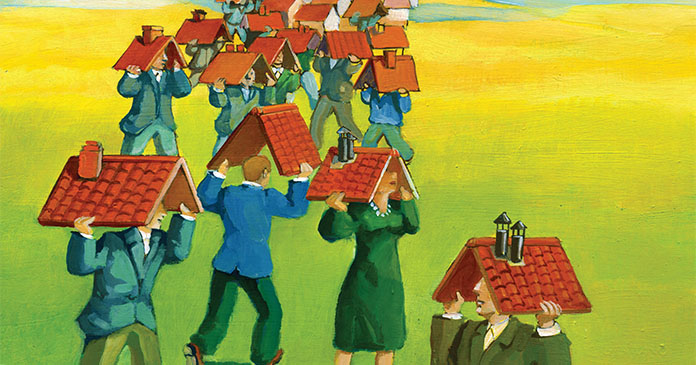 In a welcome departure from her predecessor’s indifference to the housing crisis in the New York City metropolitan area, New York governor Kathy Hochul included pro-housing development proposals in her 2022 State of the State message. I have noted that the details of the proposed legislation would determine its effectiveness, and Hochul has now released legislative language. It is mostly encouraging, save for uncertain effects of proposed property-tax exemption legislation.

The legislation to permit accessory dwelling units sets reasonable standards while overriding many of the devices that local governments might use to thwart homeowners from building such units. Accessory dwelling units are additional, smaller units on a lot occupied by a homeowner; they may be within or detached from the primary unit and can be rented for at least 30 days. Statewide, an extra unit must be permitted on any residential lot. In New York City, the legislation would require an amnesty for the many thousands of additional units in small homes constructed without building permits, including units in cellars and garages that can’t be legalized under current law. The city would establish health and safety standards that would enable the denial of permits. The details of such standards will affect costs, and thus the extent to which units are legalized.

I had expressed concern that the governor’s proposal to permit permanent residential occupancy of hotel rooms could lead to poor conditions for residents and the surrounding neighborhoods. The legislation now requires a regulatory agreement with a state or local housing agency, which will limit the number of conversions but provide communities with some assurance. Similarly, the legislation allowing the residential conversion of recently constructed office buildings in Manhattan south of 60th Street also requires a regulatory agreement for affordable or supportive housing. Given the costs of such conversions, this provision also will limit the number of conversions, and thus any adverse effects on office-based businesses.

The “transit-oriented development” legislation would require cities, towns, and villages in the New York City suburbs to permit new housing near train stations and bus stops with commuter parking, at a density of at least 25 units per acre. Such a density would typically be characterized by attached houses or garden apartments. Any applicant denied a permit would have recourse to the courts. The legislation, while a great step forward, unfortunately does not exclude such housing proposals from the state’s byzantine environmental-review process, which local governments can use to delay and perhaps deny housing-development applications.

By instituting much stricter affordability requirements on most eligible projects, proposed NYC property-tax exemption legislation would significantly curtail the availability of tax exemptions for new rental housing. Moreover, affordability requirements will in many cases be permanent, though the tax benefits would be time-limited. It’s not clear that these stricter requirements are consistent with the underlying economics that would allow the continued construction of large amounts of rental housing by private, unsubsidized developers in NYC. If new rental construction is curtailed, the city’s housing shortage will get worse. Hochul also proposes a new homeownership benefit for 100 percent middle-income housing, price-restricted for 40 years. This option might pick up some of the lost production, but the city will need to modify its Mandatory Inclusionary Housing requirements to allow the middle-income homeownership option to be used, pursuant to rezonings.

The proposals now go to the legislature, which has been far less interested in pro-housing supply measures than the newly converted governor. The legislature should forgo changes to the sound proposals that would make them ideologically palatable for leftists but practically unworkable—such as rent controls and onerous affordability requirements. On the New York City tax legislation, which Hochul has crafted as a sop to the city’s left-leaning legislators, the governor and the legislature need to work with the city government and the city’s real estate industry to draft a law that enables private investors in rental housing to make a profit. If they get it right, they could effectuate a genuine sea change in state housing policy.

Author Eric Kober is a former New York City planner and a senior fellow at the Manhattan Institute.

MassHousing closes on $21.4 million in refinancing and extension of affordability for Wilkins Glen in Medfield