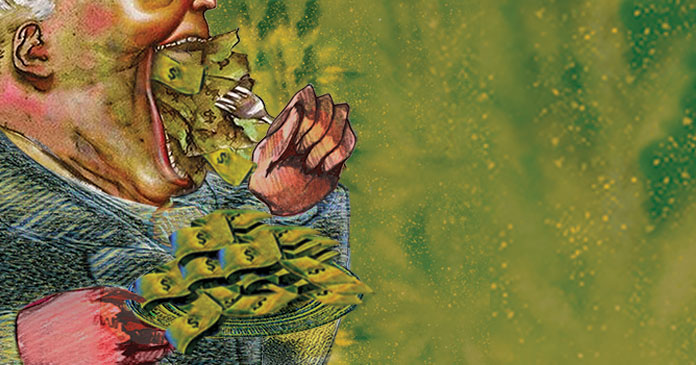 Seekers of freedom everywhere would do well to remember an indomitable, 16th-century Jesuit college professor named Juan de Mariana, who was dragged before the Inquisition and fought charges of treason during Spain’s 1609-1610.

The story begins on September 8, 1609, when men broke into the retired, 73-year-old college professor’s Jesuit monastery in Toledo, Spain, and leveled thirteen charges against him, including treason. Just eleven days earlier, Mariana had been brought before officials of the Inquisition to answer pointed questions about his latest book, On the Alteration of Money.

His supposed crime? Writing a new book that the king of Spain, Phillip III, didn’t much appreciate.

Given the septuagenarian’s well-known espousal of individual liberty and his profound skepticism over statist solutions, the new book may have been the proverbial straw that broke the camel’s back. In the eyes of the king and his government, Mariana had gone too far this time—not an altogether unjustified assessment, given that his ideas would eventually find their way into the battle cries of the American Revolution and into the United States’ founding documents.

The rise of classical liberalism

Though the roots of the classical liberalism that led to the American Revolution can be traced back through early Judeo-Christian writings to the works of Aristotle, many of liberalism’s basic principles were codified in the 16th-century by Mariana and other like-minded scholars during Spain’s Golden Age. Of course, Mariana’s new book did more than bluntly denounce the government’s manipulation of money and blame it for the nation’s crippling price inflation—though that was certainly enough in those days to justify an arrest warrant. The professor had also insisted that kings did not own the private property of their citizens and asserted that any king “who tramples everything underfoot and believes everything to belong to him” was nothing more than a tyrant.

Mariana even argued that nations do not have the right to tax the people without their consent, since imposing unapproved taxes amounted to stealing what belonged to them—all of which, of course, foreshadows one of the great political slogans of the American Revolution, “No taxation without representation!”

Indeed, the ideas discussed by Mariana in his new work built upon those he had initially put forth in his earlier, even more controversial, book, On Kings and Royalty. In that 1598 tome, Mariana had made the even more audacious claim that the people had the right to overthrow their rulers whenever they shut down their freedom of speech and assembly, seize their property unjustly, or impose taxes without their consent.

As the economist and economic historian Murray Rothbard points out in his book, Economic Thought Before Adam Smith, Mariana—who would be widely read in England during his final years and after his death—thus anticipated John Locke’s (1632-1704) theory of popular consent and the superiority of the people to their government.

He also was the forebear of the great English philosopher’s assertion that men establish governments in the first place to protect their natural rights. In phrases anticipating Locke’s and the Declaration of Independence’s justification of the right to rebellion, Mariana concluded that it was healthy for rulers to fear that any royal lapse into tyranny would lead to rebellion.

Released into the world of the late 1500s, these ideas were subsequently blamed for the assassination of the French tyrant kings Henry III and Henry IV, and as a result the book was banned and burned in Paris after an order issued by the Parliament of Paris on the ironic date of July 4, 1610—Mariana’s first experience with government censorship.

Still, as modern Spanish economist Huerta de Soto explains, “all Mariana did was to take an idea—that natural law is morally superior to the might of the state—to its logical conclusion.”

Indeed, the idea had previously been developed by another Spanish thinker credited with founding the field of international law, Francisco de Vitoria (1483-1546). Years before Mariana had drawn his conclusions, Vitoria had denounced the conquest and mistreatment of America’s native populations using the very same logic.

And Mariana’s influence in this regard did not end at Britain’s western shores: Thomas Jefferson discovered Mariana and even gave copies of one of his books to friends; and America’s second president, John Adams, included at least two of Mariana’s works in his library, including On Kings and Royalty.

The fight against monetary oppression

In any case, by going after another aspect of regal injustice in his new book, Mariana knew very well that he soon would be on dangerous ground with the authorities. But he forged ahead with his monetary project anyway, remarking at the time that “it is in the most brutal and scabrous issues that one must exercise the pen.”

In the new book, Mariana explained in simple terms the truth about monetary debasement, or what is today called “money printing.” In those days, debasement consisted of removing coins’ precious metal content for its use by the king and his government. Mariana had seen how this policy had impoverished the citizenry and hurt commerce, creating widespread discontent.

Watching the fiscal chaos unfold, he likened the policy to outright theft: “Look,” he explained, “would it be allowed for a prince to break into his subjects’ granaries, take half of the grain stored there for himself, and by way of compensation allow the owners to sell the remainder at the same price as the original whole? I do not think that there would be anyone so preposterous as to condone such an act.”

In words that could be directed at today’s Federal Reserve, he added that creating money was “like giving drink to a sick man at the wrong time, which at first refreshes him, but in the end only makes his condition worse and increases his suffering.”

In 1609, this type of diatribe was radical—treasonous, even—regardless of whether it was economically sound.

The 73-year-old professor was summarily detained and held in custody in Madrid as well as Rome, where Pope Paul V banned his book. Writing about the causes and consequences of the nation’s economic crisis had been, in the end, a more menacing threat to the establishment than Mariana’s earlier justifications of the overthrow and killing of tyrannical monarchs.

In Madrid, Mariana was jailed and left to prepare for an apparently hopeless trial in which he would have to mount a defense against the charge of lèse-majesté, or treason —a defense the professor elected to undertake on his own.

Having been abandoned by weak-kneed friends and his own Jesuit order, Mariana nevertheless refused to back down and, on November 3, he responded in writing to the charges, reaffirming his belief that the king had no right to debase the currency without the consent of the people, and that inflation was akin to an illegitimate tax—all while adamantly defending his freedom of speech.

When the oral arguments finally took place in December,1609, the professor’s witnesses were reluctant to come to the stand (one didn’t even show up), while his more numerous accusers fiercely denounced him—many of them even claiming that the king could do whatever he wished with the money supply, as well as the property of the people.

Finally, on the day after Christmas, the Day of the Three Kings in 1610, the government rested its case, while the Jesuit professor concluded his by defiantly stating that he only answered to God-given, natural laws—not those of the kingdom, especially when they contradicted God’s laws. On that note, the case was promptly set for sentencing several days later.

A miracle of sorts

What happened next was a Christmas miracle of sorts. At the last moment, the pope weighed in on the case, refusing to consent to the septuagenarian’s punishment.

Given the still-powerful influence of the Catholic Church in early 17th century Spain, the king’s government was left with little choice: It ended the trial without a sentence, and Mariana, now 74, was free to return home to Toledo.

This, of course, did not stop the Spanish king from destroying every copy of Mariana’s book that his minions could find—a project that would be completed by the Inquisition in the days after Mariana’s death in 1624. Without question, the professor had learned one of the most bitter lessons of his life: When confronting political authority in defense of individual liberty, one should anticipate the very real possibility that one will be abandoned by many friends and associates—as indeed Mariana was left undefended by the Jesuits.

And yet, between Mariana’s day and 1776, the classical liberalism he had helped formulate was augmented by John Locke and others, and adopted by America’s revolutionaries, resulting in the first nation ever to proclaim that all men are created equal, that sovereignty resides in the people and that government power ought to be limited.

Mariana, in short, had made his mark, and in so doing had changed the course of history. And his story can inspire and reinvigorate the efforts of all who seek freedom and genuine liberalism in the world today.