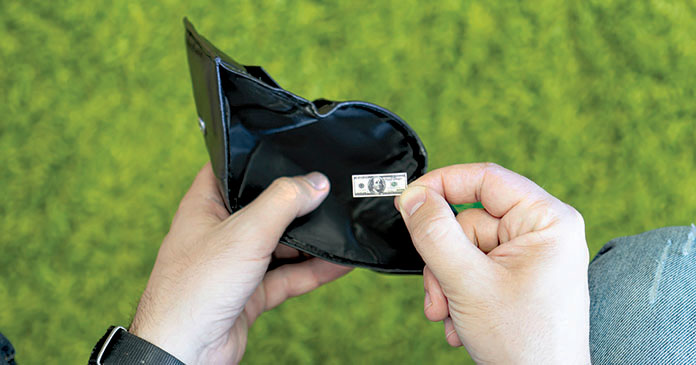 Rents just hit another all-time high—and that means Americans are spending even more of their paychecks on housing.

According to Realtor.com, the U.S. median rental price hit a new high of $1,792 in February. Soaring 17.1 percent y/y, February represented the seventh consecutive month of double-digit percentage increases. For Americans earning the national median income of $67,521 a year, that average rent works out to about 32 percent of their pre-tax pay. That’s above what financial experts recommend budgeting for housing.

“February data indicates that rents are increasingly straining Americans’ budgets,” Danielle Hale, Realtor.com chief economist said. “Whether it’s rent or mortgage payments, the general rule of thumb is to keep monthly housing costs to less than 30 percent of your income.”

February’s y/y rent growth was four times higher than March 2020—the onset of the pandemic. The increase is rooted in a growing imbalance between supply and demand as there simply are not enough apartments available to satisfy all those who want to rent. That means landlords are able to up the price and still find renters. As rental demand is likely to continue outpacing supply, affordability will remain a challenge throughout 2022.

“With rents surging nationwide, February data indicates that many renters’ budgets may be stretched beyond the affordability limit,” Hale said.

Rental prices have increased by nearly 20 percent over the past two years, but household wealth has seen very little growth.

In 2020, the most recent year on record for U.S. Census data, median household income declined $2,039 from the 2019 median of $69,560. The downturn is attributed to the COVID-19 pandemic, which took a toll on the economy and led to high unemployment rates. Although the U.S. is rebounding, Americans are still reeling from the pandemic’s economic fallout.

According to a Pew Research Center survey, among those who say their financial situation has gotten worse during the pandemic, 44 percent think it will take them three years or more to get back to where they were in 2020. This includes about one-in-ten who don’t think their finances will ever recover.

“The economic fallout from COVID continues to hit some segments of the population harder than others,” Researchers wrote, adding that lower-income adults are among the most likely to say they or someone in their household has lost a job or taken a pay cut since the outbreak began in February 2020.

Low-income Americans make up a notable share of the nation’s rental demographic, according to the National Low Income Housing Coalition. The organization says of the 44 million renter households in the U.S., 10.8 million have extremely low incomes at or below the poverty level. For this segment rental price growth is contributing to housing insecurity.

According to Pew’s survey, 34 percent of  lower-income adults now say they worry almost every day about paying their rent or mortgage. In relation to the entire U.S. population, researchers say that about one-in-five adults often worry about housing affordability.

“These concerns are felt more acutely by lower-income adults, as well as by those in households that have experienced job loss or pay cuts during the pandemic,” Pew researchers wrote.

And experts say this is not the peak of housing costs. As rental prices are projected to rise further this year, housing affordability will certainly be a concern for Americans growing tired of the financial burden.