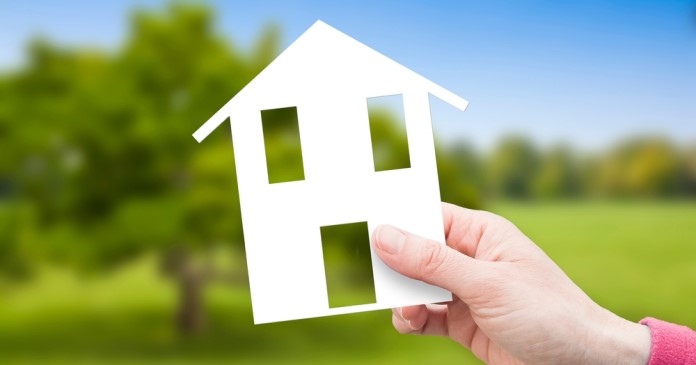 The Census Bureau periodically updates its seasonal adjustment factors. In this month’s residential construction spending report, the seasonally adjusted data was revised back to January 2015. However, changes to the previous month’s data due to updates to the measurements are not reported separately from changes due to revisions in the seasonal adjustment factors. Therefore, changes to the values reported for earlier months will not be discussed in this report since their cause is unknown.

The reported value of total private residential construction put in place in May 2022 was $938.2 billion on a seasonally adjusted, annualized basis. This figure, which includes spending on both new construction and on improvements, was reported to be up $2.3 billion from April’s revised figure.

The value of new private construction of multifamily residential buildings put in place in May was reported to be $100.3 billion on a seasonally adjusted, annualized basis. This was reported to be down $28 million (0.03 percent) from the revised level for April. The value of multifamily construction spending in May 2022 was 3.6 percent lower than the level of May 2021.

State and local governments were reported to have put $9.1 billion in residential construction in place in May on a seasonally adjusted annualized basis.

The value of new single-family residential construction put in place in May was $483.1 billion on a seasonally adjusted, annualized basis. This was up fractionally from the revised level for April and was up 15.1 percent from the level of May 2021. 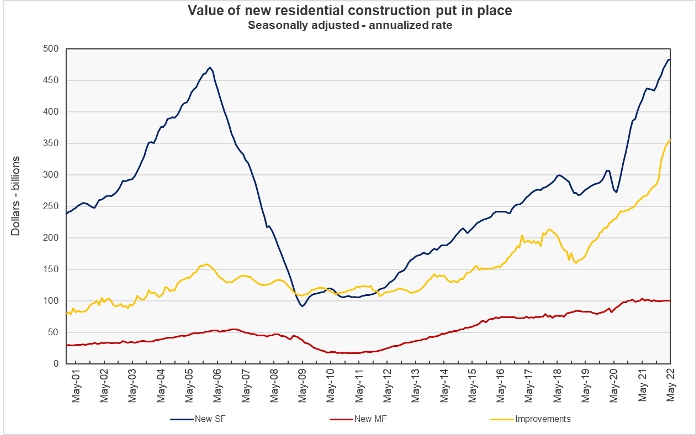 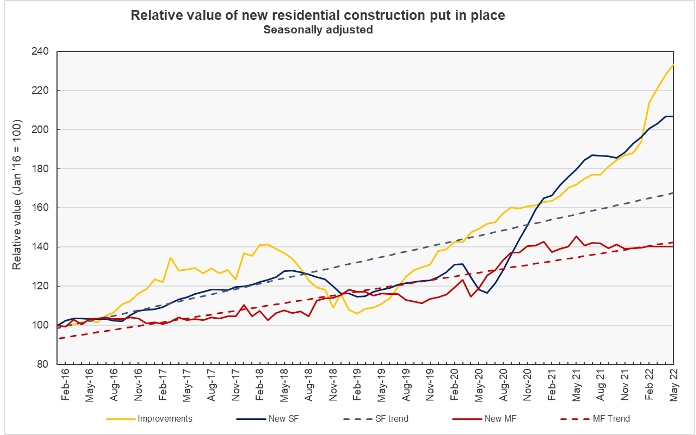 For multifamily residential spending, the rate of growth since 2012 has not been as constant as for single-family. Therefore, the trend line shown in the graph is for the period illustrated in the chart. It shows that value of multifamily residential construction put in place has now fallen below the recent trend after exceeding it for much of the pandemic period.