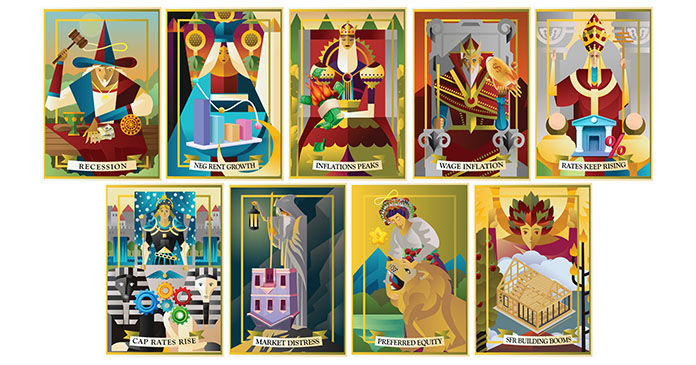 Next year will bring a moderate economic recession by October, negative annual rent growth of 1 to 5 percent, and increasing levels of real estate investor/manager distress predicts fund manager Origin Investments, specializing in multifamily real estate funds. Despite these headwinds, the firm says the overall strength of multifamily real estate market fundamentals will result in a return to rent growth in 2024. Origin looks to preferred equity positions and build-for-rent developments as the leading real estate investment opportunities in 2023.

“Current conditions are causing some investors to retreat to the sidelines until there is greater direction and clarity for the economy and the sector,” said David Scherer, co-CEO of Origin, who compiles the firm’s predictions. “But when you look at the basic fundamentals—demand and the long-term prospects for increasing rents and asset values—there is no better sector today than multifamily real estate.”

“It won’t be as deep as the Great Recession or as brief as what we saw in the pandemic-influenced recession of 2020. But it will be a serious downturn without a soft landing,” Scherer said.

Multifamily rents will enter negative growth territory. Rental rate growth will range from negative 1 percent to negative 5 percent in 2023, depending on the market. This is another indicator of an impending recession and is in sharp contrast to years of unprecedented growth well above the historic 2 to 3 percent annual growth rate norm. Negative rent growth will occur in part because current affordability ratios are not sustainable.

A healthy ratio means renters are paying about 25 percent of income toward rent. Today, the ratio in many markets ranges from 30 to 38 percent. Also, forecast deliveries of new apartment units in 2023 will put further downward pressure on rents. Although negative rent growth will be unpleasant for investors, Origin characterizes 2023 as an anomaly.

Rent growth will return to largely positive territory beginning in 2024 and remain positive through at least 2026.

“When rent growth ranges from 10 to 20 percent for two years in a row, it is reasonable to believe that a flat or negative year will bring you back into balance and a level that will be healthier over time,” Scherer said.

Inflation has peaked and will decline to around 4.5 percent. According to November CPI figures, inflation was 7.1 percent, the smallest year-over-year gain since last December. Some of the more predictive measures of inflation—commodity pricing, supply chain pressure indices and shipping container backlogs—have moderated, in part the result of four consecutive 75 basis point increases since mid-June 2022.

This provides credence to the axiom, “Don’t fight the Fed.” Yet there is still a long way to go to get to the Fed’s target rate of 2 percent, and it is not likely that inflation will fall as quickly as it rose. Origin expects that by the end of 2023 inflation will be at or about 4.5 percent.

Wage inflation will persist. Wage inflation, which continues to be out of sync and poses a threat to getting inflation in check, persists because of the significant shortage for blue-collar and service-industry jobs. The layoffs occurring in the financial and technology sectors are dwarfed by the shortage in service-sector jobs, like hotels, restaurants and retail.

The shortage means that companies are paying more and increasing costs to attract a quality workforce. While this is good from a societal perspective, it will maintain upward pressure on and impact inflation for longer than most people think.

Interest rates will keep rising. The Federal Reserve is targeting an inflation rate of 2 percent and has made it clear that continued short-term interest rate increases will occur in the fight against inflation.

Origin would not be surprised to see short-term interest rates continue to climb, albeit at a slower trajectory, to a range of 5 to 5.25 percent, which translates to 30-year mortgage rates above 8 percent. Recently released data indicating inflation may be stabilizing is positive news and likely will portend to a lower trajectory of interest rate increases—25 to 50 bps versus 75 bps.

Distress is coming to the market. Origin predicts a greater level of financial distress among investors and owners in 2023 due to acquisition, development and/or redevelopment strategies that were inextricably linked to variable rate debt.

In today’s environment there is little or no opportunity to refinance and/or recapitalize an asset. Another likely cause of distress will include investors who overpaid for assets—double-digit percentages above replacement costs—based on a strategy to upgrade and improve an older property and be able to achieve significantly higher rents.

Opportunities for investors will emerge in preferred equity. The greatest opportunities, at least through mid-2023 and probably longer, will be in the preferred equity position of the capital stack. Lenders have retrenched and are borrowing less and/or charging more.

Investment funds will deploy capital at a preferred position within the capital structure. The returns, potentially as high as 15 percent, are well-protected. Additional opportunities, in late 2023 and into 2024, will include the ability to acquire existing assets at prices below replacement costs—part of a natural reset that will occur.

The build-for-rent segment will boom. 2022 saw a dramatic increase in the number of build-for-rent projects being developed across the country. The slowed development trajectory, due to the current interest rate climate, will be short-lived, allowing developers and investors to move forward with projects that have tremendous appeal for renters who fall into different categories: would-be homeowners priced out of the market by increasing home prices and interest rates, and people who have grown tired of having neighbors living on all sides.

Multifamily housing fundamentals will gain momentum in 2024. Fundamentally, the multifamily sector is sound and despite headwinds in 2023. It is a favorable long-term investment. Conservative estimates suggest that the U.S. faces a housing shortage of around 4 million units.

The significant decline in multifamily construction starts during the second half of 2022, and projected into 2023, will only exacerbate that situation.

Ultimately, rents in 2024 and 2025 will move higher, as Origin’s Multilytics is predicting. This will pave the way for a situation where development and construction activity increases and values are pushed higher.