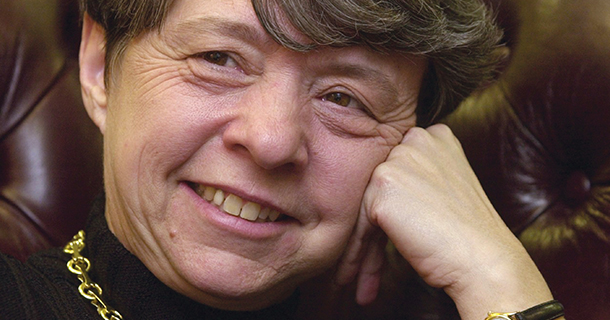 If confirmed, she will enforce complicated regulations written in response to the worst financial crisis since the Depression.

“You don’t want to mess with Mary Jo,” the president said at the White House with White at his side. “As one former SEC chairman said, Mary Jo does not intimidate easily, and that’s important because she’s got a big job ahead of her.”

Obama also re-nominated Richard Cordray as head of the Consumer Financial Protection Bureau, created after the financial meltdown. The president used a recess appointment last year to circumvent Congress and install Cordray. That appointment expires at the end of this year.

White, 65, was the first woman ever to be named U.S. attorney in Manhattan, one of the most prestigious jobs in law enforcement.

Colleagues and politicians describe her as tough, no-nonsense and fiercely competitive. And she brings a wealth of legal bona fides to an agency that, critics say, failed to act aggressively to charge top individuals at the nation’s largest banks who may have contributed to the financial crisis.

Under Schapiro, the SEC brought civil charges with record penalties against Goldman Sachs, JPMorgan Chase and Citigroup, among others. But those settlements left top executives at the banks free from blame.

James Cox, a Duke University law professor and expert on the SEC, predicted White will push the SEC away from “being just a tollkeeper” that collects settlements and make it a forceful agency that brings meaningful sanctions against senior individuals.

“She has a high sense of the public purpose of the law,” Cox said. “You’ve got to change the culture of the SEC to the point where you’re willing to say, ‘We’re going to go after the individual.'”

In 2000, White led the prosecution of more than 100 people-including members of all five New York Mafia families-accused of strong-arming brokers and manipulating prices of penny stocks. The action was one of the biggest crackdowns on securities fraud in U.S. history at the time.

White’s office also won a record $606 million in restitution from the securities arm of the Republic New York Corp. bank in 2001. The bank pleaded guilty to conspiring with an investment adviser to hide hundreds of millions of dollars in losses from Japanese investors.

She heads the litigation department at the law firm Debevoise & Plimpton.

White said that if she is confirmed, she will work to “fulfill the agency’s mission to protect investors and to ensure the strength, efficiency and the transparency of our capital markets.”

“The SEC, long a vital and positive force for the markets, has a lot of hard and important work ahead of it,” she said.

Sen. Charles Schumer, D-N.Y., a senior member of the Senate Banking Committee, called White “a fearless, tough-as-nails prosecutor with the knowledge of industry to keep up with the markets’ swift innovation.” He said she will easily win Senate confirmation.

White graduated first in her law school class at Columbia University in 1974. Much of her early career was spent as an assistant U.S. attorney, first in the Southern District, which includes Manhattan, and later in the Eastern District, home to Brooklyn and in the 1990s a hotbed of organized crime.

She led the prosecution of Gotti, who was convicted in 1992 of murder, racketeering and other offenses. He died in prison in 2002.

In 1993, shortly after the bombing of the World Trade Center, President Bill Clinton appointed her U.S. attorney.

When Ramzi Yousef, the mastermind of the bombing, was captured in Pakistan, a U.S. military plane was sent there to bring him to the U.S. She demanded the plane land within the Southern District so that she could prosecute him in Manhattan. Under the law, a defendant extradited to the U.S. must be tried in the first jurisdiction in which the plane sets down.

Beyond pursuing cases related to the financial meltdown, the SEC is deeply involved in writing new rules.

It must come up with the final wording of the so-called Volcker Rule, which regulators hope will limit the kind of risky trading by banks that contributed to the financial crisis and forced taxpayers to bail out the institutions.