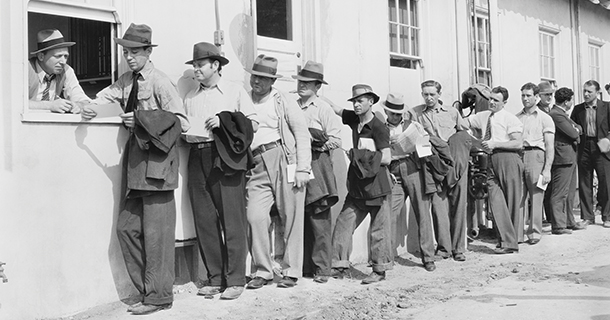 Hiring has picked up, but not for the longterm unemployed, those out of work for more than more than 26 weeks. We’ll get a new look at the data when July jobs numbers are released in August.

The revelation last year that many job requirements for open positions mandated that candidates already be employed seemed a bit like a joke, but the evidence that employers screened out unemployed applicants was so widespread that the Equal Employment Opportunities Commission began investigating it.

A couple of interesting studies examined the extent of discrimination against the unemployed. These studies are unusual in that they involved real efforts to find real jobs. One created 3,000 pretend candidates and sent their resumes to a random sample of job openings. They varied one item among otherwise identical applications: whether the individual was currently unemployed and, if so, how long they had been unemployed.

Only about 4.5 percent got callbacks, which suggests that the typical unemployed applicant has to apply to a little more than 20 jobs to just get a positive response from an employer indicating that they are still being considered for the job.

Surprisingly, the call-back rate was slightly higher for those who had just been laid off than for those who currently had a job. What happens after you are unemployed for more than a month? At that point, the probability of getting any positive response from employers falls sharply and declines further with each month, hitting a plateau after about eight months. A person with an otherwise identical set of skills and experiences is about half as likely to get a positive response from employers after eight months of unemployment as compared to a person just being laid off.

Another study is similar, with an important twist. They compared applicants on two dimensions: How long they were unemployed and whether they had relevant job experience. This study also found a sharp drop-off in employer interest for candidates with around six months of unemployment, but it also found that recently unemployed candidates with no relevant experience for the position were more likely to get employer interest than were those with relevant experience who were unemployed for six months or more.

What’s going on here? At least at present -and perhaps because of the depth of the recession-there doesn’t seem to be much stigma associated with being unemployed per se. But there is a really big reluctance to hire those who have been unemployed for a while. It’s so big that it trumps the concern about having the relevant skills, which news reports constantly suggest is the big challenge employers face.

Here’s the point: Hiring managers are only human. They don’t have much support in doing their jobs. If you think hiring decisions are based on careful evidence about what attributes make the best hires, think again. Few employers have the time or resources to do any studies of what predicts a good hire, let alone looking at the specific evidence concerning prior unemployment. There is no evidence that I have seen anywhere suggesting that the long-term unemployed make worse candidates.

Hiring managers are going with their gut feel or what they think are “sensible” ideas about what makes a good candidate when the resist hiring the long-term unemployed. We know that going with your gut in hiring decisions means going with all kinds of unstated and in many cases unconscious prejudices. That’s what kept women and minorities out of many jobs and now keeps older workers out of them as well. How about these sensible ideas? “If they were good, someone else would have hired them” -not when other employers think like you do and when there are so few jobs to go around. “Their skills are rusty”-one doesn’t forget how to do a job in six months, and all new hires require some time to learn how your operation works.

What we do know about job candidates who are long-term unemployed, which is related to job success, is that they are persistent. Millions of other unemployed facing this job market gave up looking and dropped out of the labor force. We also know that they will likely be very grateful to have a job, and gratitude is associated with many aspects of good job performance. They are also likely to be cheaper and easier to hire because you don’t have to woo them away from their current employer.

The way to get hiring of the long-term unemployed started is to recognize that there is no objective case in this economy for not considering a candidate who has been out of work for a while. Therefore, excluding them out of hand is a form of prejudice. The people at the top of organizations need to point out that excluding such candidates is likely costing us money because we are ignoring potential good hires, just as it costs us money to exclude women, minorities, older individuals, and anyone else who has the potential to do the job.

Author: Peter Cappelli, professor of management at the Wharton School.

Prepping for the oncoming rate hikes