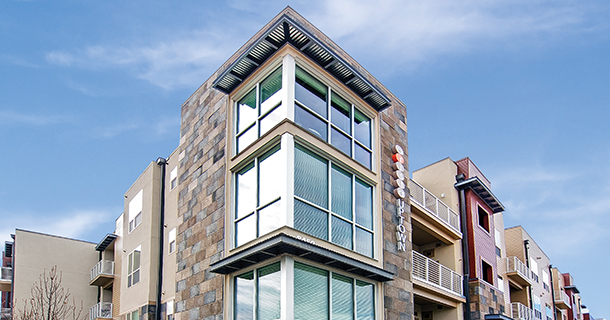 And a number of finalists in 22nd annual National Association of Home Builders (NAHB) Multifamily Pillars of the Industry competition have responded to the end of the romance with the automobile by building communities close to public transportation.

Randolph Tower City Apartments, a finalist in two Pillars categories this year-Best High Rise and Best Historic Restoration-is the epitome of TOD. The community offers no parking at all. Jonathan Holtzman, CEO of Village Green, the Michigan-based developer that converted the 45-story neo-Gothic tower from offices to apartments, doesn’t believe that is a problem for the community. “We find that every year, less and less renters have a car,” the head of the company that bought the then-crumbling tower out of bankruptcy in 2005 said a couple of years ago. There is public parking available in garages in the area, Holtzman said.

The lack of parking at the community apparently didn’t discourage renters. The building was more than 95 percent leased within 10 months of first occupancy, a lease-up that was faster than any other Village Green development in history and before construction was complete.

Designated a City of Chicago Landmark and listed on the State of Illinois and National Park Services Register of Historic Places, the skyscraper that was built in 1929 to house offices, retail and a private German social club, was closed in 2008 by Chicago officials due to hazardous conditions. It remained abandoned for two years until Village Green and the architects at Hartshorne Plunkard Architecture joined forces to transform it into a mixed-use residential community that includes 312 apartments in the heart of the Windy City’s theater district.

Community amenities include a fitness center with half-court basketball court where the former ballroom was located, and a completely refurbished indoor Olympic-size swimming pool with a waterfall, sauna, hot tub and locker rooms. Among other amenities are a business center with conference room, a private movie theater, gaming space and the elevated Sky Park outdoor lounge and the indoor Sky Club that features a lounge and gourmet kitchen.

The Can Plant Residences

The Can Plant Residences at Pearl Apartments in San Antonio, Texas, is another example of pedestrian-oriented adaptive reuse. A finalist in the category for the best non-garden apartment community of five stories or less, the 293-unit apartment community that is located on 22 acres in the city’s historic Pearl Brewery district is contributing to the revitalization effort in southern Midtown and northern Downtown.

The only urban lifestyle apartment community in the area, Can Plant is connected to an extension of San Antonio’s historic River Walk and within walking distance of the San Antonio Museum of Art.

The community where the residential buildings were designed by Houston-based WGW Architects and developed by San Antonio-based BSA Can Plant has become a catalyst for nearby urban redevelopment.

Can Plant’s creators spent considerable time and energy on collecting, researching and categorizing thousands of historical artifacts and architectural details for use in the new community that exemplifies urban contemporary design.

Can Plant consists of studios, one- and two-bedroom units that range from 550 sq. ft. studios to 1,360 sq. ft. two-bedroom apartments housed in four three- to five-story buildings that feature exterior finishes of brick, steel, stucco and metal panels.

The community that broke ground at the beginning of 2011 and was completed at the end of January 2013 was 86 percent leased and 74 percent occupied as of May 9 of this year, with lease-up ongoing.

Also designed with the young professional in mind, the 272-unit Arista Uptown Apartments is a transit-oriented community located on a 6.68-acre parcel in Broomfield, Colo., midway between Denver and Boulder.

Convenience and luxury are at the heart of the urban lifestyle Arista Uptown embodies, with walkable access to outdoor recreation, public transportation, multiple parks and the nearby 1st BANK Center, a popular 6,500-seat entertainment venue.

The community features eight three-story buildings with a percentage of the units in the low-700 sq. ft. range keeping the price point affordable for young people at the beginning of their careers.

The studio, one- and two-bedroom units, housed in an updated version of the typical three-story walk-up, range in size from 566 sq. ft. to 1,092 sq. ft. and include balconies and terraces and tuck-under garages. Apartment amenities and finishes include quartz countertops, an under-mount, singlebowl kitchen sink and a breakfast bar, built-in wine rack, wood-style flooring, walk-in closets, double vanities and contemporary square-style bathroom sinks and front-load washers and dryers.

Community amenities include a clubhouse and fitness center, a swimming pool and spa, barbecues and a 1.5-acre private lawn with an area where dogs can enjoy the outdoors off-leash.

Occupancy at the community was 74 percent as of May 20 and average absorption per month was 25 to 30 new rentals.

Situated at the western gateway to the city of Glendale between four of Los Angeles County’s largest employment centers, downtown Los Angeles, Hollywood, Pasadena and Burbank-the 186-unit Icis is an urban boutique resort-style community that caters to GenY and creative professionals.

A finalist in the category for best mid-rise apartments, the community that was designed by TCA Architects and developed by Alliance Residential, targets residents who seek the intensity of city life, but also value the peace of a more intimate neighborhood at the foot of the Hollywood Hills.

Started in May 2007, construction of the project that was put on hold during the Great Recession was completed just last March. As of mid-May, the community was 40 percent occupied.

The vibrant mixed-use project has created a pedestrian-oriented street presence and is a key element of Glendale’s effort to revitalize a tired neighborhood that had fallen into a malaise of closed or under-performing retail and industrial uses.

Community amenities at Icis include a zero-edge pool with a soaking spa, a fireside entertaining and dining terrace and poolside cabanas with hammocks and the Garden of Icis-a serene sanctuary with outdoor fireplace seating in a lushly landscaped alcove. The community’s three rooftop decks include the Champagne Deck with a social bar, hanging chairs and multimedia capability, the SunKissed Suite that features daybed loungers for basking in the sun and the Woof Deck, a pet-friendly terrace with a dog-washing station. A dog run is located along the perimeter of the property.

The studio, one- and two-bedroom apartments, some of which include lofts, average 853 sq. ft. and include stainless steel appliances, wood-plank flooring, granite countertops, walk-in closets and washers and dryers. Many units also are equipped with wine fridges, fireplaces, wireless surround-sound music systems, smartphone-controlled thermostats and custom lighting.

Another community designed to attract young professionals, the 326-unit SteelHouse in Orlando, Fla., is a transit-oriented development built on a redeveloped brownfield. The pedestrian-friendly, four-story community that was designed by Poole & Poole Architecture and developed by Pollack Shores Real Estate Group includes bike storage areas and a half-acre easement for a future segment of the Urban Trail path that winds through downtown.

The community that broke ground at the beginning of December 2011 and was completed at the end of April this year strives for a balance between luxury and convenience. Located within walking distance of restaurants, nightlife, entertainment and shopping in a gateway location at the northern end of downtown Orlando and close to the Lynx Central Station for the city’s bus line, SteelHouse is a key element in Orlando’s downtown revitalize effort, prompting Mayor Buddy Dyer to call it “a huge victory” for the city.

The posh community amenities include a salt-water pool with deck, an outdoor fire pit with grill areas, an eclectic art gallery, a garden courtyard with fountain, a singlestream recycling program, bike stations and the top-floor Steel Lounge that offers views of the city.

Finishes in the one- and two-bedroom apartments that range from 683 sq. ft. to 1,223 sq. ft. include faux hardwood flooring, ceiling fans, 42″ cabinetry featuring white high-gloss or Wenge finishes with tangerine and zebra wood in the kitchens that also include an under-mount stainless sink with integral sprayer, ceramic tile backsplash and stainless steel appliances. Bathrooms boast framed mirrors and Wenge vanity, garden-style tubs and separate showers.

The community was 66 percent leased and 46 percent occupied as of May 2013, with stabilization expected by mid-September.

With Washington, D.C.’s largest Harris Teeter grocery store on the ground level of their apartment community, residents of the transit-oriented 13-story, 440-unit Flats 130 at Constitution Square, enjoy the height of shopping convenience. And numerous restaurants and shopping and nightlife opportunities are within easy walking distance of the community that is a finalist in the category for best high-rise of nine stories or more.

Designed by SK&I Architectural Design Group of Bethesda, Md., and developed by Stonebridge Carras, Flats 130 is located on a 7.8-acre site in D.C.’s NoMa submarket right next door to the recently completed Red Line Metro at the NoMa-Gallaudet U station and close to bus lines and bike trails.

The mixed-use community that broke ground in April 2007 and was completed in May 2012 was 94 percent occupied as of May 25.

A system of courtyards and terraces with outdoor fireplaces, water features, a pet park and outdoor kitchens offer residents a variety of opportunities to extend living to the outdoors.

Amenities also include full-size washers and dryers, walk-in closets and, in select units, hardwood flooring, built-in shelving, linen closets and private patios and balconies. The top-of-the-line Signature Flats in the community come with additional high-end features like hardwood flooring throughout the kitchen, living and dining areas, rain shower faucets in the bathrooms and a private rooftop terrace.

Also located in the nation’s capital on a site that is just a bit less than a mile west of Flats 130, the 390-unit Meridian at Mount Vernon Triangle also is helping to revitalize the transitioning neighborhood and has sparked a renaissance in the once-decrepit part of town. Completed just a couple of months after Flats 130, Meridian also is a finalist in the best high rise category.

Timing of the opening of 14-story, 390-unit, amenity-rich community that was designed by Hartman Design Group to appeal to young professional urban dwellers was critical to its success. Developer Paradigm Companies scheduled the opening of the building to occur post-recession and prior to the beginning of 2012 in order to capitalize on the dearth of high rise communities in the area at the time.

That timing resulted in rapid lease-up of the community, which was 97 percent occupied as of May 2013.

Located in the heart of the revitalized DC neighborhood of Mount Vernon Triangle, the community is within easy walking distance of numerous dining and retail establishments. Also within walking distance are the Mt. Vernon Square, Gallery Place and Judiciary Square Metro Stations.

The 320-unit Domain at Eldridge is crowded to the street, creating an urban, in-town ambiance. The three-story, wood-framed community that is located on a 10-acre site in Houston’s Energy Corridor enjoys convenient access to major employment centers in the Energy Corridor and Westchase District. Companies like ConocoPhillips, Shell Oil, Citgo and British Petroleum and high-tech employers like Sysco and BMC Software provide employment opportunitiesfor the young professional residents of the apartment community that is a finalist in the category for best garden apartment community of four stories or less.

Designed by Steinberg Design Collaborative and developed by City Street Residential Partners, the community that broke ground in April 2011 and was completed in December 2012 was 95 percent occupied as of mid-May 2013.

“This community has now created a new product type for the multifamily developer looking to achieve a higher density in a suburban location with garden-type construction cost. Thus ‘The Gardensity’ community is born,” explained the architect in the Pillars entry form.

Domain at Eldridge targets not only the Millennial generation, but also Boomers and Empty Nesters.