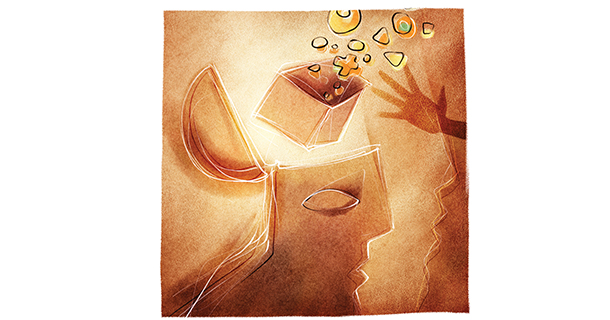 Mindfulness is already known to be a rich concept. In psychology it means being aware of one’s thoughts and feelings, and non-judgmentally accepting them. While mindfulness is a learned behavior, it can also be an enduring feature of one’s personality, i.e., a trait.

New research out of the University of Toronto suggests that higher levels of the trait, mindfulness, provides some protection against potentially dangerous emotional highs by attenuating reaction to positive feedback. For those high in mindfulness, it’s just not as thrilling when the world gives you a high-five.

Researchers, Rimma Teper and Michael Inzlicht, used EEG to record how participants’ brains responded to rewarding, aversive, and neutral feedback. They also measured mindfulness, levels of both awareness and acceptance. Their findings suggest “that individuals who report a high level of non-judgmental acceptance of thoughts and emotions display less neuroaffective reactivity to immediate rewards.”

In other words, mindfully accepting one’s thoughts and feelings can protect against getting drunk with success.

Good managers and savvy investors already know this. They know they have to attenuate the high that can come from successful performance because the high hides risk. As much as a feeling of invincibility says otherwise, yesterday’s success does not lower tomorrow’s risk. The odds of success are what the odds are, whether you’re flipping coins, real estate, or companies.

But it’s not easy to keep this in mind.

Byron Woollen is principal at Podia Consulting, a NYC-based consulting firm offering leadership and organizational expertise to CEOs. His article, “Investment risk and the mind of the financial leader,” documents how an organization can succeed or fail at integrating risk management so as to avoid the illusion that previous success protects against future risk.

Example: The CEO of the successful company did many things right, including articulating basic principles while propagating them throughout the organization. The first of his principles: “An investor who does not monitor his own potential for greed and for the ability of money to generate other psychological distortions is unlikely to appropriately attend to the inherent risks of his investment.”

As Woollen describes, this CEO was serious about his principles. He would not let his financial analysts finalize an investment decision until they understood that greed distorted even seemingly objective judgements. Smart call on his part.

Which brings us back to mindfulness.

Mindfulness is already linked to so many different dimensions of psychological and even physical health.

Like I say to patients in my clinical practice, “all mindfulness is good mindfulness.” There are lots of reasons for developing ways that increase and support mindfulness. This is just one more. And while it is still preliminary, the idea that increasing mindfulness (especially “nonjudgmental acceptance of thoughts and emotions”) might protect against bad decisions is worth attention.

Lots of practices increase both awareness and acceptance of thoughts and feelings. Mindful meditations and focused psychotherapies all put mindfulness front and center. But there are other practices in which mindfulness grows as a matter of course. I’m thinking of yoga and other practices like Pilates and dance, and even activities like hiking and cycling.

Not only is all mindfulness good mindfulness, all roads to mindfulness are good roads. Find one (or more) that work for you.

And remember, being drunk with success is no way to drive a business.

When decision-makers are flushed with success from the last choice, the next choice becomes more dangerous. Developing mindfulness may help. And if it doesn’t, even if this new research does not pan out, you’ve still improved your life and health, still accrued additional mental wealth.