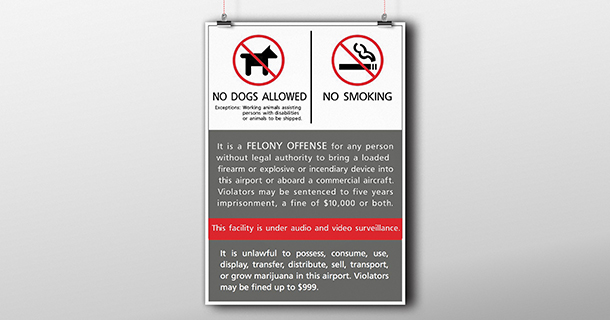 “There were a number of discussions among executives and suppliers around whether legal substances should be available at non-sanctioned events,” he said.

Certainly this was all to the chagrin of executives at the National Apartment Association (NAA), as they would prefer convention excitement be based on learning and networking opportunities.

Tongue-and-cheek quipping, and the possibility of controversial and unsanctioned, albeit legal, events during the show give the event somewhat of an unseemly haze.

In an effort to provide guidance to attendees regarding this topic and its newly-minted, uncharted territory, MHP reached out for comment. Becky Sullivan, NAA vice president of communications and marketing said, “It is not our policy to take a public stance on a law the voters passed in Colorado that has no bearing on our meeting. We do not issue guidelines for behavior for conference attendees. That is up to individual employers.”

While it might be expected that NAA remain neutral on legislation not directly pertinent to the industry, NAA’s annual event, passage of said law after the stake was in the ground on the venue, and a number of potential corporate risks related to the behavior of personnel in conference mode begs some level of contemplation.

So as management executives and their organizational regattas make plans to arrive in Denver for the 2014 NAA Education Conference & Exposition, we took a quick survey of attitude and thought.

“The new law has absolutely no effect on employers who can legally apply any limits regarding marijuana consumption that they like, including zero tolerance,” states Rich Grant, director of communications for the city’s visitors and convention bureau. “If there is a violation of employee activity, for example zero tolerance, the instance should be handled under their corporate policy. This is a new law, therefore there is a lot of fear around the topic, which will, over time mitigate itself.”

Pat Hutchison president of Denver, Colo.-based Mission Rock Residential, managing 15,000 apartments adds perspective: “I think this is much to do about nothing. I walk down the streets of Denver and I’m not accosted or surrounded by pot smokers.”

Colorado’s new law legalizing the use of marajuana is having no effect on Denver which continues to be a solid choice for convention bookings, Grant said, “There has been no change in our scheduled conventions due to the enactment of this law.”

Since its last successful show in Denver, Sullivan reiterated, “We are on track for another successful conference in June. The new law has had no measurable effect on attendance.”

When asked how Denver was selected Sullivan said, “We booked our 2014 conference in Denver in 2009. The legalization of marijuana was not an issue for us at that time, nor is it now.”

The intersection of new law, employment policies, and corporate liability to those sending staff, or even concern for public health, does give legal pause. It’s a quandary with which law enforcement itself has yet to fully reconcile. Quantifying potential risk to employers and attendees is new territory. There is little guidance for employers, and minimal conversation being taken publicly on the matter.

Visit Denver’s spokesman, Grant, says, “The media has been calling with interest on the tourism factor, not from the commercial perspective. Due to the nature of the law, prohibiting public consumption, the chance of exposure will be limited; 99 percent of hotels do not allow consumption, there are no dispensaries near the convention center. It’s definitely not obvious.”

Grant says that the average trade show attendee will not be exposed to the behavior as it is not allowed near the convention center district.

Chad Scott, ePremium Insurance based in Mason, Ohio, and veteran conference attendee of fourteen years says such activity is nothing new. “It’s likely that there have been attendees at most previous NAA events in locations such as San Diego, Boston, Vegas, etc. who have used marijuana while attending. The only difference for the upcoming conference in Denver is that it will be legal–and there will certainly be more partakers.” He adds, “regardless of geographical location, we can encounter situations that require judgment and action. Those who choose not to be around it will most likely do what they have always done, remove themselves from the situation.”

Attorney Julie Heath of Dallas-based Farrow-Gillespie & Heath LLP, specializes in employment law and employer relations. Whether choosing to use the drug or not while attending the conference, either positions is legal and appropriate she says, commensurate to the particular company’s stance. “Addressing the new Colorado law from a human resources perspective involves applying the same sort of reasonableness analysis as any other employer policy. You start with the premise that everything that is legal is not necessarily beneficial, particularly in an employment setting. If an employer believes that an employee’s off-duty, legal use of marijuana may negatively impact the company in any way–from public perception of the employer to decreasing the quality of the employee’s work performance–an employer is free to regulate the conduct.”

Hutchison’s local view looks ahead, “Some companies may remind their employees that while it is legal in Denver, it is still against their company policy. I think companies will likely only react if there is a situation that they are made aware of that puts the reputation or safety of their employees in jeopardy.”

Victoria Cowart, VP of management at Darby Development in Charleston, S.C. and NAA board member says, “I think it is incumbent upon each of us to determine where our companies are with this topic before going to this convention.”

Scott adds, “We plan to make our attending team aware of the rules and regulations around the new consumption laws in Colorado. We’ll also discuss the impact that public consumption poses from a PR standpoint when interacting in group settings.”

Heath cautions, “Some employers might be tempted to avoid addressing the topic altogether hoping that things will not get out of hand at the conference. But this sort of approach would leave the employer in the position of having to determine on the fly what is ‘reasonable’ marijuana use and what is reasonable in the eyes of one manager might not be reasonable in the eyes of another”

Heath adds, “For that reason, I think an employer is safer prohibiting the use completely and communicating that policy to the workforce prior to the conference. If the employer then applies the no-tolerance policy uniformly, there should be no opportunity for an employee to allege that he or she has been retaliated against.”

Still, some attendees may choose to put themselves, as well as their employers in an awkward position. Victoria Cowart, VP of management at Darby Development in Charleston, S.C. and NAA Board Member, says, “We will not be testing our employees upon return from Denver, unless there is an accident.”

“Our company does not conduct random drug testing and only as part of the new-hire package. The only time we drug test is if an employee is involved in an accident while on company duties, or if a personnel action deems it necessary to do so.”

The executive team at Mission Rock Residential holds firm, “Our position on marijuana use is that, although it may be legal in the state of Colorado, it is still illegal to smoke marijuana under federal law.” Says Hutchison, “In addition, we believe it is a safety issue. Our decision for now is to not allow marijuana use among employees.”

For those employers placed in the precarious position, Heath shares, “An employer may need to act immediately to protect the employee and others, and it may choose to follow up with discipline when the employee returns to work.” Keeping a level head is important she explains, “This problem most often arises when the comparative conduct occurs at different times and in different settings. For that reason an employer should have a predetermined plan of action for handling inappropriate social conduct. It may be advisable to adopt a formal policy governing after-hours or off-premises behavior. The bottom line is that, to avoid a later allegation of discrimination, an employer needs to take steps to ensure that similar instances of bad conduct are handled in the same manner.”

Heath adds, “Remember, too, that federal law continues to hold that marijuana usage is illegal which means that federal statutes such as the Americans with Disabilities Act will not require accommodations even for the medical use of marijuana. Unless and until federal law changes, employers in all states should feel comfortable continuing to enforce zero tolerance drug policies, including policies that forbid the use of marijuana under any circumstances.”