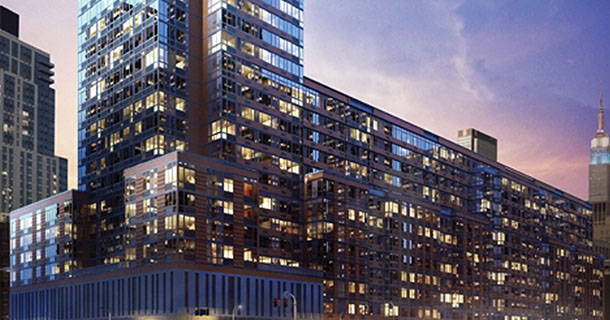 Today, the company is underway on 9,179 units in 31 apartment communities with a total capital cost of nearly $3 billion and expects to deliver more than 5,000 apartments this year.

“Our development efforts continue to be highly accretive to earnings as over the last four years we have raised almost $5 billion of capital at a weighted initial cost of under 4.5 percent,” they reported.

During AvalonBay’s Q1 2014 earnings call, Chairman and CEO Tim Naughton said the REIT is continuing to match-fund its development pipeline. “About 80 percent of all development and redevelopment underway is already capitalized with permanent capital, leaving just $600 million left to be funded.” he said.

“We’ve raised some capital in the first quarter. We raised about $300 million overall, when you take into account the unsecured term loan and an asset that was sold in Connecticut. We’ve got some assets that are under contract for sale in the second quarter here. So, as we step forward here and take on new commitments, with respect to development we’re implying to continue to match fund as we go along with long-term capital. Currently, our most attractive sources of external capital continue to be unsecured debt and asset sales,” said Kevin O’Shea, executive VP of capital markets.

Asked, during the company’s Q1 earnings call, why AvalonBay has decided to buck the trend of urbanization that has driven the downtown focus of most apartment REITs for a number of years, Naughton said, “We don’t think people exclusively want to live downtown. There’s still demand in the suburbs. You’re even starting to see employment and office space start to absorb reasonably well in some of the suburban markets,” said the CEO of the bi-coastal REIT.

He’s also seeing better value in the suburbs over the past 12 to 18 months from a development rights perspective, because capital has mostly been chasing the more urban opportunities. So, the recent push into suburbia has been an opportunistic play for AvalonBay, combined with the company’s intentional effort to be a bit diversified in terms of how the company penetrates its markets.

And, Matthew Birenbaum, AvalonBay’s  executive VP of corporate strategy, said the apartment communities AvalonBay has under construction today are probably concentrated a bit more in urban locations over the next year or so, as very large urban deals come online like the 710-unit, $276.1 million Avalon West Chelsea/AVA Highline, which includes 21,000 sq. ft. of retail and saw initial occupancy in Q4 2013 and is scheduled for completion in Q1 2015, and the 826-unit, $444.9 million Avalon Willoughby Square/AVA DoBro in Brooklyn that started in Q3 2013 and is scheduled for initial occupancy in Q3 2015 and completion in Q4 2016.

The suburban submarkets are much tougher to build in than the urban markets like downtown New York City and Boston, where constraints on apartment development are largely economic. People have considered those areas to be tough to penetrate because the economics just haven’t made sense, Naughton explained.

In the suburbs, it can take as long as five years to obtain entitlements and nimbyism is more rampant in those locations, where AvalonBay is looking to build on infill sites it mostly owns. “It’s an expensive way to play,” he said.

But, operating those suburban deals generally is less expensive than operating a high rise community, said Sean Breslin, executive VP of investments and asset management. “From a CapEx perspective, the high-rise assets do have components that drive up CapEx. You’ve got an interior corridor that’s typically heated and cooled, you’ve got paint and carpet in the hallways. You’ve got typically more expensive mechanical systems,” he said.

Comparing the company’s development rights pipeline to what’s currently under construction, the amount of garden communities is about the same. The big shift has been from high-rise to mid-rise, a combination of wood-frame wrap or wood-frame podium, located either in transit-oriented locations or locations that are in or near employment and retail centers.

“So, that’s really been the bigger shift from central core to kind of ex-urban infill-type sites where the economics are still dramatically different,” he said, referring to the comparative cost basis of Boston communities like the 398-unit AVA Stuart Street in Boston that cost $175.7 to build and the 187-unit Avalon Exeter that cost $123.2 million, to the $113.5 million cost to build the 445-unit Avalon/AVA Assembly in the Boston suburb of Sommerville, just three miles away.

“You’re talking 50 or 60 percent of basis in some cases, so that’s probably more the focus of the shift over the last 12 to 24 months, in reality,” he said.

“What we currently have under construction is about 25 percent garden and the balance is evenly split between mid- and high-rise—38 percent mid and 38 percent high. In our development rights pipeline—the future starts—the garden percentage doesn’t really change at about 25 percent. The high-rise drops from 38 percent to 15 percent and mid-rise is what moves to about 60 percent of the pipeline. The bulk of what we’re going to be starting is the wrap and podium deals in the infill suburban locations,” Birenbaum predicted.

The development team at Equity Residential continues to be extremely busy, with an elevated level of activity, thanks to the apartment REIT’s legacy land inventory and the Archstone land sites the company acquired in 2013.

During the first quarter of this year, the REIT completed construction on 1,290 apartments in five communities with a total development cost of approximately $368.3 million, expecting to achieve yields of six to seven percent on current market rents, inclusive of management costs, on those transactions.

Two of the properties are located in Seattle, Wash., and one each in Southern California, South Florida and Washington, D.C.

Also during first quarter, the company started 1.145 units in three new projects with a total development cost of $614 million, projecting yields of mid-four to mid-five percent on current market rents on those starts, Equity Residential CEO David Neithercut said May 1.

“So, with the starts in the first quarter, that leaves us today with nine land sites in inventory that we expect to develop soon, representing a pipeline of just over 2,500 units in terrific urban locations in our core markets, with a development cost of approximately $1.1 billion. And, of this current inventory, we expect to begin construction on several hundred million more yet this year, with the balance to begin in 2015,” he said.

Equity Residential currently is underway on 11 apartment communities with a total of 3,602 units located almost exclusively on the West Coast in Pasadena, San Francisco, Seattle, Los Angeles and San Jose, with estimated completion dates ranging from Q3 2014 to Q1 2018.

The only non-West Coast community underway is the 236-unit, $111 million, 20-story 170 Amsterdam in New York City on a site the Chicago-based apartment REIT purchased from American Continental Properties in 2011 for $76.5 million.

Camden Property Trust, which currently is underway on 14 apartment communities with a total of 4,243 units located in markets that span the country, added two downtown Houston parcels to the apartment REIT’s land holdings in Q1 2014.

“There’s a Renaissance going on in downtown Houston, where the city is incenting developers to build downtown and there’s really sort of an urbanization that’s been going on across the country for the last 10 years that has finally caught up in downtown Houston,” Camden CEO Ric Campo said May 7.

“The area in downtown Houston is just on fire and so we’re expecting probably $2.30 a square foot in rent,” he said, explaining why the projected development cost for the 320-unit Camden McGowen Station increased from the previous $40 million for a 251-unit community to an estimated total cost of $82 million with 320 apartments.

He said Camden has owned the land for 12 years and has been working with the city and the local tax increment reinvestment zone to develop the six-acre tract to its optimum potential.

“Part of the deal that we made on this is we’re building a 400-space parking garage underneath our building and there’s retail, owned by the TIRZ (tax increment reinvestment zone) on the corner,” he said. “South of the property, we have a three-acre city park that also fronts on our Camden Travis Street product. So, we think that this is going to be one of the most desirable locations in Houston.”

“We think our rents are going to be much higher than our original pro forma in the four- or five-story wood product. So, we’re really excited about getting that project started finally,” Campo said.

UDR, Inc., completed $295 million of coastal development during Q1 and CEO Tom Toomey said, during his introduction to the company’s Q1 2014 earnings call, he is excited about the $566 million of development projects the apartment REIT has completed over the past six months, as well as the $183 million of new development that is expected to come online during the year.

The projects completed in Q1 include three on the West Coast—the $69.5 million, 264-unit 13th & Market in San Diego, Calif.; the $144 million, 315-unit Channel @ Mission Bay in San Francisco, which is expected to yield well above the upper end of UDR’s targeted 150 to 200 basis point trended range; the $85 million, 320-unit Los Alisos in Mission Viejo, Calif., and one on the East Coast—the $86 million, 256-unit Domain College Park that is located across the street from the University of Maryland Business School in College Park, MD.

Projects underway include the $90 million, 332-unit DelRay Tower in Alexandria, VA, formerly known as The Calvert, which encompasses the complete redevelopment of the former 187 apartments, combined with the development of an additional 145 apartments and 10,000 sq. ft. of retail space that started in the third quarter of 2011 with completion expected in Q3 2014.

Looking ahead, he said, UDR also expects to announce two or three new starts in the second half of this year, ranging from a total of $100 million to $150 million.

The UDR/MetLife JV 1 still holds seven land parcels of which the REIT owns a four percent interest for a total investment of $6.6 million.

“These assets provide us the opportunity to participate with MetLife in the development of well-located land for a total cost basis of approximately $180 million,” Herzog said, and UDR Sr. VP of Asset Management Harry Alcock added that the first couple of sites could start as early as later this year, with another two or three that could start in 2015 and the remaining two further out.

UDR has a $1.4 billion portfolio of capital warehouse and non-core communities with plans to sell those over time for strategic reasons. The proceeds from those sales will be provide the REIT the capacity to fully fund the company’s development plan for the next few years, Herzog said.