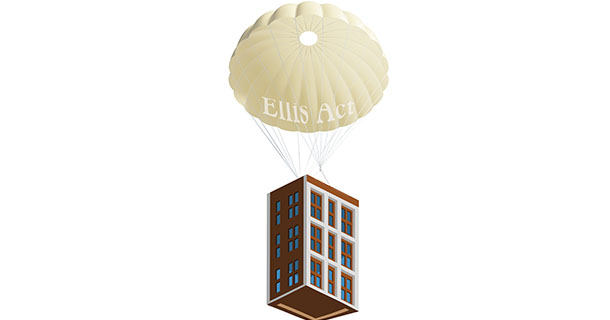 One person, Arie Shashou, 77, thought just that. That was before Shashou received an eviction notice in March. Shashou’s $825-a-month rent-controlled apartment, and 17 other units, will be demolished to make way for a pricey new apartment complex.

Such evictions have surged in Los Angeles as property owners cash in on the recovery. Rent-controlled units are being converted or simply flattened. In their place, developers are putting up new condos or apartment buildings, modern mansions or clusters of compact, single-family homes.

The evictions—allowed by the state’s Ellis Act—have exploded in San Francisco as well, accelerating a backlash against the city’s tech-driven gentrification. Two legislators there have moved to limit the practice; under current law, property owners are allowed to evict if they get out of the rental business or demolish their buildings.

In Los Angeles, owners filed to remove 378 rent-controlled units from the market last year, 40 percent more than in 2012, according to data from the L.A. Housing and Community Investment Department. That pace has accelerated this year.

“The people who make Los Angeles run—such as the hotel workers, the service workers, the teachers and the bus drivers and the regular working people—are being run out of Los Angeles,” said Larry Gross, executive director of the Coalition for Economic Survival.

Los Angeles passed rent control in 1979, after concerns that rapid rent increases were pricing many out of the city. There are roughly 638,000 such units left in Los Angeles—a dwindling supply because controls generally apply only to older buildings. And there’s little political momentum to expand rent control; the trend in California has been to scale back.

In 1995, the state Legislature barred units built after February 1 of that year from rent controls and ended strict regulations in some cities that prohibited rent increases if a unit was vacated.

The Los Angeles control rules limit annual rent increases for tenants in multifamily buildings built before October 1978. This fiscal year, the city allowed a 3 percent increase. Once a tenant moves, however, landlords can charge whatever someone will pay—but the cap on percentage increases still applies.

Tenants in rent-controlled buildings have heavy protections against eviction to ensure landlords can’t just kick them out to charge market rent.

One way out is under the Ellis Act.

To invoke the Ellis Act, property owners must either exit the business or demolish their buildings and put up new apartments. In L.A., landlords can set the initial rent for those new units, although the apartments would then be subject to rent control, according to the city housing department. Owners can dedicate a certain number of units as affordable housing to avoid rent control.

The debate over Ellis has raged recently. A state tenant organization marched on the state Capitol in February proclaiming a Renters’ Day of Action. Protests erupt in San Francisco to shame landlords.

In response, the California Apartment Association launched an Ellis-focused website to dispel what the site calls “myths and misconceptions.” Ellis is a safety valve for landlords, the association said. The group says landlords invoke Ellis for myriad reasons: frustration with rent control; to move themselves into a property; to avoid bankruptcy; or simply to retire.

“You cannot make somebody be a landlord,” said Beverly Kenworthy, executive director of the association’s Los Angeles branch. “If they want to get out of that business, this is the mechanism to do so.”

Enacted in the mid-1980s, the Ellis Act cemented the right of landlords to do just that. Many landlords who use the law today, however, are recent buyers of the property. Tenant groups and lawmakers have seized upon that fact to lobby for changes. Of the L.A. properties where owners filed to remove rent controlled units under Ellis in 2013, at least 51 percent had been purchased within the previous year, according to an analysis by real estate firm DataQuick.

“We are not talking about the Ma and Pa landlords,” Gross said.

If longtime landlords want out, tenant groups argue, they can sell to another landlord. Longtime owners, however, probably would fetch less in a sale if properties could not be converted to new single-family homes or condominiums for sale. And shutting the door on Ellis would put the brakes on redevelopment, said Michael Cohanzad of Wiseman Development, which used the Ellis Act to start evictions against Shashou and others.

Like many developers, Wiseman plans more new units than it will demolish. If the developer and others couldn’t use Ellis, redevelopment of parcels with older rent-controlled buildings would plummet, Cohanzad said.

“Development will screech to a halt,” he said in an email. “This would increase housing costs and would make housing even more unaffordable.”

In December, Sunset MZM purchased a 10-unit bungalow complex on the eastern edge of rapidly gentrifying Echo Park. Two months later, the holding company filed to evict tenants. A real estate consultant for the company said it had not decided what to do with the apartments. Developers aren’t required to disclose their ultimate plans, only that they will take the units off the market.

Investment dollars have flooded this sleepy stretch of Sunset Boulevard as gentrification moves east. A luxury apartment complex—with penthouses priced as high as $6,500 a month—is scheduled to open soon near the bungalow complex. A Canadian developer has proposed a large apartment and retail complex just south of Sunset MZM’s investment. And a popular taco restaurant opened last year next door to Melina Vasquez’s bungalow at Sunset MZM’s complex, where she faces eviction.

A torrid housing rebound early last year has forced hundreds into similar situations. Many landlords can finally make a profit by selling their buildings or converting their use. The median home price in Los Angeles County rose 21.7 percent in February compared with a year earlier, DataQuick said.

“The market is coming back again,” said Hershel Mangoli, who recently filed evictions to build condos in the Sawtelle neighborhood on Los Angeles’ Westside.

In San Francisco, prices and evictions have climbed faster. Ellis evictions nearly doubled in the last year to 216 from 116, according to the city’s rent board.

Two state legislators from the city recently introduced bills to tighten the Ellis Act, an attempt that has often failed amid fierce opposition from the real estate industry. One bill, introduced by state Sen. Mark Leno (D-San Francisco), would allow San Francisco to bar property owners from using Ellis for five years after acquiring a building. Local jurisdictions throughout California could impose moratoriums on such evictions under another bill.

“Experience shows you can’t build your way out of an affordable housing crisis,” Assemblyman Tom Ammiano (D-San Francisco) said upon introducing the latter bill. “We have to do what we can to preserve what affordable housing we have.”

Evicted tenants have some cushion. In Los Angeles, landlords must pay $7,600 to $19,000 per unit for relocation expenses. But tenant groups say that money can evaporate quickly once longtime tenants start paying market rents.