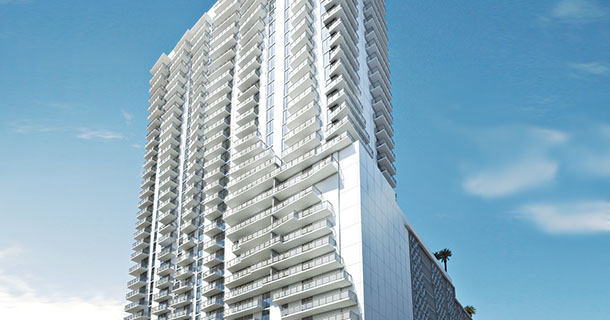 By the number of cranes active in the nation’s urban markets, the moniker that best describes multifamily in 2014 might be the year of the luxury high-rise.

Major metros are buzzing with activity as developers reach for the sky with housing aimed at young professionals who are migrating to urban centers—a trend Humphreys and Partners Architects calls the “Manhattanization” of the U.S.

According to Axiometrics, 74 apartment high-rises are slated for delivery this year, with another 81 scheduled in 2015.

When the only buildable infill land is sometimes as small as a half acre, the only way for developers like Orlando-based ZOM to build is up.

Other groups answering demand for multifamily high-rise include Atlanta-based Novare Group, with its Sky House-branded apartment towers rising in Tampa, Austin, Dallas, Houston, Atlanta, Raleigh and Charlotte, and The Related Group, which builds rental and for-sale product, whenever a market favors one or the other.

This taller product is more costly to build. The good news is that, while prices for infill parcels have increased, materials’ cost has remained flat, constrained by the tepid overall economy, compared with the previous boom cycle, when costs for concrete and metal were driven sky high by worldwide demand from emerging markets like India and China.

New construction methods also help defray costs, including the modular construction employed by Forest City Ratner at Atlantic Yards, where units that are pre-assembled in the factory are delivered to the site and Humphreys and Partners’ two-corridor design that is said to increase floor-plate efficiency and cut down the length of corridors.

With rental projects in various stages in Florida, Houston and Washington, D.C., ZOM closed in April on a site for approximately $16.8 million and expects to break ground in Q4 on a 46-story, 420-unit tower in Miami’s Brickell neighborhood. The company already is underway in downtown Miami on the 32-story, 462-unit Monarc at Met 3, where units will range from 680 sq. ft. to 1,450 sq. ft. Met 3 sits above a ground level Whole Foods and a 12-level parking garage. The apartments will begin pre-leasing in Q4 2015 and deliver in 2016.

Meanwhile, ZOM is building the 187-unit Beacon at Clarendon West, located a half block from the Clarendon metro stop in Washington D.C.’s Rosslyn/Ballston corridor, and 19Nineteen, a 191-unit mid-rise in Arlington, Va., that includes 17,500 sq. ft. of retail space on the ground floor. Both are scheduled to deliver this year.

The developer is active in Houston, as well, with its third apartment project there and eighth in Texas—a 431-unit mid-rise called The Hudson in the Galleria/Uptown market that will begin leasing in Q3 2015.

ZOM’s apartments are managed by its affiliate, ZRS, which also does third-party management for other institutions, and operates a portfolio in excess of 24,000 units.

In South Florida alone, there are 12,000 rental units under construction, 4,000 by The Related Group, 75 percent of which are high-rise in Miami–Dade and Broward Counties.

Because high-rise is a difficult process for those who don’t have a depth of experience with the product, it’s likely some of the projects in the planning and permitting stages won’t actually be built.

For instance, ZOM was not the first developer of its two Miami high-rises and came to both situations after the initial developers failed to perform.

“We were chosen to be the second developer because we have done this before and know how to execute well in this type of product,” said ZOM Chief Development Officer Greg West.

ZOM has developed more than 13,200 apartment units nationwide throughout its 30-year history and established a number of valuable capital relationships.

During the condo boom, a large number of apartment units in South Florida were converted to for-sale. This latest flurry of high-rise apartment development comes after the long lull caused by the recession and the bulk of newer existing rental supply in the market consists of investor-owned condos and single-family homes.

“There is a vast supply of housing out there in condo buildings with renters in them, yet there are few professionally managed options for people to choose from in Miami and none that meet the development standards of modern rental housing. To our view, we will have the first and only two purpose-built, professionally managed luxury builds in downtown Miami built to modern standards and I think that puts us at a significant competitive advantage over the shadow rentals and all of the difficulties that a renter has to deal with renting a unit in a building like that,” said West.

Washington, D. C., with 27,300 apartment units currently under construction, it is the market most at risk for overbuilding.

West believes ZOM’s projects there are somewhat immune to the softness affecting multifamily in D.C. because of the strength of the highly desirable, high-barrier R/B corridor. “Our Clarendon location is retail rich because of all the bars and restaurants and is a popular place to live for young professionals,” he said.

It’s what’s outside that counts

This generation of luxury apartments is targeting renters who can afford to pay more than $2 per sq. ft. The secret to catering to this demographic is creating a lifestyle experience with the amenities of a five-star resort.

“Having those kinds of areas, both indoors and outside—pool decks, outdoor fireplaces, lounges, bars, game areas—are all things that are critically important to the luxury renter.

“They want a nicely appointed unit, relatively small, and a great community space in the building and the ability to walk out the door to a lot of fun things,” said West.

Luxury amenities paid off for BNE Real Estate Group, which pulled out all the stops at its 139-unit, 11-story Warren at York in Jersey City’s historic Paulus Hook neighborhood. The property was already 90 percent leased when renters began moving in on May 1 with rents ranging from the $3,000s for 607 sq. ft. studios to the upper $5,000s for 1,789 sq. ft. penthouse units. pre-leasing began in April.

Another year of the rental

Most housing experts agree that 2014 will be another great year for the apartment industry.

Development slowed substantially during the recession, but prior to that, the housing boom shut out the rental market. The confluence of these two things created enormous pent-up demand and plenty of room for good development for years to come, said West.

“Because there was no supply for so long, as the economy started to improve, the rent growth was astronomical, unprecedented in my career. Will it continue? Absolutely not! It’s going to moderate substantially, I’m sure, and it will be flat in some places, but not the six, seven, eight, nine and ten percent increases, which is what it’s been,” said West.

One reason apartment demand remains strong is because Americans no longer view homeownership in the same way.

“Renters leave because they are going to buy and that’s always been the case in our business and will continue, but there is a permanent shift in people’s bias for renting, because they no longer see investment in a home as a risk free venture.

“To be able to avoid the risk and have the convenience of a professional manager taking care of the property and, in our case, to have urban amenities nearby, creates a good demand for urban living in rental housing,” said West.

Another reason people are choosing to rent, says Jack McCabe, founder and CEO of McCabe Research and Consulting LLC, has to do with jobs and where people are finding them.

“People are moving for jobs because it’s difficult to get one that pays well. The pitfall in Florida during the downturn was we didn’t have a lot of jobs created. There were jobs in Texas, however, but homeowners in Florida couldn’t move to Texas because they couldn’t sell their homes. So, to young people who learned from the recession, mobility is one reason they don’t see homeownership as the greatest thing. They know they may have to move to get a good paying job,” points out McCabe.

Condos back in a big way

The flipside of the high-rise rental story is that a resurgence of condo development is underway from coast to coast. Still 30 percent short of the previous peak, condos’ share of total existing home sales is approaching pre-recession levels, reports CoStar Group.

New York City is leading the way with some of the tallest buildings, while the West Side waterfront along the Hudson River is being called the new condo coast.

In Chicago, construction is underway in the South Loop on the city’s first condo tower since the housing bust—the 15-story, 144 unit 1345 Wabash by developer CMK Companies.

And, in Boston, The Related Group and partner The Beal Company, revamped their previously approved 14-story apartment tower in the West End Bulfinch submarket—switching from rental to for-sale.

But nowhere is condo activity frothier than in South Florida, where condo was once king.

Those projects are funded by the buyers, not the banks, with a very heavy deposit structure designed to help developers avoid overleveraging, said West. As much as 80 percent of the purchase price of the unit is buyer-funded through deposits through the course of construction.

At least 186 condo towers with 25,125 units are proposed in South Florida—some already in development with sales prices that top the previous boom. Around 50 with a total of 14,000 units are proposed or under construction along a 60-mile stretch of Miami’s Brickell Ave., representing more than 65 percent of the construction pipeline for South Florida’s entire tri-county area.

The Related Group has proposed more than half of those—29 projects with a total of 7,500 units—and in January broke ground on the SLS Hotel and Residences Brickell, a condo project that stalled during the last housing bust. Like all condos being built in South Florida today, they are aimed at ultra-wealthy international buyers.

McCabe warns, “Buyer beware!” He believes hedge funds are artificially pumping up prices in many markets. “In South Florida, we’ve seen increases of 20 to 37 percent in real estate values in the last year. There’s no legal investment I know of that has returned those kinds of appreciation,” he said.

He explained that hedge funds swooped into South Florida after the 2007 housing bust and bought tens of thousands of condos in bulk. Entire projects were bought at bargain prices – discounts of 50 to 75 percent off 2006 top-of-market prices.

“Then, around 2011, the hedge funds and other corporate buyers changed strategies and bought foreclosed-on single-family homes at huge discounts. In 2013, they shifted again, now paying full price and above, artificially inflating prices and values. High net worth individuals from South America followed suit,” he said.

McCabe believes the majority of South Americans and Asians who would or could buy new condos in South Florida have already bought most of the existing inventory and put deposits on the newly announced projects in the Brickell area and Eastern Dade.

“So new projects and those yet to be announced face increased competition for a dwindling supply of buyers,” he said, noting that the hedge funds have now moved on to greener pastures in secondary markets.

McCabe, who forecast the previous housing bust, is seeing signs of a bubble in the for-sale housing market. “It’s a hot topic right now and analysts are split. I personally think there is danger of a bubble, not nationally, but in those states where we saw the greatest rise in artificial appreciation and the rocket came crashing back to earth with 50 to 60 percent drops in prices. California is getting into bubble territory and Florida and, three or four years from now, Las Vegas and Phoenix,” he predicts.