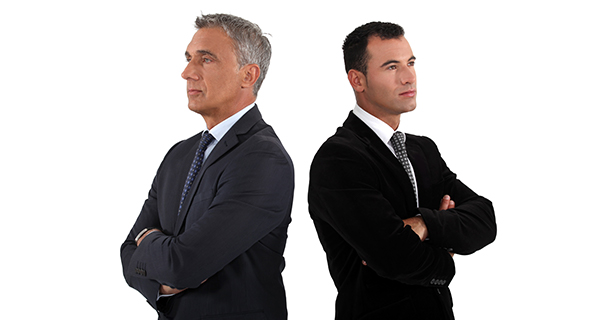 What the experts say

As people work longer and delay retirement, internal career paths have changed. “Organizational careers don’t look the way they did before,” says Peter Cappelli, professor of management at the Wharton School and coauthor of Managing the Older Worker. “It’s more common to see someone younger managing someone older.” This can lead to tension on both sides. “Maybe there is a feeling of: why am I being bossed around by someone without a lot of experience? On the other hand, maybe the younger person feels insecure and wonders: how do I do this?”

“It’s important to be aware of generational tension—loosely defined as a lack of respect for someone who’s of a different generation from you—among colleagues,” says Jeanne C. Meister, a founding partner of Future Workplace, a human resources consultancy and the coauthor of The 2020 Workplace. “It’s your job to help your employees recognize that they each have distinct sets of skills and different things they bring to the table,” she says. Here’s how.

Don’t dwell on the differences

The Boomer mystified by Facebook; the Millennial who wears flip-flops in the office; the Traditionalist (born prior to 1946) who seemingly won’t ever retire; the cynical Gen Xer who’s only out for himself; and the Gen 2020er—born after 1997—who appears surgically attached to her smartphone. Generational stereotypes abound but according to Cappelli, “they are just not true. There is no evidence that 35-year-old managers today are any different from 35-year-old managers a generation ago.” Besides, your goal is to help your team “move beyond the labels.” Generation-based employee affinity groups are a waste of time and energy, he adds. Don’t assume people need special treatment and “don’t dwell on differences with a group discussion that devolves into: ‘People my age feel like this.’ Or ‘All Boomers act a certain way.’ There’s a lot of variation,” he says. “Get to know each person individually.”

While it may seem daunting to manage someone much older than you, try taking a cue from the military. The U.S. Marine Corps routinely puts 22-year-old lieutenants in charge of 45-year-old sergeants, notes Cappelli. “The mindset is to make that person your partner and involve them in everything you do. You’re still the boss and the one making the decisions, but you should hear them out.”

A collaborative approach works well when managing workers who are in their 20s, too. “They are used to discussion and engagement because that’s what they had in the college environment,” Cappelli says. Help your employees make the transition from school to the workplace by encouraging debate. “You don’t necessarily need to take their advice, but be aware that this is where they’re coming from,” he says.

“Just as you would research a new product or service, you need to study the demographics of your current workforce and the projected demographics of your future workforce to determine what they want out of their jobs as these things are different generation to generation,” says Meister. If your company conducts an annual survey of vision and values, Meister suggests adding new questions to the mix, such as queries about your employees’ preferred communication style and planned professional paths. Then “use that information to look critically at your human resources and business strategies.

Figure out: What matters to different sets of employees? What can you do to attract younger or more experienced workers? It’s a low cost way to get a pulse on generational career issues,” says Meister.

Reverse or reciprocal mentoring programs, which pair younger workers with seasoned executives to work on specific business objectives usually involving technology, are increasingly prevalent in many offices. “The younger person—who grew up with the Internet—teaches the older person about the power of social media to drive business results,” says Meister. Meanwhile, the more experienced employee shares institutional knowledge with the younger worker.

Mixed-age work teams are another way to promote cross-generational mentoring. “Studies show that colleagues learn more from each other than they do from formal training, which is why it is so important to establish a culture of coaching across age groups,” says Meister. In mixed-age teams, mentoring relationships develop more naturally, adds Cappelli. “Older folks are more likely to fall into a mentor role and help the young employees,” he says. Meanwhile, young people often find it easier to take advice from an experienced worker than from one of their peers “because they’re not competing in the same way,” he says.

When it comes to inspiring and incentivizing employees who are much older or much younger than you, it helps to think like an anthropologist. “Consider where your employees are in their lives and what their needs are,” says Meister. Younger people, for instance, typically don’t have many outside obligations; work-wise, they are motivated by new experiences and opportunities.

Employees in their 30s and 40s, on the other hand, often have children and mortgages and are in need of flexibility as well as “money and advancement” says Cappelli. Workers at the end of their careers “are probably not as interested in training, but they do want interesting work and work-life balance,” he says. “Understanding the characteristics around these predictable life paths will help you figure out how best to divvy up work assignments and also the best ways to manage and motivate your team.”

Ron Garrow, chief human resources officer at MasterCard, is not a technophobe, but he readily admits that social media didn’t come easily to him—at least at first. “I recognized that I had a lot to learn about operating in this new world,” says Ron, who is 51.

So he volunteered to take part in a reciprocal mentoring program run by one of MasterCard’s internal business resource groups. The program partners young employees with older colleagues to work on tech skills. Ron was assigned a coach, Rebecca Kaufman—24 years old and an avid social media user—who taught him how to use Twitter and how to get more out of professional networking sites, such as LinkedIn. “Rebecca has shaped my thinking in terms of how I operate in the social space,” says Ron. “I now carve out time in my day to get on LinkedIn and I have a better appreciation for the importance of social media.”

Working with Rebecca also helped Ron relate to Millennials as both the consumers and workforce of the future—a critical insight considering the changes taking place in MasterCard’s industry. “This new generation is shaping the future in terms of purchasing habits: They don’t use cash to buy things; they use electronic means. As a result, MasterCard’s job descriptions have changed.” Rebecca also benefits from the relationship: Ron provides professional counsel and is also helping improve her communication skills.

Today hundreds of MasterCard employees take part in the program, which is currently offered in five offices. “There’s a contagion going on—people are raising their hands and saying: ‘I want a mentor.’ It’s really about making yourself vulnerable,” he says.

Case study #2: Motivate your employees with incentives that matter to them

Kris Snyder—the founder and CEO of Vox Mobile, the mobile technology management company based in Cleveland, Ohio— offers his 130 employees a veritable cafeteria of benefits, compensation, and work assignments. “I think of my employees as a cast of characters,” says Kris, who is 42. “Everyone’s needs are different, so we can’t be a one-size-fits-all employer.”

The majority of Vox Mobile’s sales force —about 85 percent—are just out of school and on their first or second job. Its leadership team, however, is comprised of people in their 30s and 40s.

To appeal to these different age groups, he has developed different sets of employee perks based mainly on where these two age groups are in their personal and professional lives. “I noticed that these groups have different motivations and, therefore, they need different incentives,” he says. “There are no hard and fast rules, but generally speaking, my Gen Y workers want us to fund their LinkedIn accounts; they like things like branded gear and company-sponsored happy hours—they’re more social and they’re not going home right after work. Gen Xers don’t care about logoed backpacks; instead they are looking at our 401(k) matching plan and our healthcare provisions.”

The different incentive packages and perks will likely shift along with the company’s demographics, says Kris. “As we build and grow and as the company goes through different stages, the makeup of our workforce will change, too,” says Kris. “We will navigate those changes and experiment with new ways to incentivize employees.”