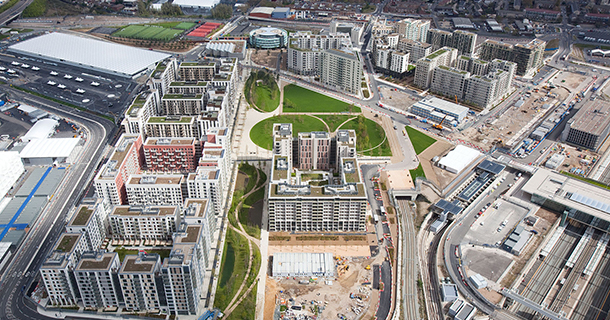 In the U.S., the multifamily sector is dominated by huge companies which own hundreds of thousands of units. But in most of Europe, rental-apartment ownership is fragmented. In the U.K. and France, private landlords typically own only a handful of apartments. In Germany and the Netherlands, corporate landlords are relatively small.

That is beginning to change. In the U.K., France and Spain, institutions are accumulating multifamily properties. While the portfolios they have built are still tiny compared to those of the U.S. giants, the fledgling industry in Europe is being powered by demographic changes, strong real-estate sales, opportunities created by the financial downturn and government actions designed to encourage development.

One sign of growth: foreign investment. In London, for example, a venture of Qatari Diar Real Estate Co. and Delancey is converting the former Olympic village into a massive apartment rental project that could eventually have more than 3,000 units. In Spain, Blackstone Group has purchased 4,000 units. The firm may decide to expand the portfolio further; it is still studying the sector, according to people familiar with the plans.

Legal changes also are paving the way. In France, a law passed in 2013 introduced tax breaks that are meant to encourage developers and investors to pair up to build new, purpose-built multifamily buildings, said Vincent Mahé, general counsel at Groupe SNI. The company, which manages about 100,000 homes rented out at market prices and 200,000 government-subsidized homes, closed a $595 million fund in June to build 5,000 new multifamily units. It expects to increase the fund to $809 million by next summer.

SNI’s fund, which pulled in investments from mostly French life insurers, shows “something is changing in the way French institutions are looking at residential,” Mahé said. The Intermediate Housing Fund will aim to offer investors a yield of 3.5 percent to 4 percent annually.

Europe has been slow to develop a U.S.-style multifamily sector partly because the rental properties vary greatly on the continent. European apartments tend to be older and aren’t standardized like the huge apartment complexes found in suburbs throughout the U.S.

What is on the market “is, to say the least, variable in quality,” said Adam Challis, head of residential research at property broker JLL. “Compared with North America, even the more developed residential markets like Germany and the Netherlands are still largely biased toward historic, government-subsidized housing stock than the higher-quality stock you’d find, for instance, in Boston.”

Even though some laws are changing, regulatory factors in Europe still can tend to discourage the growth of a multifamily industry. For instance, in countries including Austria, Denmark, Germany and Sweden, it is hard to evict tenants.

“People need places to live, and you’ll find governments can regulate that right heavily,” said Marcus Cieleback, head of research at German property firm Patrizia, for which multifamily units make up half of its $16 billion under management.

Still, Germany’s multifamily sector is the most mature. Its apartment rental market, the biggest in Europe, got its start after World War II, when local governments built hundreds of thousands of units for residents of cities whose urban centers had been ravaged. In the early part of this century, local governments, short on cash, sold portfolios of formerly public housing to international investors.

In 2014, institutional investors made some big bets in the German multifamily market. Real-estate firm Deutsche Annington Immobilien SE in December agreed to buy rival Gagfah SA for $4.49 billion. The deal, pending a broadly expected shareholder approval, would create the largest landlord in the country, with 350,000 homes.

Pension funds and other institutions also are becoming more comfortable owning multifamily property outside their home countries. Analysts say part of this is because of fundamentals: Populations are shifting into urban centers, and people in some countries are increasingly renting instead of owning. Also, multifamily property has a history of stable, long-term returns.

Meanwhile, the political winds are changing when it comes to the multifamily sector. For example, the government in the Netherlands is concerned that housing associations created in the 19th century to provide subsidized accommodation to the poor—but which now own about 33 percent of all Dutch homes—have too much control over the market. The groups are being encouraged to sell off large portfolios to international investors.

In the U.K., local governments concerned about an acute housing shortage are assisting developers more than in the past. Gatehouse Bank PLC, which is building 927 new private rental homes in the north of England, was able to buy land for the development from local governments at a discounted price. The Greater London Authority placed certain restrictions on the sale of land, allowing Realstar Living, a U.K. subsidiary of Canadian residential investor Realstar Group, to buy it for a price that supported a multifamily development.

“You’ve got strong long-term trends supporting the sector, which we think is going to professionalize further,” said Jos Short, executive chairman at U.K. firm Internos Global Investors, which manages $5.6 billion of real estate and is exploring opportunities in the U.K. and the Netherlands. “And you have some interesting return characteristics. You put all that together and you’ve got quite a nice strategy.