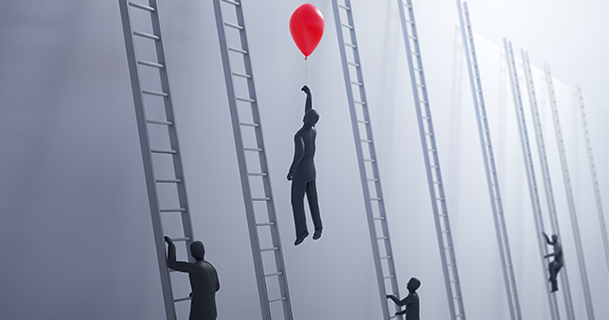 Maybe you’ve worked with someone who met deadlines and followed through, but for some reason couldn’t move forward on the goals they set for themselves? Or does that description fit you?

In researching and writing Better than Before: Mastering the Habits of Our Everyday Lives, I realized that all of us differ dramatically in our attitude toward habits, and our aptitude for forming them. From my observation, I began to realize that just about everyone falls into one of four distinct groups: Upholders, Questioners, Obligers, and Rebels.

The key question is: How do you respond to an expectation? We all face two kinds of expectations:

Upholders respond readily to both outer expectations and inner expectations. They’re self-directed and have little trouble meeting commit­ments, keeping resolutions, or meeting deadlines (in fact, they often finish early). They really want to understand and meet expectations—including their expectations of themselves. This creates a strong instinct for self-preservation, which serves as a counter-weight to others’ expectations.

However, Upholders may struggle in situations where expecta­tions aren’t clear. They may feel com­pelled to meet expectations, even ones that seem pointless. They may feel uneasy when they know they’re breaking the rules, even unnecessary rules, unless they work out a powerful justification to do so. I know this tendency well; I’m an Upholder myself.

Questioners question all expectations, and will meet an expecta­tion only if they believe it’s justified—they’re motivated by reason, logic, and fairness. They decide for themselves whether a course of action is a good idea, and they resist doing anything that seems arbitrary or lacks sound purpose. Essentially, they turn all expectations into inner expectations.

Because Questioners like to make well-considered decisions and come to their own conclusions, they’re intellectually engaged, and willing to do exhaustive research. If they decide there’s sufficient basis for an expectation, they’ll follow it; if not, they won’t.

However, the Questioner’s appetite for information and justifica­tion can become tiresome. Questioners themselves sometimes wish they could accept expectations without probing them so relentlessly. A Questioner told me ruefully, “I suffer from analysis paralysis. I always want to have one more piece of information.”

They don’t let others down, but they may let themselves down. Because Obligers resist inner expectations, it’s difficult for them to self-motivate—to work on a PhD thesis, say, or attend networking events. A journalist who has no trouble meeting his weekly deadlines, but can’t ever seem to find time to work on his own book, is a classic Obliger.

The weight of outer expectations can make Obligers susceptible to burn-out, because they have trouble telling people “no.” An Obliger explained, “I drop everything to proofread my colleagues’ reports, but I’m terrible about making time to work on my own priorities.”

Obligers, in fact, may reach a point of Obliger-rebellion, a striking pattern in which they abruptly refuse to meet an expectation. At a certain point, the weight of expectation becomes too great, and they suddenly snap.

Rebels resist all expectations, outer and inner alike. They choose to act from a sense of choice, of freedom. They resist control, even self-control, and enjoy flouting rules and expectations.

Rebels work toward their own goals, in their own way, and while they refuse to do what they’re “supposed” to do, they can accomplish their own aims.

Rebels place a high value on authenticity and self-determination, and bring an unshackled spirit to what they do. At times, the Rebel resistance to authority is enormously valuable to society—but Rebels often frustrate others because they can’t be asked or told to do anything. They don’t care if “people are counting on you,” “you agreed to do it,” “it’s against the rules,” “this is the deadline,” or “it’s rude.”

In fact, asking or tell­ing Rebels to do something often makes them do just the opposite. People around Rebels must guard against accidentally ignit­ing their spirit of opposition. At the same time, Rebels are often strongly motivated by the idea “I’ll show you.” For instance, tell a Rebel, “I don’t think you can get that draft ready for review by Friday” and he may turn it in on Thursday just to prove you wrong.

Rebels sometimes frustrate even themselves since they can’t tell themselves what to do.

These tendencies are hardwired, but with greater experience and wisdom, we can learn to counterbalance our tendency’s negative aspects. As an Upholder, for instance, I’ve learned to resist my inclination to automatically meet an expecta­tion, and to ask, “Why am I agreeing to this, anyway?”

When trying to persuade others to act, you’ll have more success if you consider their tendency, whether you’re a boss trying to help an employee meet her deadline or a healthcare provider trying to prod a patient to take his medication.

From what I’ve observed, most people, by a huge margin, are Questioners or Obligers. Very few are Rebels, and, to my astonishment, very few are Upholders. Because Upholders and Rebels are such small populations, those who try to shape people’s behavior on a large scale—employers, device manufacturers, insurance companies, instructors—do better to focus on solutions that help Questioners, by providing sound reasons, and Obligers, by providing accountability.

The happiest and most successful people are those who have figured out how to capitalize their tendency to their benefit and, just as importantly, how to offset its limitations. By understanding ourselves and others better, we help ourselves to build happier, healthier, and more productive lives.

Author: Gretchen Rubin is the author of Better Than Before, and the bestsellers The Happiness Project and Happier at Home. Rubin began her career in law, and was clerking for Supreme Court Justice Sandra Day O’Connor when she realized she wanted to be a writer.