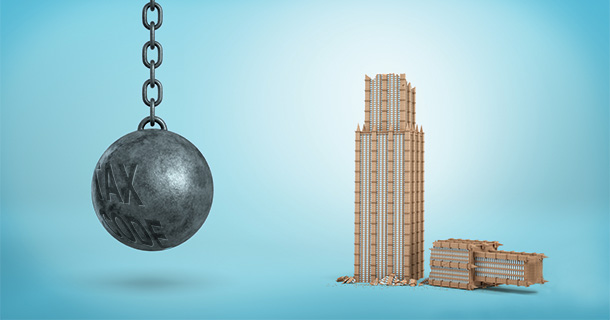 “There was a conversation about how we need to do something proactive with the idea of mobilizing our grassroots network to get them involved in the process,” said NAA President and CEO Robert Pinnegar in mid-June.

That conversation resulted in the launch of the Protect the Lease initiative that was created by the two legislative advocates for the apartment industry and announced on May 22.

According to the announcement, the campaign’s objective is “to ensure that the Trump administration and Congress understand what’s at stake for the national apartment housing industry and, ultimately, the U.S. economy, as they look to overhaul the U.S. tax code.”

Both organizations see the initiative as a key tool, alongside direct legislative advocacy and other efforts, as the multifamily industry employs a comprehensive approach to defend against a repeat of the devastation caused by the Tax Reform Act of 1986, which destabilized the industry, NMHC President Doug Bibby explained in an op-ed piece in March.

Real estate values tumbled in the wake of the act, when passive investors could no longer deduct real estate losses against income earned from their primary jobs.

That tax code overhaul loosened regulations to such a degree that it precipitated the savings and loan crisis and made real estate investment less attractive by eliminating the capital tax differential, pulling back on limitation rules and extending the tax write-off period for real property.

The apartment industry learned two very important lessons from that tax debacle, said NMHC VP of Tax Matthew Berger, who is responsible for representing the interests of the multifamily industry before Congress and federal agencies on tax issues.

“The first is that details really matter, because a lot of what hurt the real estate industry in 1986 was put in at the very end of the process,” he explained.

It’s important for those policy makers to listen to those who are actually doing business across the country and learn, from a boots-on-the-ground perspective, just how changes to the tax code are going to affect them.

The apartment industry’s biggest mistake in 1986 was waiting too long to get in the game, he said.

Commercial real estate has traditionally taken a wait-and-see attitude toward political advocacy, but that stance would work to the detriment of the apartment industry in this tax reform process, Pinnegar said.

Both he and Berger listed issues that are especially critical to the industry, including the proposed taxation of pass-through entities like LLCs, S corporations and partnerships, which NAA and NMHC believe would amount to double taxation, impacting the return that the investor receives and discouraging investment in development.

Elimination of like-kind exchanges also has been proposed by the tax reformers, based on the argument that such deals are a tax delay ploy. “It’s a tax deferral, not a way to avoid taxes,” Pinnegar said.

Possible increases of depreciation rates also are under consideration and of concern to the apartment industry, said Berger, adding that an MIT study commissioned recently by NMHC suggested that a multifamily building should really be depreciated over 19 years.

“We don’t necessarily need it to be shorter than (the current) 27.5 years, but we’re very concerned by any proposal that would take it out to 40 years or more,” Berger said, adding that preservation of the low-income housing tax credit program, the nation’s only driver of new affordable housing, which has made possible the building of three million units since 1986, is “absolutely critical.”

And carried interest, which makes multifamily a viable investment opportunity for developers, is really key, as well, he said, adding that curtailing of business interest deductions would increase the cost of borrowing, slow new construction and push up rents.

Through the Protect the Lease initiative, NAA’s membership is actively working to alert lawmakers to the dangers to the apartment industry of those and many other proposed tax changes currently under consideration.

“As of late July, we’ve sent nearly 126,000 messages to Congress. Every senator and every representative has received messages from us from all the states, including Washington, D.C., so we’ve had incredible success with this,” said Pinnegar.

At NAA’s interactive kiosk at the organization’s annual education conference and exhibition in Atlanta in mid-June, 148 members recorded video messages, while several hundred others wrote personalized messages to Congress detailing their tax reform concerns, which will be used to showcase the human face of the industry, he said.

It’s important that the legislators understand how the proposed tax changes might impact people in the real world, how they could affect a couple who’s putting away a retirement nest egg or how it might impact a syndication group that’s planning to build or buy an apartment property, said Pinnegar.

And that’s what Protect the Lease is designed to achieve.

While the tax overhaul process drags on, stymied by Senate inability to come to a consensus on health care, which is a necessary precursor to tax reform, and recently delayed again by the absence of Sen. John McCain (R-AZ) after surgery in mid-June, the tax reform effort could drift into 2018 and the apartment industry is seeing some negative impact due to the delay.

“We’re already seeing some influence around the edges,” Pinnegar said. “Affordable housing projects that use tax credits are seeing a reduction in the value of those tax credits because of the uncertainty of what they’re going to be in the future. So, it is impacting some affordable developments.”

Meanwhile, via the Protect the Lease program, NAA is continuing to cultivate and expand its group of volunteer advocates.

“This just gives us more time to grow our ranks and be able to be more successful and, ultimately, win the battle,” he said, quoting a panelist at a recent breakfast meeting he attended, who said, during a conversation about proactive political advocacy versus old-fashioned wait-and-see lobbying, “You don’t wait until you’re thirsty to start digging a well.”