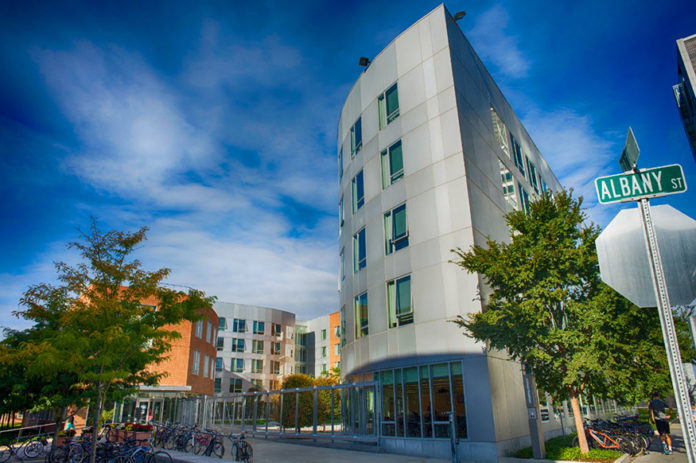 Over the past couple of years, on-campus student housing has seen an overall expansion through initiatives to renovate existing facilities and expand a generally more modern housing concept. In contrast to the old and crowded dorm-style residence halls built in the past, many universities now strive to develop structures more comparable to what is seen off campus.

On-campus housing increased about 5.2 percent between 2011 and 2015, from 2.9 million beds to 3.1 million beds, according to the most recent data available from National Center for Education Statistics. In the current student housing development cycle, universities experienced higher growth of on-campus housing in 2013. Expansion of on-campus student housing is generally due to enrollment growth, retention rates and student preferences. 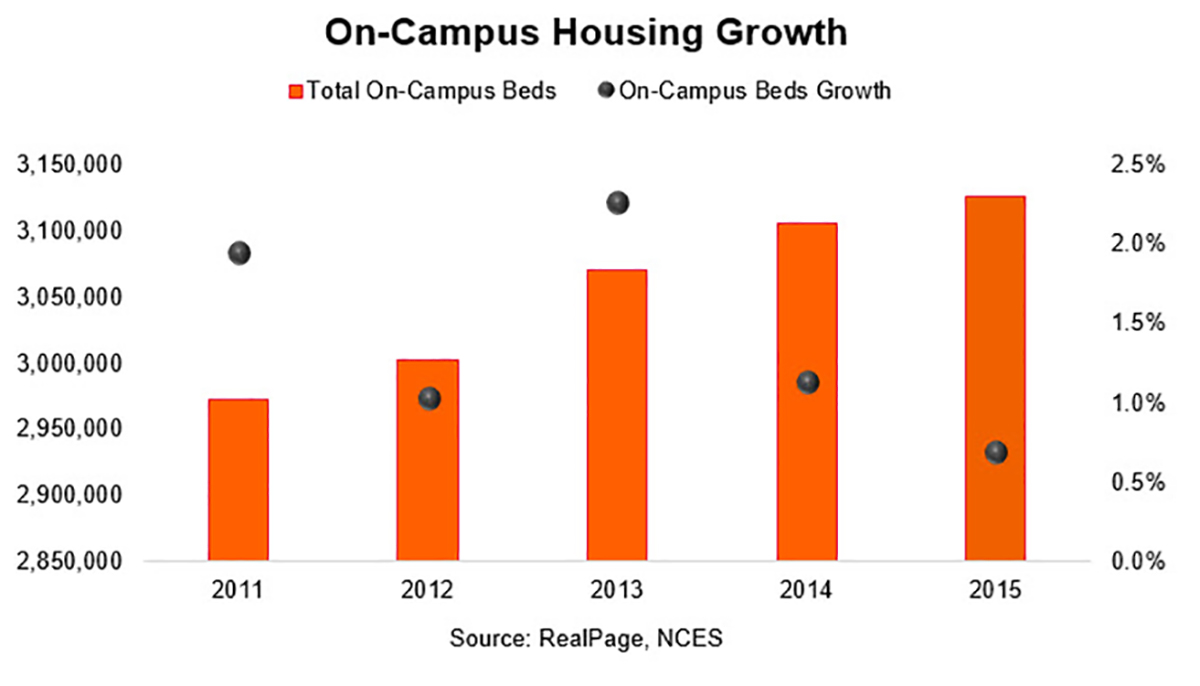 If universities are grouped into four categories based on enrollment size (as shown in the chart below), universities with greater levels of enrollment growth have, unsurprisingly, experienced greater levels of on-campus housing expansion during the current development cycle. This analysis and the chart below reflect universities tracked by RealPage and for which enrollment data was collected for Fall 2016, the most recent enrollment data available from NCES. This can be partially attributed to the fact that larger universities are flagship state institutions, which naturally have a larger student population and typically receive a large amount of state funding. 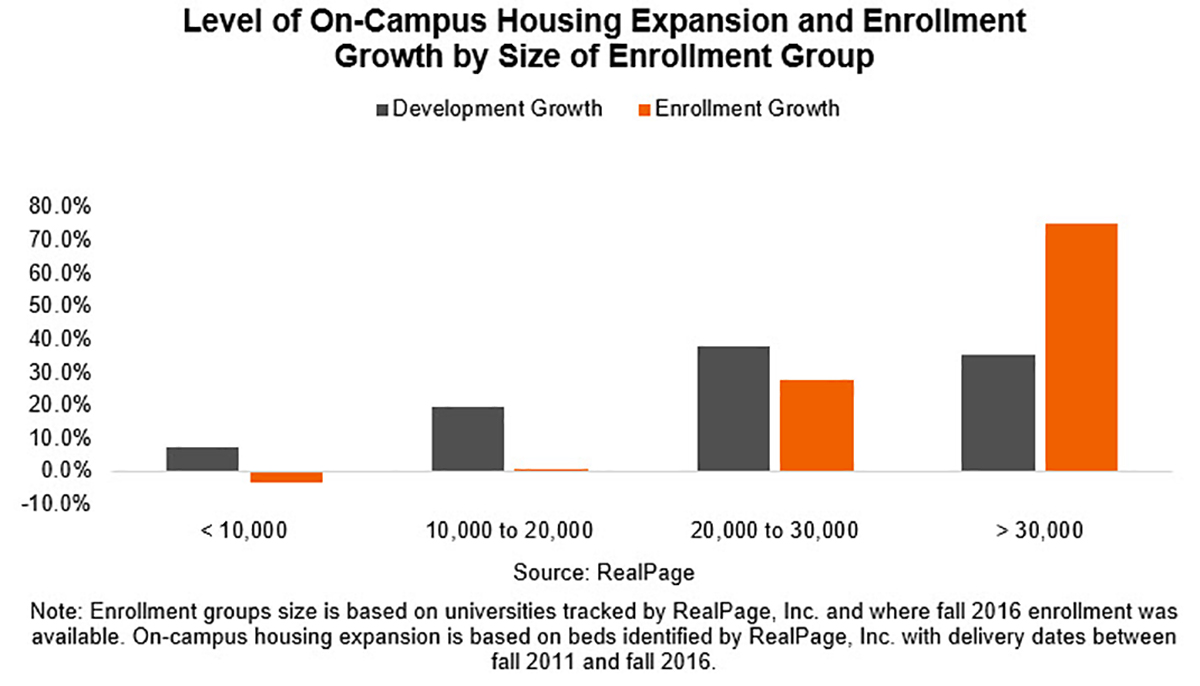 Some of the universities that have had major development and renovations to their on-campus housing are below.

The University of Kentucky, with an enrollment of just under 30,000 students, experienced on-campus housing development and renovations every year from 2013 to 2017. The university averaged 1,300 new or renovated beds per year, with the most beds (2,300) delivered in 2014. Housing development and renovations were at the top of the institution’s strategies in its 2012 Master Plan and progressed largely through a then-new public-private partnership with student housing REIT EdR. The college increased its housing capacity from 2012 to 2017 by over 2,300 beds, on net. One of the major benefits that the university saw in this initiative was the improvement of student recruitment and retention and the creation of a sense of community by providing the amenities and study space that students typically seek. The university’s freshman retention rate has increased from 81 percent in 2012 to 83 percent in 2017 and its graduation rate has grown from 56 percent in 2012 to 66 percent in 2017. Its latest on-campus housing delivery contains all the amenities that the school was envisioning for their students. The University Flats opened in fall 2017 and houses undergraduate and graduate students in two- and four-bedroom fully-furnished units. Each unit includes a washer and dryer, a full kitchen with stainless steel appliances, granite countertops, high-speed wired and wireless internet access and digital cable. The student apartment complex include study rooms on each floor, recreation rooms and covered bike parking.

With a student enrollment of nearly 34,000, San Diego State University faces a generally high demand for on-campus housing, prompting the school to implement a construction and renovations program. Over the past seven years (2011-12 to 2017-18), the school has maintained a 96.9 percent average housing occupancy. During the same time period, net housing capacity has increased by almost 1,500 beds, going from 3,700 in 2011 to nearly 5,200 in 2017, due to renovations and expansion of on-campus housing facilities, which are scheduled to be completed by fall 2019. As part of these housing initiatives, the school is focused on improving student safety and comfort while providing them with utility-efficient units and resourceful amenities. Such resources include seismic upgrades, fire prevention and suppression, heating systems, furnished units with double-paned windows and low flow fixtures, study lounges and meeting rooms, as well as opportunities for residents to attend seminars. Some of these qualities can already be experienced in the 2017 on-campus deliveries such as North and South halls located in former Plaza Linda Verde, now known as South Campus Plaza.

The University of South Florida incorporated upgrading and expanding student housing facilities in its 2015-2025 Campus Master Plan Update. The university partnered with a well-known student housing developer to replace the existing Andros hall with a new development, The Village, that will expand existing capacity by about 1,000 beds upon completion. The 61,000-student institution saw two of the communities that are part of The Village ready for occupancy in Fall 2017. These two communities, the Beacon and the Summit, have a capacity of 378 beds and 499 beds, respectively. The remaining complexes – Endeavor Hall, Horizon Hall and Pinnacle Hall – that will comprise the public-private partnership are on schedule to open for Fall 2018. Once The Village is completed, the Tampa campus will have an on-campus student housing capacity of about 6,500 beds. Some of the upgrades that South Florida may already appreciate in their new, suite-style student housing facilities include individual built-in closets and fully furnished units, in-room ethernet connection and Wi-Fi throughout the building. Ground amenities include gaming area, media lounge, TV lounge, multipurpose room and conference room.

University of Texas at Dallas

The University of Texas at Dallas has been working on expanding their on-campus housing, as outlined on their plan of Strategic Opportunities, since at least 2009, when enrollment growth began to accelerate. Enrollment growth has averaged 7.1 percent per year since 2009, well over the historical 4.5 percent annual average growth. Since then, UTD has added 3,000 beds, on net, to their on-campus housing through distinct deliveries. This university is a younger institution that has had apartment-style student housing instead of dorm-style residences. The school has expanded their on-campus housing with additional modern-style developments. With UTD’s rapidly increasing enrollment – resulting in more than 27,000 students as of Fall 2017 – demand for on-campus housing remains high. The school remained at an average annual occupancy of 97.4 percent per year since 2009. Occupancy fell below 97 percent in 2017 for the first time in eight years, mainly due to the 800 new beds delivered this past fall. Features seen in the newly developed on-campus housing include fully furnished units with wireless internet, peer advisors, study nooks, meeting room and bicycle racks and repair stands.