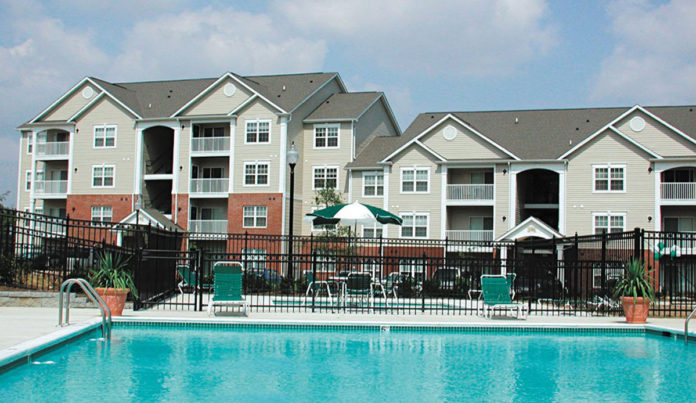 The NHP Foundation (NHPF), a national not-for-profit dedicated to preserving and creating sustainable, service-enriched multifamily housing, has acquired the 176-unit Woodmont Crossing Apartments. The $44.6 million transaction was made possible through a $25.5 million loan from the District of Columbia Housing Finance Agency (DCHFA) financed through that agency’s first time participation in U.S. Department of Housing and Urban Development (HUD) Level 1 50/50 Risk Share 542 (c) program. LIHTC Equity financing of $12.1 million was provided by Royal Bank of Canada (RBC).

As part of the DC Tenant Opportunity to Purchase Act (TOPA), The Woodmont Crossing United Tenants Association exercised its right and selected The NHP Foundation to partner on the acquisition and rehabilitation of the two and three-bedroom unit property.  The residence is a Year 15 Low Income Housing Tax Credit (LIHTC) property with 100 percent of units priced for residents earning 60 percent of AMI (Area Media Income) or less.

“We were selected by the tenants because of  willingness to jointly create a vision of the future of Woodmont Crossing, our mission of providing service enriched housing, and our track record of getting developments done,“ said Neal Drobenare, NHPF SVP of Acquisitions, about NHPF’s fifth successful TOPA acquisition in the DC area.  “We had a tight deadline on this project and DCHFA and RBC got us closed in six months from start to closing.  As a TOPA purchase, if we had not closed on time, the property would have gone back to the original contract purchaser.”

The NHP Foundation’s four previous TOPA projects in the DC area are Takoma Place, Parkchester, Benning Hts., and Anacostia Gardens, which are all thriving.  Of the current Woodmont Crossing purchase, Chaiko Lewis, President of Woodmont Crossing United Tenants Association said, “In NHPF we found a partner who understands our community and what is needed to provide long term benefits to our residents,” adding “NHPF will maintain our rents and perform in-place renovations that work with our schedules.” The property hasn’t been renovated since its opening in 2002.

“The Woodmont Crossing partnership enables DCHFA to continue to provide District residents access to high-quality affordable housing,” said Todd A. Lee, Executive Director/CEO, DCHFA. “And, by becoming a Risk Share lender, we are able to shorten the process and be a source of additional funding needed for the ongoing production and preservation of such projects.” DCHFA is the only housing agency in the District of Columbia that participates in the program which focuses exclusively on affordable production and preservation.

Added Christopher Donald, Sr. Vice President, DCHFA, “The Woodmont Crossing/NHPF purchase represents the kind of creative partnerships that are needed to preserve housing for families and seniors in the D.C. area, we’re pleased to be part of this community’s bright future.”

NHPF plans on investing $42,000 per unit in rehabilitation which includes kitchen and bath upgrades as well as making five percent of the units fully accessible.

About The NHP Foundation
Headquartered in New York City with offices in Washington, DC, and Chicago, IL, The NHP Foundation (NHPF) was launched on January 30, 1989, as a publicly supported 501(c)(3) not-for- profit real estate corporation.  NHPF is dedicated to preserving and creating sustainable, service-enriched multifamily housing that is both affordable to low and moderate income families and seniors, and beneficial to their communities.  NHPF also provides a robust resident services program to nearly 18,000 community residents. Through partnerships with major financial institutions, the public sector, faith-based initiatives, and other not-for-profit organizations, NHPF has 46 properties, including 7,969 units, in 15 states and the District of Columbia.