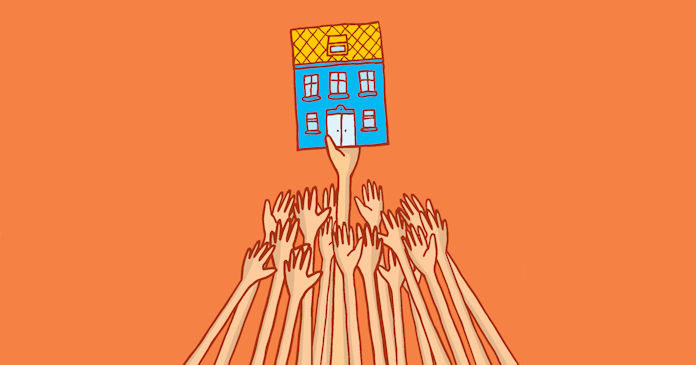 The Haas Institute for a Fair and Inclusive Society at UC Berkeley has issued a policy brief intended to lay out the case for re-introducing rent control in California. The report gives insight into how rent control advocates view the state of the housing market and what benefits they think would derive from rent control. This writing focuses on one argument put forth in the report.

The first part of the report, titled “Opening the Door for Rent Control,” submits the case that rents are too high. It charts show how rents have increased faster than incomes since the year 2000. It also asserts that housing affordability is worse for renters than it is for owners. The report seeks to link a number of social pathologies to housing instability.

This discussion is not the focus of this commentary and interested parties can read the full report if they are interested.

The second part of the report, titled “The Need for Rent Control in Achieving Housing for All”, contains a number of arguments for why rent control is a reasonable approach for solving California’s housing shortage.

One argument put forth in the report is that “public improvements as well as maintenance of public goods and services are made possible through the taxes paid by the general public, homeowners and tenants alike. Because land value tends to increase when public investments are made, regulation of land value simply recaptures value created by the public.” In other words, because “landlords didn’t build that,” the government is justified in taking away some of the value of the landlord’s property by limiting the return that he is able to achieve from it.

Maybe you did build that

The authors of the report did not consider the list of fees that a developer must pay before building a new multifamily (typically 10 or more units) housing project. In San Francisco, these include infrastructure impact fees of up to $16.98 per sq. ft., an inclusionary affordable housing program fee varying from $198,000 for a studio unit to $521,000 for a four-bedroom unit, a child care fee of up to $2.03 per sq. ft., a school impact fee of up to $3.79 per sq. ft. and a transportation sustainability fee of up to $9.71 per sq. ft. These fees are usually based on the gross square footage of the building, not just on the livable space. There are also transit center fees, open space fees, street tree fees, park fees, water capacity fees and wastewater fees. These are all in addition to the property taxes the owner of the development must pay on an on-going basis.

While not explicitly stated in the report, the reference to the taxes paid by the tenants implies that it is the tenants rather than the property owner who pays the property taxes on the multifamily housing property. It would then follow that the landlord should get no credit for funding the schools, parks, police, fire, street repair and other public services paid for with these taxes. While it is certainly true that taxes on businesses are just another expense that must be passed on to its customers, it is more usual to hear people calling for businesses to pay their “fair share” rather than for them to (sort of) admit that higher taxes on business result in higher prices for consumers.

A “fair” rate of return

In any case, the logic of the rent control advocates seems to be that the developer of a multifamily housing project should be entitled to a fair rate of return based on the cost of that project. That cost would be considered to consist of two separate elements, the land cost and the structure cost. If, in the future, rising costs for building materials or wage inflation drive the landlord’s costs up, he would be able to apply for an increase in the rents he can charge in order to compensate for those rising structure costs. However, if real estate prices increase generally, this increase would be attributed to rising land costs. The landlord would not be allowed to raise his rents in order to achieve a reasonable return on the increased value of his asset due to rising land costs since he would be seen as having played no role in creating the rise.

It is certainly hard to say that the taxes paid any given entity result in property prices rising generally. The rise is rather the result of the efforts of all residents and property owners in the area in maintaining their properties and paying for the services the government provides. Rising property values are also the result of businesses bringing high paying jobs to the area and of civic-minded individuals and businesses supporting the area’s cultural attractions, most of which cannot survive solely on ticket sales. Currently, all property owners share in land value increases or suffer from the declines (think Detroit) giving them an incentive to keep their neighborhoods attractive. The report’s authors seem to feel that they can reduce this incentive without consequence.

While California’s Proposition 10 would allow commercial property operators renting out shopping centers, business parks or hotel rooms to enjoy the benefits of rising property values, those renting out multifamily housing would be excluded from doing so. This is in the name of fairness but the view of what is fair depends on where you’re sitting.