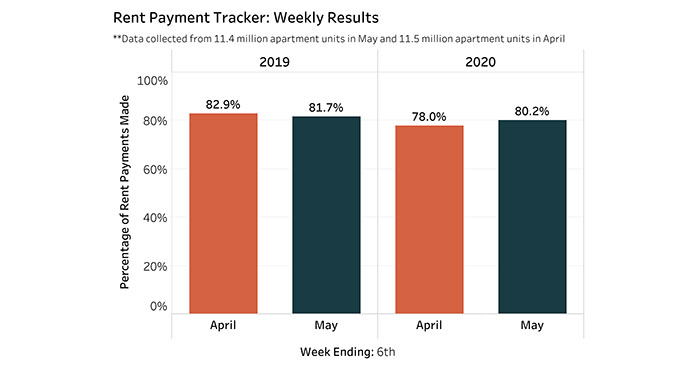 As in past reports, the data was collected from 11.5 million units managed using software from five major property management software providers. These companies are Entrata, MRI, RealPage, ResMan and Yardi Systems. Representatives of these companies attended the webcast accompanying the release of the data as did Sue Ansel, president of Gables Residential and Brad Cribbins, president of Alliance Residential Company.

Jeff Adler of Yardi systems attributed the good results to several factors. Among them are the residents working to meet their commitments, operators reaching out to residents, and government stimulus and unemployment checks arriving. He also noted that, while partial payments are counted in the results, they are not a huge factor. Most residents who paid made full payments.

Ansel said that their rent payments are at 91.5 percent collected by May 6. She attributed this to residents’ commitments to pay the rent in spite of COVID-19 impacting them. Cribbins said that their collections in May are running a little ahead of last month’s rate.

Brian Zrimsek of MRI pointed out that operational methods were in flux at the beginning of April as residents and apartment managers were adapting to the epidemic. This may have impacted the ability of residents to make their rent payments early in the month.  He said, “that first week of April, we had office changes, policy changes, process changes. It was just harder to get things done.” Having established operating procedures in place this month may be contributing to residents’ ability to pay the rent on time.

Both Cribbins and Ansel agreed that operating procedures were evolving in early April and that this may have had an impact on results. They also pointed out that their companies, and the multifamily housing industry in general, have made it a point to reach out empathetically to residents to point them to resources that may be available to them and to provide payment flexibility if they should need it. Both said that many more residents inquired about what payment flexibility was available to them than actually took advantage of it.

With regard to other emerging payment trends, Chase Harrington of Entrata said that the average rent paid has held steady, even if it has not all been paid at once. However, late fees are being waived, sometimes by local mandate. This, and reduced collections of amenity fees, has impacted some of the ancillary revenue from properties.

Elizabeth Francisco of ResMan agreed that their operators have not had to make widespread use of payment plans but that revenue per unit is down by about $100. Some of this has to do with reduced fees and ancillary revenue as Harrington stated, but some is also due to vacancies rising.

Greg Willett of RealPage addressed differences by geographic market. He pointed out that in April, New York, Los Angeles, Las Vegas and New Orleans consistently did less well than the rest of the country. Florida, which might have been expected to be part of this group from its employment mix, did relatively well in April. In May, Orlando and Ft Lauderdale have joined the four metro areas listed above in showing some softness. Surprisingly, the Seattle, San Francisco, Atlanta and Washington DC metro areas are also now below expected performance. They will bear watching to see if this behavior continues through the month.

To assess the industry’s health, Adler suggested that it is necessary to look at a wider range of data points. As examples of things to watch he said, “we’re beginning to see concessions rise in class A lease-ups. We’re beginning to see asking rent roll-downs start where they normally start, in class A, what we call lifestyle communities.” Adler noted that occupancy declines are starting at the higher end and that emerging stressors in the industry will play out over the next several months.

The NMHC rent tracker page may be found here.