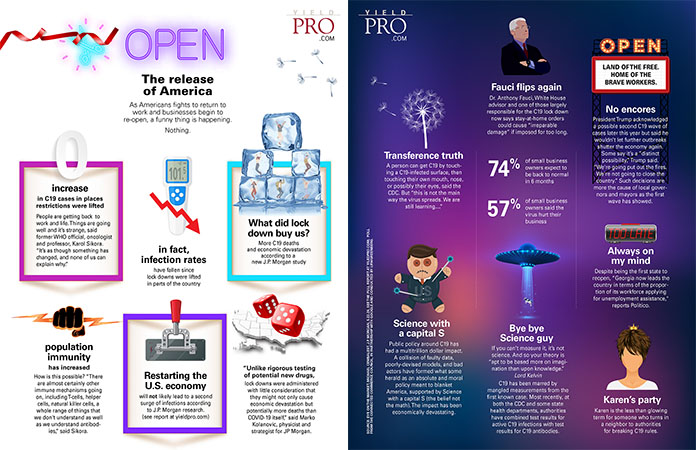 The release of America

As Americans fights to return to work and businesses begin to re-open, a funny thing is happening. Nothing.

0 increase in C19 cases in places restrictions were lifted People are getting back to work and life. Things are going well and it’s strange, said former WHO official, oncologist and professor, Karol Sikora. “It’s as though something has changed, and none of us can explain why.”

in fact, infection rates have fallen since lock downs were lifted in parts of the country

What did lock down buy us?

More C19 deaths and economic devastation according to a new J.P. Morgan study

How is this possible? “There are almost certainly other immune mechanisms going on, including T-cells, helper cells, natural killer cells, a whole range of things that we don’t understand as well as we understand antibodies,” said Sikora.

will not likely lead to a second surge of infections according to J.P. Morgan research. (see report at yieldpro.com)

“Unlike rigorous testing of potential new drugs, lock downs were administered with little consideration that they might not only cause economic devastation but potentially more deaths than COVID-19 itself,” said Marko Kolanovic, physicist and strategist for JP Morgan.

Dr. Anthony Fauci, White House advisor and one of those largely responsible for the C19 lock down now says stay-at-home orders could cause “irreparable damage” if imposed for too long.

A person can get C19 by touching a C19-infected surface, then touching their own mouth, nose, or possibly their eyes, said the CDC. But “this is not the main way the virus spreads. We are still learning….”

President Trump acknowledged a possible second C19 wave of cases later this year but said he wouldn’t let further outbreaks shutter the economy again. Some say it’s a “distinct possibility,” Trump said. “We’re going put out the fires. We’re not going to close the country.” Such decisions are more the cause of local governors and mayors as the first wave has showed.

57% of small business owners said the virus hurt their business

Always on my mind

Despite being the first state to reopen, “Georgia now leads the country in terms of the proportion of its workforce applying for unemployment assistance,” reports Politico.

Science with a capital S

Public policy around C19 has had a multitrillion dollar impact. A collision of faulty data, poorly-devised models, and bad actors have formed what some herald as an absolute and moral policy meant to blanket America, supported by Science with a capital S (the belief not the math). The impact has been economically devastating.

If you can’t measure it, it’s not science. And so your theory is “apt to be based more on imagination than upon knowledge.” Lord Kelvin

C19 has been marred by mangled measurements from the first known case. Most recently, at both the CDC and some state health departments, authorities have combined test results for active C19 infections with test results for C19 antibodies.

Karen is the less than glowing term for someone who turns in a neighbor to authorities for breaking C19 rules. 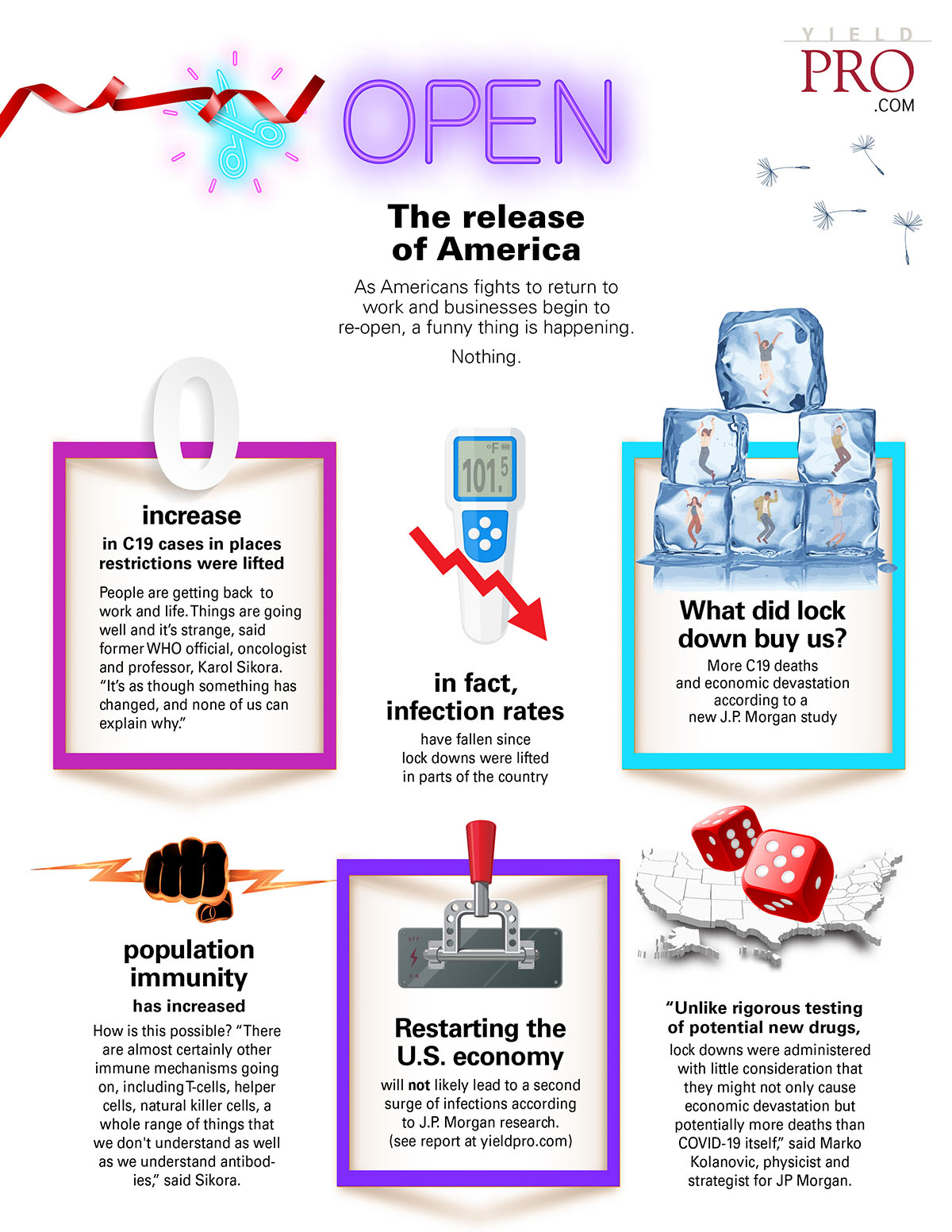 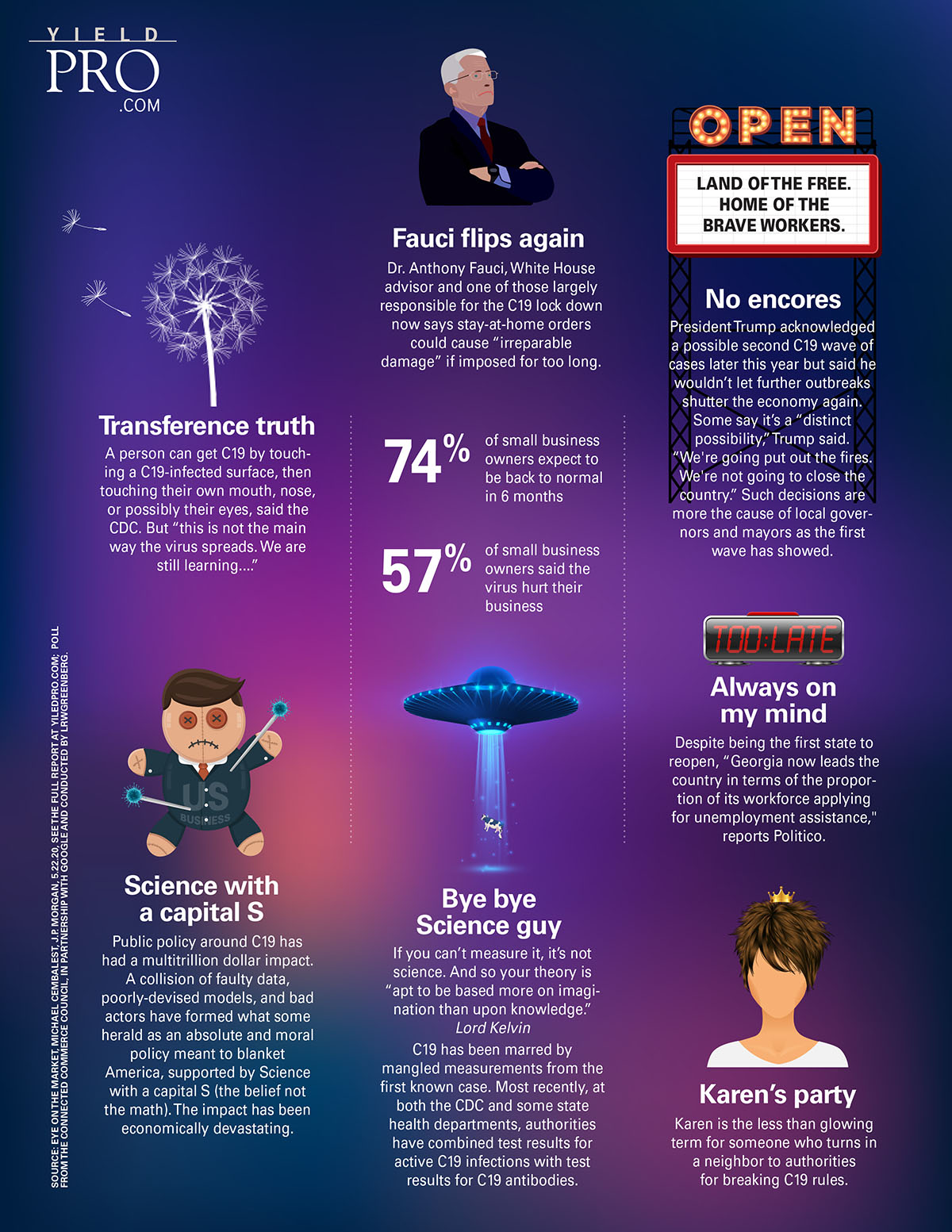