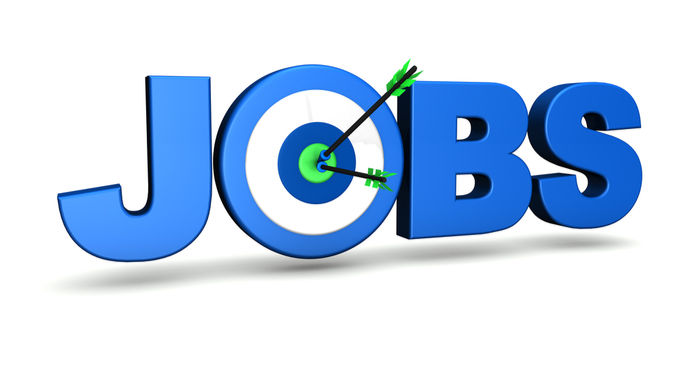 The latest Employment Situation Report from the Bureau of Labor Statistics shows that employment growth resumed in jobs categories of interest to builders and operators of multifamily housing in March.

The BLS reported that the US unemployment rate dropped to 6.0 percent in March, with total non-farm employment increasing by 916,000 jobs. The labor force participation rate is now at 61.5 percent, down 1.8 percent from February 2020. The number of people employed on non-farm payrolls is still 8.4 million lower than it was before the pandemic. 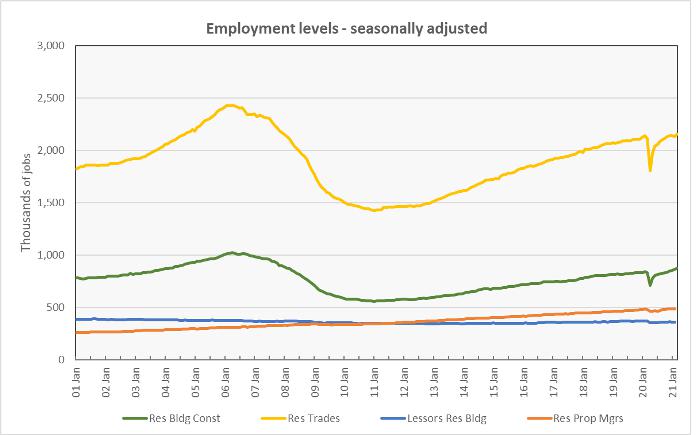 Employment in residential building construction in March, usually with general contractors, was up 1.2 percent from the revised employment level for February to 872,700 jobs. Employment in this category is now 3.9 percent higher than its level in February 2020, before the effects of the pandemic were felt.

Employment in residential building trades, i.e. plumbers, electricians, etc., in March was up 1.3 percent from February’s revised figure to a level of 2,157,600 jobs. The employment level in this category is now 0.8 percent above its level in February 2020.

Total employment in these two categories of residential construction jobs combined was up 1.2 percent in March from the month before.

Jobs also up in apartment operations

Employment for residential property managers in February was up 0.3 percent from its level in January at 485,000 jobs. Employment was also up from its year-ago level by 0.7 percent.

Total employment in these two categories combined is still 0.9 percent below its level in February 2020.

The final chart, below, presents the employment growth data in a slightly different format. It normalizes the employment levels in all four jobs categories to a reading of 100 for January 2015. This shows more clearly the relative magnitudes of the job losses during the shutdowns and strengths of the subsequent recoveries. 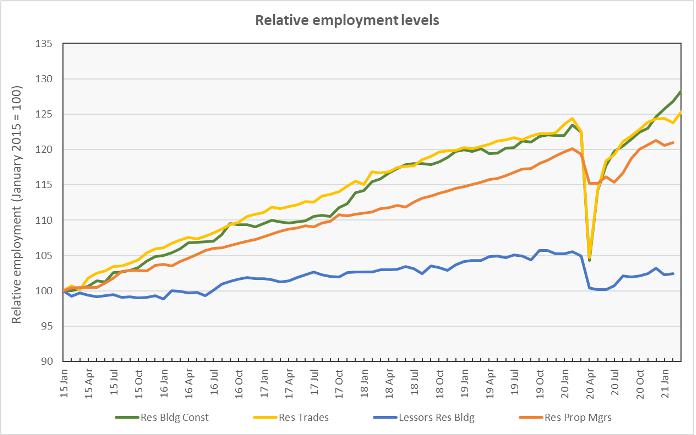