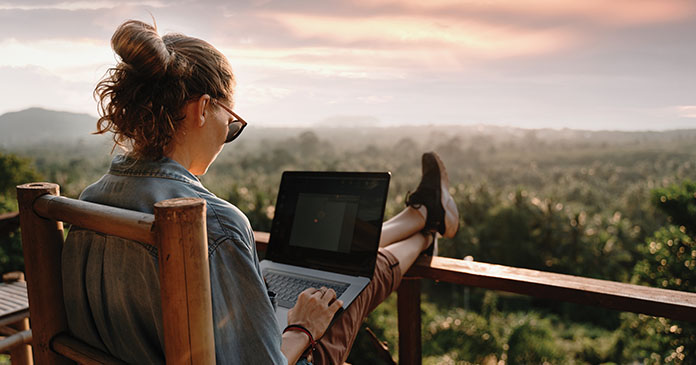 For all we know about our current housing market, the sources of demand, the supply headwinds and the changing financing landscape, one key variable has been unclear to us since the pandemic began: just how widespread will the remote work revolution be?

While market gravity appears to be shifting from big cities to suburbs, ex-urbs, and more affordable metros, the longevity of that trend will be determined, at least in part, by just how many workers can expect to stay remote either some or all of the time. While this question is still not fully answered, a new survey may show just how widespread this revolution truly is.

A survey of 5,000 workers by rental search platform Apartment List found that remote work is likely to remain an option for a significant amount of the American workforce.

The survey found that 19 percent of workers expect to have a hybrid work arrangement allowing for multiple remote days per week. Perhaps more importantly, it found that 21 percent expect they’ll have the ability to work remotely full-time. That means that roughly four in 10 American workers are less tethered to a specific place by work and one fifth of workers can be geographically agnostic as they decide to make their next move.

“This flexibility is going to allow them to be more flexible in their housing choice,” said Chris Salviati, housing economist at Apartment List. “We see that playing out in the survey data. We asked respondents, if they have the option to work remotely would that impact their living preferences?

“These indicators are confirming what we’ve been seeing for a while now: remote work is a trend that’s going to continue and have a lasting impact on where people want to live.”

The survey also studied moving preferences among remote and onsite workers. Among those who have already moved, the largest group of both remote and onsite workers moved to somewhere with more space. Where remote workers begin to stand out is in moving for access to natural amenities. Twenty-two per cent (22 percent) of remote workers moved somewhere with greater access to nature, as opposed to 12 percent of onsite workers. Salviati explained that there were similar gaps between remote and onsite workers who moved to be closer to family, to a more affordable housing market, or moving temporarily to wait out the pandemic. Those gaps do close up, though, when respondents were asked about future moving plans, which Salviati believes might indicate an appetite for urban amenities, even among workers no longer tied to a city.

Nevertheless, he believes that these results have key implications on a metro-market level, with those harder-hit dense urban markets more likely to struggle with less interest from a core group of remote workers who see the appeal of settling down somewhere more affordable. Those remote workers, Salviati noted, are actually higher earning on average than onsite workers, meaning those more affordable markets could see a significant influx of homebuyers and renters earning well above area median income.

Who will likely move?

The difference between hybrid and fully remote workers will also be crucial in determining the real impacts of this trend. Hybrid workers will still be somewhat tied to their office, and may be moving out to a wider zone around the city that’s still within a commutable distance. This could keep people tied to bigger cities and key job centers. The 21 percent of workers who are fully remote, conversely, will have more freedom. Survey results showed that among all respondents, 10 percent more said they would likely move if working remote full-time than if they were working remote on a hybrid basis.

Salviati noted that this trend will likely result in continued softness in the nation’s most expensive urban markets and the more affordable markets with the right appeal and amenities ought to benefit significantly.

“I think the places that stand to gain most are the ones that have a mix of affordability, some of those urban amenities and some natural amenities,” Salviati said. “This could play out in a few places that were already doing well pre-pandemic, like Austin and Nashville.”