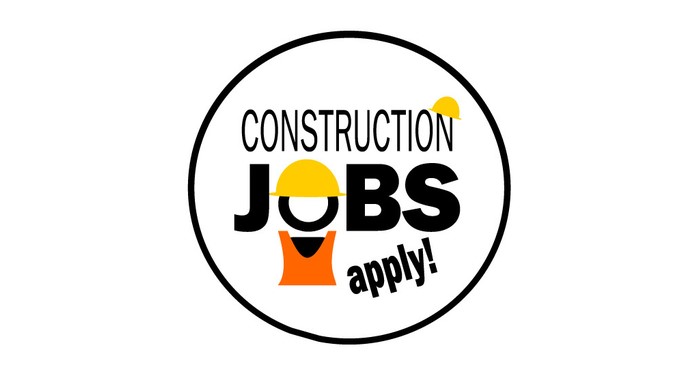 The Bureau of Labor Statistics (BLS) recently released the Job Openings and Labor Turnover (JOLT) report for May. Although last month’s report set a series record for the highest number of job opening, job openings were up fractionally again this month. However, construction job and real estate job openings were lower for the month.

The BLS reported that there were 9.2 million job openings at the end of May. This represents 6 percent of the total employment plus job openings. Within the nonfarm labor market, the number of people quitting their jobs declined almost 10 percent to 3.6 million, while the percentage of people who were involuntarily separated from their jobs hit a series low of 0.9 percent. The number of people hired for a new job in May was 5.9 million.

The first chart, below, shows the employment situation for the construction jobs market over the last 25 months. After a string of months with employment gains between May 2020 and January 2021, the construction jobs market has suffered a net loss in employment in 3 of the last 4 months. While February’s job losses can be attributed to a rise in separations, separations have fallen for the last two months. However, the pace of hiring has fallen even faster. 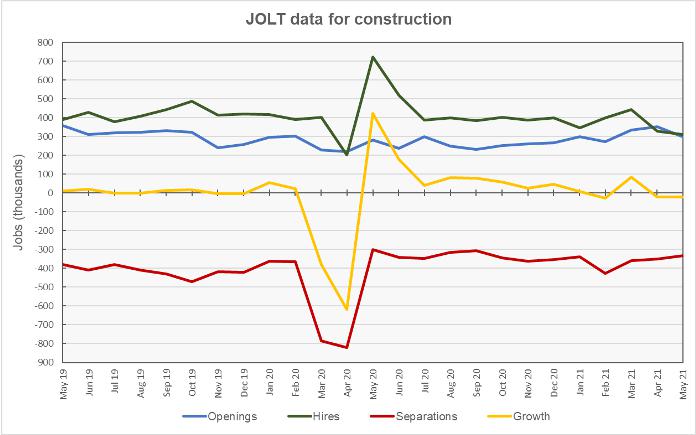 Openings for construction jobs fell 15 percent in May to 299,000 jobs. This is despite April’s figure being revised  downward by 6,000 job openings. Hiring was down modestly in May, falling 5 percent to 311,000 jobs.

Separations fell by 5 percent in May. Layoffs were nearly unchanged while quits fell by 9 percent. “Other separations” which includes retirements and transfers, were up by 20 percent, but they represent a small portion of all separations. Quits represented 53 percent of separations for the month.

The last chart, below, shows the employment situation for the real estate and rental and leasing (RERL) jobs category. Employment growth in this jobs category was again positive in May as a rise in hiring overcame an increase in separations. 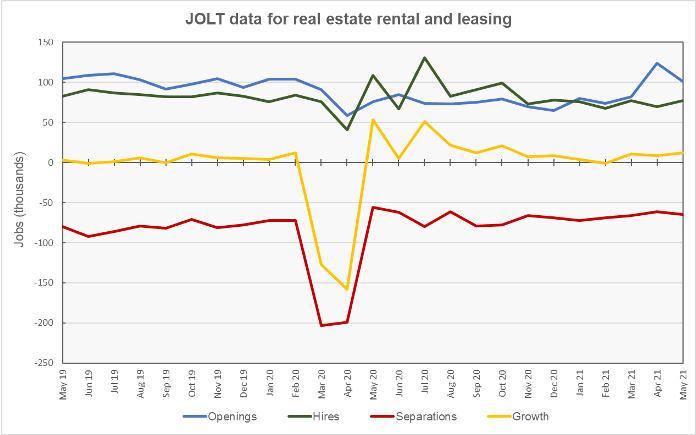 Hires in May were up by 10 percent to 77,000 while separations rose 7 percent to 61,000. The percentage changes are based on the revised figures reported for April. Quits again represented 70 percent of total separations in May, indicating that employees have plenty of job options to choose from.