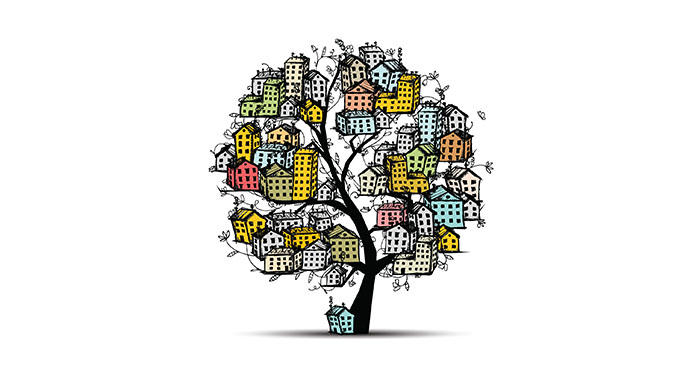 An old joke goes as follows:

Patient to doc: “Doc, it hurts when I do this.”
Doctor to patient: “Quit doing that.”

That joke applies to the issue of affordable housing. Many people talk about what governments at various levels should do to make housing more affordable. But government doesn’t really have to do anything.

The only thing governments need to do to make housing much more affordable is quit preventing people from building housing.

I live in California, where local governments and the state government have perfected the art of preventing housing from being built. The results have been predictable: as restrictions on building have increased over the years, housing prices, adjusted for inflation, have risen.

Consider my modest home in coastal California. It’s about 1,800 sq. ft. and is a fine home, but almost no one would, upon entering, say “ooh, this is really nice.” Yet Zillow tells me that it’s worth about $1.3 million.

Would my net worth suffer if governments allowed more housing? Absolutely. But it’s also true that my daughter, who pays an incredibly high rent for a small apartment unit, would find it easier to stay in California rather than move to another state. Other parents are in similar situations.

The effects of restrictions

Many people believe that the main reason housing is expensive in coastal California is that land is scarce. As the saying goes, “They’re not making any more land.” That view is plausible. It’s also incorrect.

Two economists who study U.S. housing are Ed Glaeser of Harvard University and Joseph Gyourko of the Wharton School. Some years ago, they did a study that used a clever method of separating the effects of scarce land from the effects of restrictions on building. They looked at houses that were comparable in size, amenities, and location but that differed in one main respect: one had much more land than the other.

If scarcity of land were the crucial factor, then a house with much more land should sell for a much higher price. But that’s not what they found.

Instead, a house with a quarter acre of additional land sold for only about $10,000 to $20,000 more. But, they found, a quarter—acre empty lot on which building was permitted often sold for over ten times that amount. That means that the key driver in high house prices is not scarcity of land but scarcity of building permits.

Economists have known this for a long time. One who pointed it out early in his career was Lawrence Katz of Harvard University. In 1981, because Katz graduated as the top economics undergraduate at the University of California, Berkeley, he was given the honor of making a commencement speech.

He devoted the whole speech to pointing out to his audience that a key cause of high housing prices in the San Francisco Bay Area was government restrictions on supply.

He noted that just ten years earlier, the median price of a California house was not much above the national median. But government restrictions on building had grown all through the 1970s.

So what should be done? That’s the wrong question. As the doctor joke above reminds us, the better question is “what should the government quit doing?” The answer is that it should quit restricting, or at least drastically reduce restrictions on, building houses and apartments.

As it happens, California legislators have started moving in that direction. The first major step was taken over four years ago. California’s Senate passed a law that nullified the various restrictive permits and high fees that discouraged homeowners from building what are technically called accessory dwelling units but are colloquially called “granny units.”

In the past two months, moreover, the California legislature has moved quickly to reduce even further state and local restrictions on building.

In September, fresh from defeating the recall election against him, Governor Gavin Newsom signed Senate Bill 9, a bill that abolishes single-family zoning. The bill allows homeowners to subdivide their lots and/or to convert homes to duplexes. A homeowner could conceivably split a lot into two lots and allow a duplex on each lot, effectively increasing the number of housing units by 300 percent.

It’s difficult to know how much new housing will result. One limit is that SB 9 exempts single-family lots in historic districts, fire hazard zones, and rural areas.

Still, that would seem to leave lots of lots (pun intended) in which homeowners can add housing units.

Slate reporter Henry Grabar, who is skeptical about how many new units will be built, writes, “On millions of parcels, the possible revenues from a duplex just aren’t high enough to justify the investment.” But Grabar also points out that governments in California grant permits for only a measly 100,000 units per year. If even 500,000 homeowners decided to build an additional unit each year, that would increase by 500 percent the annual number of new units built.

One objection to allowing more permits that I often hear, especially from people on the left, is that because many permits now are for “luxury” housing, allowing more such permits will do nothing for people who want non-luxury housing. That’s false.

Before looking at the evidence, I’ll consider a case that pretty much everyone understands: the market for used cars.

Question: Do we ever see relatively low-income people driving Cadillacs or Lincoln Continentals? Yes, we do. But the cars are typically not new ones; they’re rather old.

Everyone understands why: a ten-year-old American luxury car sells for a fraction of what it sold for when new.

The same reasoning applies to housing. When relatively wealthy people buy a new “luxury” house, they typically sell a “used” house. Then the person who buys that house sells a somewhat lower-valued house. Through a chain of “sell-me-downs” (as opposed to hand-me-downs), those who are not wealthy get a house that would not have been on the market if not for the luxury house being built and sold.

Recently economists have found evidence that allowing the supply of luxury housing to increase causes a chain reaction, freeing up housing for lower-income people.

Lee also cites a study by, that finds similar results for the U.S. market.

In recent years, governments in California and elsewhere have used “inclusionary zoning” as a way of getting more affordable housing. The word “inclusionary” is a euphemism for price controls. Builders subject to inclusionary zoning must set aside a percentage of new houses to be sold at below-market prices to people whose income is below a certain level.

Inclusionary zoning hasn’t worked. Economic analysis explains why it shouldn’t have been expected to work. In Housing, published in David R. Henderson, ed. The Concise Encyclopedia of Economics in 2008, economists Benjamin Powell and Edward Stringham write:

“Inclusionary zoning produces negative effects similar to those caused by other price controls. Price controls restrict the supply of new homes and actually make housing less affordable. Because builders are forced to sell a portion of a development at a loss, inclusionary zoning functions as a tax on new construction. Estimates of the level of the tax in California cities such as Portola Valley are above $200,000 per market-rate home.

To maintain normal profit margins, builders end up passing the tax on to landowners and other home buyers. Elasticities of supply and demand determine exactly how the burden is split, but the result is almost certainly higher home prices.”

And that’s if it’s not corrupt. If local government officials have some discretion about who gets the favored housing, they have an incentive to rig the outcome.

The issue of local control

I tend to believe that the lower the level of government that deals with an issue, the better. So, why do I make an exception in this case, favoring the state government’s nullification of local government rules?

The reason is that the local rules are stacked against people who aren’t already homeowners. They have little say in the process and homeowners trying to maintain the character of a neighborhood dominate.

Do I worry that this sets a dangerous precedent for state government takeover of other local functions? I do. But how many more decades do we need to wait until local homeowners become substantially more tolerant of new housing?

Moreover, in many policy areas, the precedent of state government dominating local government has already been set.

Of course, we wouldn’t even need state governments to nullify local restrictions if property rights received strong protection from governments at all levels. Then people would be free to build.