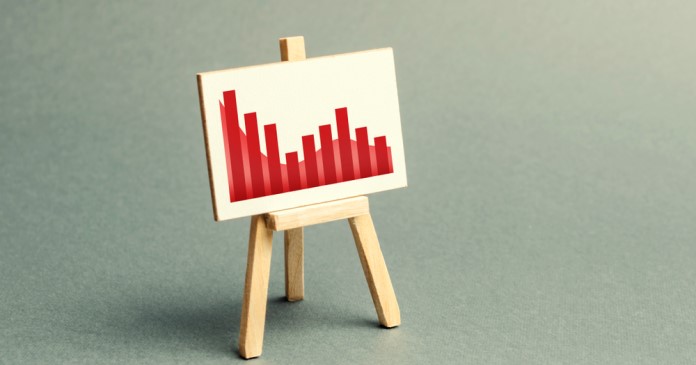 The latest forecasts from Fannie Mae and from the Federal Reserve foresee higher inflation than in earlier forecasts. They predict that rising interest rates will slow the economy, although they disagree on how much.

Fannie Mae issues monthly forecasts for the economy and for housing production. The forecasts provide both quarterly and annual estimates for standard economic metrics and currently run through the end of 2023.

The forecast from the Federal Reserve (Fed) was released in conjunction with the recent meeting of the Federal Open Market Committee (FOMC). The FOMC meets 8 times per year but only releases an economic forecast at 4 of the meetings. The Fed forecast presents both estimates for economic metrics by year through 2024 and also a “longer run” forecast. The consensus Fed forecast is developed by the combining the forecasts of 18 economists. Each of the economists assumes that the Fed will follow “appropriate” monetary policy during the term of the forecast, although their individual ideas of what that policy is may vary.

The Federal Reserve’s preferred inflation measure is based on the Personal Consumption Expenditures (PCE) survey, rather than on the more familiar Consumer Price Index (CPI). Both the Fed and Fannie Mae provide forecasts for inflation as measured by the PCE, so that will be the index discussed here. 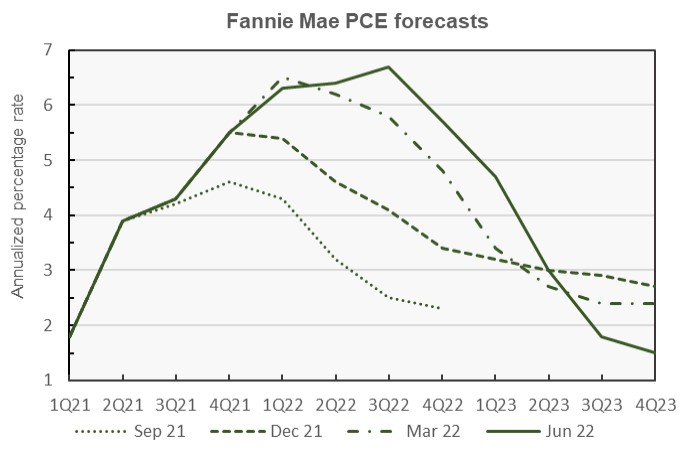 The history of the Fed’s recent inflation forecasts is shown in the next chart. In June, the Fed once again revised its inflation forecast for 2022 higher as the persistence of the inflation they once characterized as transitory becomes apparent. The Fed now expects year-end inflation in 2022 to come in at 5.5 percent. It is expected to fall to 2.6 percent in 2023 and to 2.3 percent in 2024. 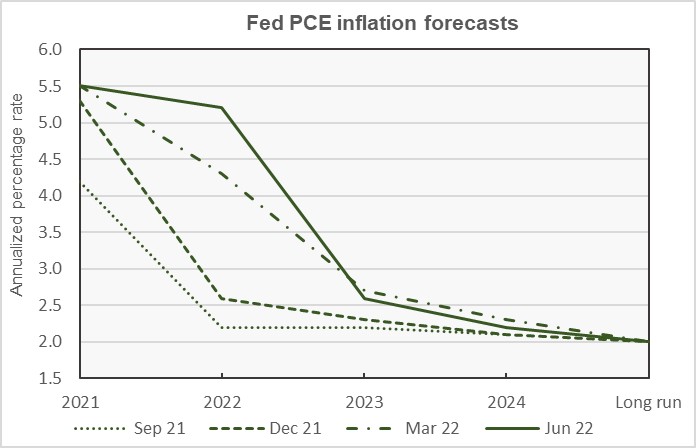 Interest rates on the way up

The big news coming out of the recent Fed meeting was their announcement of a 0.75 percent interest rate hike, the largest in nearly 30 years. This follows on top of rate increases of 0.25 percent and 0.5 percent at the last two Fed meetings. 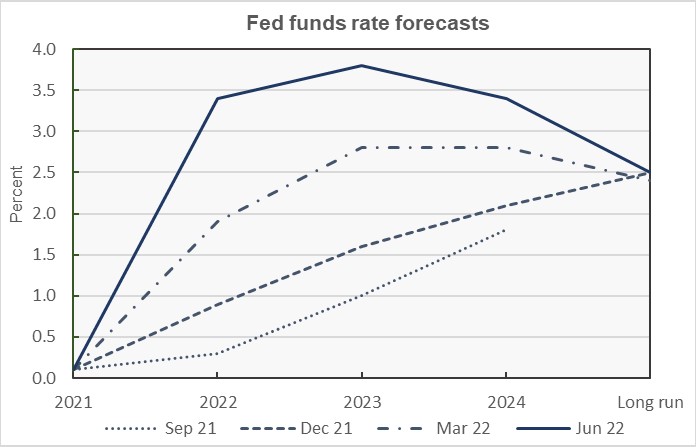 Fannie Mae’s recent forecasts for GDP growth for Q1 2022 were impacted by the Omicron wave which caused the economy to shrink more than they had anticipated. While the Omicron wave is largely over, Fannie Mae expects that future growth will be slowed as the Fed fights the inflation that has taken hold in the economy. Fannie’s recent forecasts have called for the economy to go into recession in the second half of 2023 and that has not changed in the current forecast. This is shown in the next chart, below. 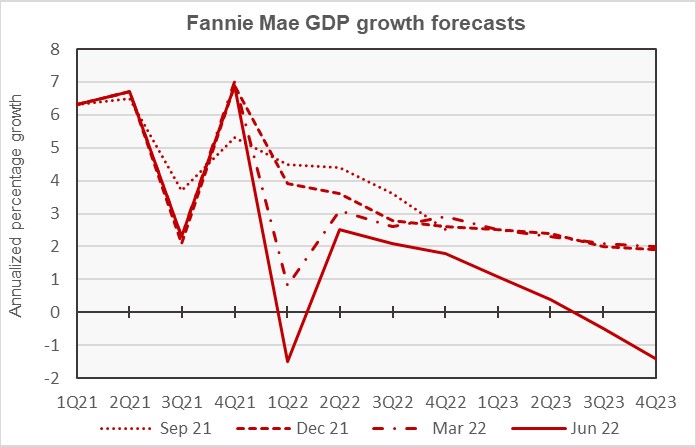 The Fed does not release quarterly projections, instead focusing on each year as-a-whole. The Fed’s current forecast for GDP growth in 2022 is 1.7 percent, down from the 2.8 percent they forecast in March, but higher than Fannie Mae’s prediction. The Fed also forecasts that GDP growth will be 1.7 percent in 2023, significantly higher than Fannie Mae’s prediction. Recent Fed GDP forecasts are illustrated in the next chart, below. 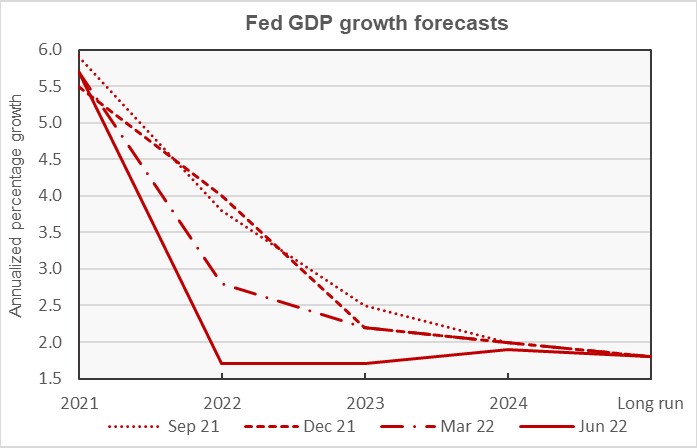 The Fed seems to think that they can achieve a “soft landing” for the economy, where they get inflation under control without triggering a recession. Fannie Mae does not seem to think that the Fed will be able to achieve that feat.

The new forecast from Fannie Mae calls for the unemployment rate to rise in 2023 as the economy cools under the influence of higher interest rates. This is shown in the next chart, below. 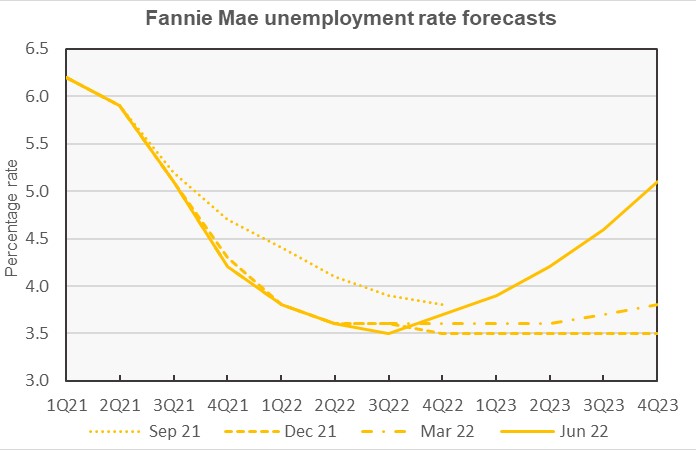 The annual unemployment rates predicted by the Fed and by Fannie Mae for 2022 are the same, 3.7 percent. However, the Fed forecasts that unemployment will rise to only 3.9 percent in 2023 while Fannie Mae expects that it will reach 4.5 percent. 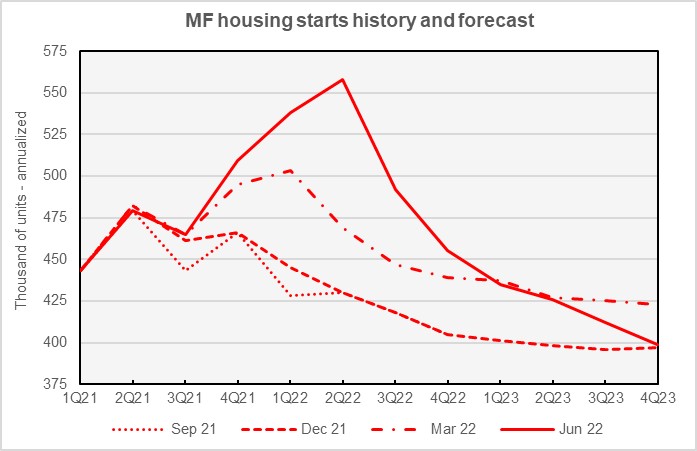 Fannie Mae’s current forecast for the single-family housing construction market is shown in the next chart below, along with older forecasts. The chart illustrates that Fannie Mae has taken a much more pessimistic view of this market recently as the anticipated rise in interest rates takes effect. 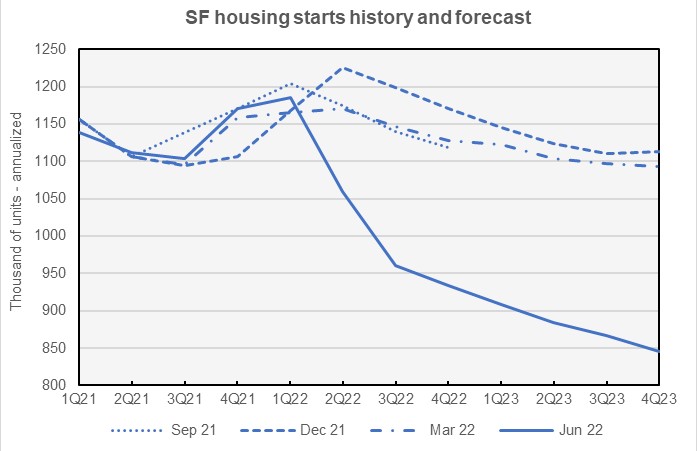