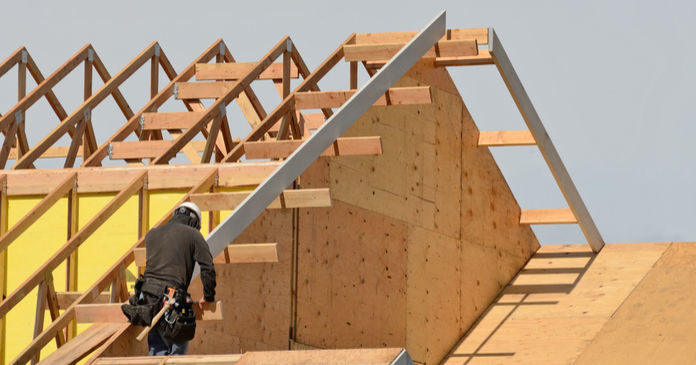 The Job Openings and Labor Turnover (JOLT) report for January was recently released by the Bureau of Labor Statistics (BLS). Its data on the parts of the job market of interest to the multifamily industry, real estate management and construction, show continued employment gains in both areas.

The BLS reported that there were 7.6 million job openings, both private sector and government, at the end of January. This number is up from the 7.3 million openings reported last month and represents 4.8 percent of the labor force. For reference, the latest reading pegs the unemployment rate at 3.8 percent, so there continues to be more jobs available in the economy than there are people to fill them.

The multifamily jobs market is tracked in a part of the overall jobs market the BLS calls “real estate and rental and leasing” (RERL), which also includes similar businesses in other industries. The jobs data for this segment showed growth again in January, if at a slower rate than the recent pace. The RERL jobs market has shown growth since last summer.

While job openings in the RERL sector jumped in January, hires rose more modestly. At the same time, separations increased after a lull in December. In spite of this increase, the employment in the RERL jobs sector increased for the month.

In looking at the people who left their jobs in January, we find that the number of people leaving voluntarily increased more rapidly than did the number who lost their jobs. Still, the ratio of voluntary to involuntary departures in the multifamily jobs market has recently been hovering around 2 to 1. This is down significantly from last summer when the ratio was closer to 4 to 1.

The following chart shows the employment data for the RERL jobs market for the last 13 months. 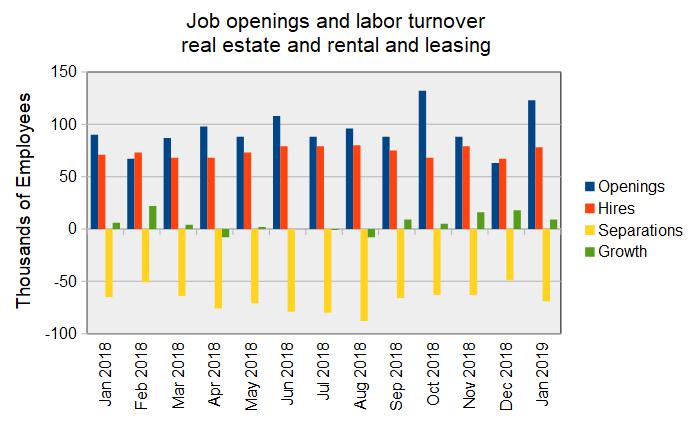 The next chart shows the turnover in the construction jobs market. Earlier reports had shown a net loss of construction jobs in November but revisions to the data have erased this loss. The latest data indicate an unbroken string of job gains in construction since a one-time drop in March of last year. Opening and hiring are up, especially when compared to the start of 2018. Unfortunately, so are job losses, with the rise being more due to increased involuntary separations rather than people voluntarily leaving. 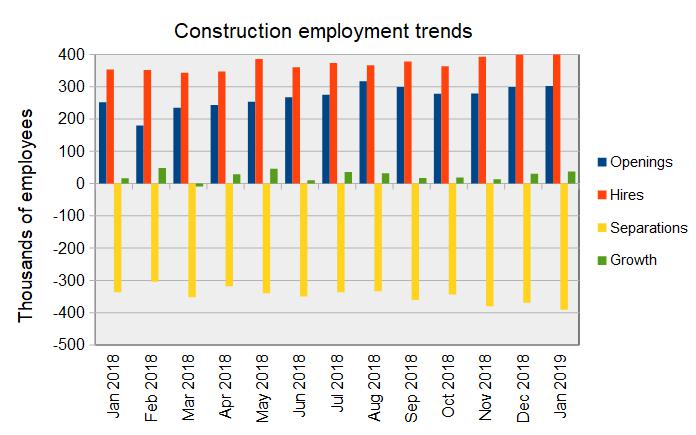 The numbers of hires and separations occurring every month in the construction jobs market set it apart from many other fields of employment. In few other industries do the numbers of hires and separations every month exceed the number of job openings for the month. The following chart compares these measures for the construction sector to those for the entire private jobs market. It makes it clear how different it is to work in construction than in most other fields. Perhaps this relative job instability is a reason that businesses are having trouble attracting new workers to the field. 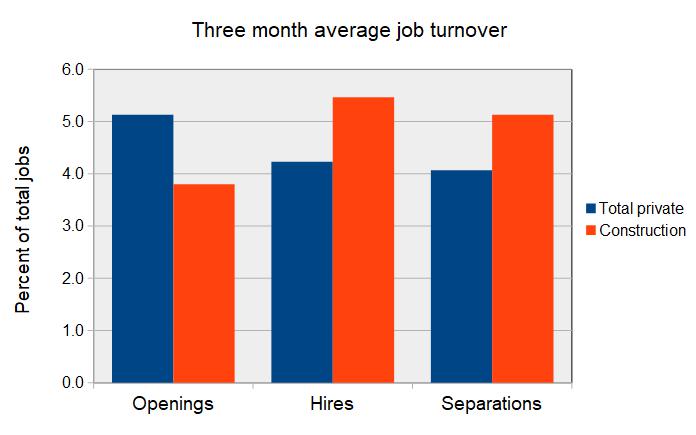