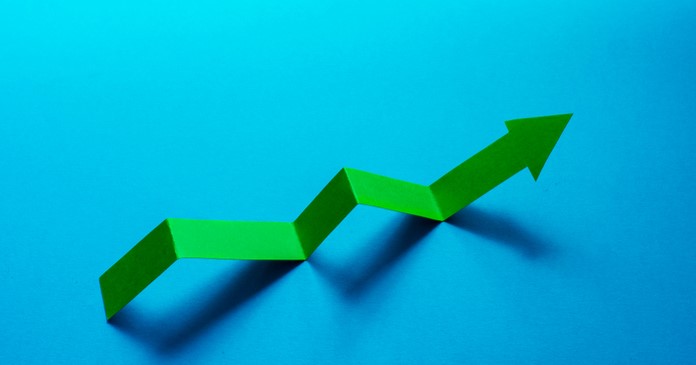 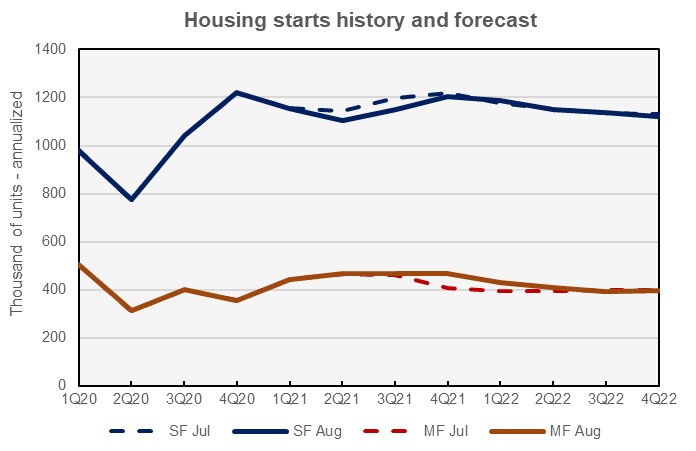 For the second month in a row, Fannie Mae has made significant changes to their forecast for GDP growth. This, along with forecasts for unemployment and inflation, is shown in the second chart, below. 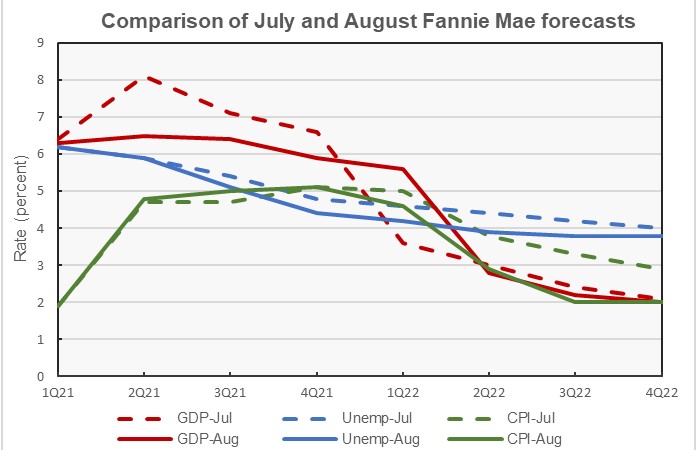 The revision to the GDP forecast for Q2 2021 may have been driven by the Bureau of Economic Analysis releasing their advance estimate for Q2 GDP, which came in at 6.6 percent, annualized. Two months ago, Fannie Mae was forecasting this number to be 10.1 percent and last month they forecast it to be 8.1 percent. The spike in COVID cases that started in July along with the supply constraints that have developed in the economy are cited as factors impacting near-term growth. However, inventories are currently at very low levels and restocking may give a bump to growth in the future once supply chain issues are resolved.

On an annual basis, Fannie Mae now expects GDP growth for 2021 to come in at 6.3 percent, down from a forecast of 7.1 percent last month. However, 2022 GDP growth is now expected to be 3.2 percent, up from the 2.8 percent rate forecast last month.

The July forecast for unemployment had slightly higher rates across the board. This is illustrated in the chart, above.

Inflation forecast is for lower later

The sharp rise in the rate of inflation in May took most forecasters by surprise. A question that it raised for them is: how long will the period of higher inflation last? In the August forecast for quarterly change in the Consumer Price Index (CPI), Fannie Mae answers that the rise in inflation will be relatively short-lived. By the second half of 2022, they are now not only projecting that inflation will be well below the rate they forecast last month, as shown in the above chart, but also that it will be below the rate they were forecasting in May, before prices jumped. The current forecast for CPI inflation in Q3 and Q4 2022 is now 2.0 percent for both quarters. This compares with forecasts of 2.3 percent and 2.2 percent made in May and of 2.9 percent and 2.7 percent made last month.

The Fannie Mae Multifamily Market Commentary discussed the relatively high volume of multifamily housing units brought to market over the past few years. While deliveries have been high compared to the recent past, they have only been half the levels reached in the 1970’s. However, this time around, much of the new supply is coming to only 20 or so metros. This includes some, like New York City, which have recently seen rising vacancy rates. Still, Fannie Mae expects the new supply to be absorbed, although there could be some near-term pressure on occupancy for Class A properties since most of the new supply is concentrated in that segment.